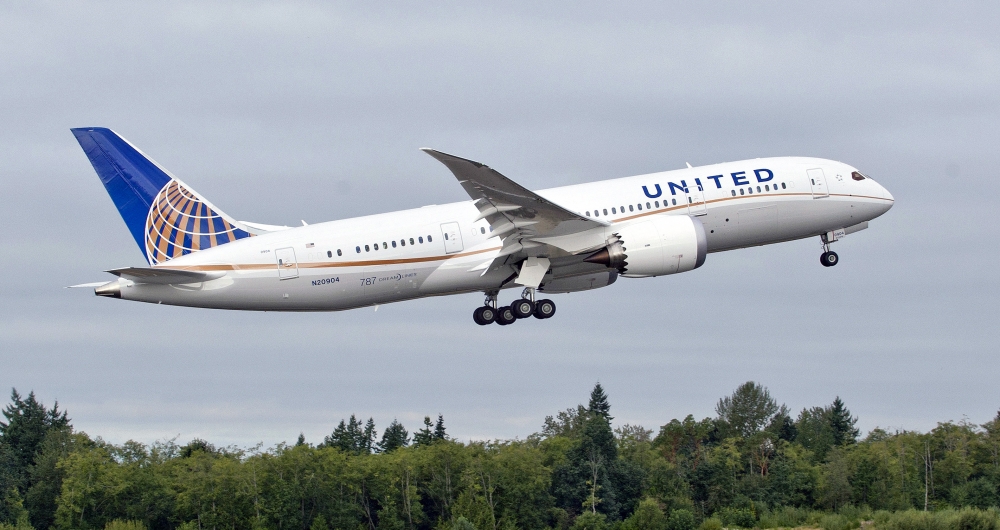 If you’ve flown a long haul of late you’re probably intimately acquainted with jetlag – a flurry of fuzzy-headed symptoms such as headache, dry eyes, dry nasal passages and exhaustion. Modern airliners give you jetlag. They’re the result of dry cabin air, 8,000-foot cabin altitude, noisy surroundings, perfume and alcohol fumes in the air and invasive lighting.

There’s a cure to jetlag. It comes in the rapier-like guise of the Boeing 787, a.k.a. the Dreamliner. This AirlineRatings.com reporter recently flew United Airlines Flight 9 on its inaugural run between San Francisco and Chengdu, China – a formidable 13-hour, 12-minute, 5,978-mile journey that will test the stamina of the most seasoned frequent flyer.
This particular 787-8 is one of ten the airline flies. United has on order 55 more, including some larger 787-9s. The airplanes are designed to fly far-flung routes and open new markets, such as Chengdu. Many flyers have never heard of Chengdu, a city of 14-million-plus souls in the far western reaches of China. The environs around CTU (that’s the city’s airport code) are the birthplace of baby Pandas, hot Sichuan cuisine, and 80 percent of this planet’s iPads. Fortune 500 companies love China’s fourth-largest city. That’s why United is there.

Captain Andrew Raymer, United’s 787 lead line check airman, is in command of this launch flight. It’s an “up and over” affair that tracks north from San Francisco over the Gulf of Alaska, flies close to Anchorage, crosses the Bering Straight, enters Russian airspace and gives wide berth to North Korean territory. Then it enters the skies above China before beginning its descent from 40,000 feet (more on that later) to Chengdu.

‘Scalded Hawk’
Powered by a pair of General Electric GEnx-1Bs, we race down the runway at SFO and are airborne in a scant 40 seconds. That’s impressive. Raymer says Flight 9 is a mere 6,000 pounds under its maximum takeoff weight of 502,500 pounds, laden as it is with a full load of fuel, 231 passengers and crew and their baggage.
If takeoff roll is short, subsequent ascent to cruise altitude is astonishing. It climbs like a scalded hawk. “The performance of this aircraft is outstanding,” says Raymer. On domestic runs out of Houston, “We got to 41,000 feet in 13 minutes.”
Hush, the guy across the aisle can hear you
Were it not for the angle of ascent, or the flight-tracking map on your video screen, you wouldn’t know how fast you’re clawing your ways into the heavens. That’s because the big GEnx-1Bs are so quiet. Matter of fact, everything is hushed.
“The noise level on this airplane is extremely low,” says Raymer, standing beside the forward port-side (left-hand) door. Up on the flight deck, which we were not permitted to visit during flight, the noise is but 74 decibels – and that’s at nine-tenths the speed of sound. Captain Raymer compares the ambient noise to that of “a luxury car on the highway.”
“That means we can speak in conversational tones on the flight deck. Going as fast as we are right now in a traditional airplane (say a 777), we couldn’t stand next to this door and have a conversation,” he says. “It would be too noisy.”
If the noise level up front is good, so too is the level throughout the airplane.
Here’s why things are so hushed . The fuselage of the 787 is composed largely of composite material, not aluminum. That means there are no seams on the outside of the airplane to disrupt the airflow – no rivets, no tiny bumps. The cockpit’s windows have no corners. “If we painted the windows,” says Raymer, “you couldn’t tell where they are. That’s how flush they are.” And how flawlessly aerodynamic. The net result of all this noise dampening is, “Your ears don’t ring after a 13-hour flight.”
No hype; he’s right.

Moisture makes a difference
Most airplane cabins are desert dry. Not so the seven-eight. Raymer says the cabin humidity level in earlier-generation, largely-aluminum aircraft is about two percent. There are a couple of reasons for that: designers don’t want moisture introduced into an environment, where it can spawn rust. Second, says Rymer, is that “on previous generations of aircraft they use hot [‘bleed’] air from the engines to pressurize the cabin.” The 787 doesn’t work that way. “This aircraft doesn’t use engine bleed air,” says the captain.
In contrast to most airplane’s two percent humidity, the 787’s cabin contains six to seven percent. “It makes a big difference,” says Raymer.
Then there’s the altitude itself. On the same segment we’re flying, the pressurized altitude in the cabin would be about 8,000 feet above sea level as the airplane itself flies at 37,000ft. “Right now,” smiles Raymer, it’s about 5,700 feet. “That [means there’s] a tremendous difference in the fatigue level when you arrive.”
Most people get mild altitude sickness – headaches – above 6,500ft. You don’t get altitude sickness in the 787.
Such is the pilot’s perspective. While indispensable and hard working, he’s not on his feet pushing carts up and own the aisle of the 186-foot, 1-inch airliner, serving 36 folks in BusinessFirst and 183 in United Economy and Economy Plus. Flight attendants fight a different sort of fatigue, one born of pure physical exertion. Steve Nauck is United’s International Service Manager for Flight 9 and he’s sold on the airplane. “I feel comfortable getting off the aircraft after a 13-hour flight. When I complete a trip, I don’t feel wiped out like I would if I was flying on a 777 or 747. I don’t have that same feeling.”
Nor does Flight Attendant Joey Cheng, another 787 veteran. She says, “You can feel the moisture in your skin after a long seven-eight sojourn. It’s not…as dry as the other aircraft.”
She’s right. This reporter’s nasal passages went predictably arid on the five-hour connecting flight earlier in the day from Atlanta to SFO. Five hours into the Chengdu leg, it was if I were sitting poolside (well, almost).

Let there be clean air
One of the big challenges for airplane manufacturers is to get volatile organic compounds (VOCs) out of the cabin. Boeing was very surprised that VOCs, more than humidity, affect how people feel at the end of a flight.
Airplane builders have done a good job with particulates (airborne particles) using High Efficiency Particulate Filters (HEPA) but getting gaseous contaminates out of the air has been more of a challenge – but one of real importance. During the development of the 787 Boeing found that data coming from its cabin test chambers showed that VOCs were contributing more to people’s feelings of being dried out than earlier thought. VOCs dry you out and alcohol is an astringent and you even get alcohol from the handy wipes that they hand out at meal time. But it is not just alcohol. There is also hair spray and perfume. So in a world first for commercial airplanes, Boeing has installed a filtration system that removes gaseous irritants and odors from the airplane cabin, as well as allergens, bacteria and viruses.

And Let there be light
Light on the Boeing 787, manmade and natural, is largely lovely.
Ever been jolted awake when flight attendants threw on the cabin lights for breakfast? The 787 doesn’t startle. International Flight Attendant Art Yago can gradually introduce “A [bit of blue] at sunrise, like we’re getting up. People’s bodies will be like, ‘We’re getting up from a long night’s sleep. It’s morning time and it’s breakfast.’ It’s modern LED lighting. We can control it by zone.”
Then there are the windows. They’re far larger, and there aren’t any physical pull-down shades. Instead you dim them electronically, from open wide to deep sunglass dark.
But in this writer’s view, there’s a tweak or two required to make the system work as well as it should. When the sun is rising or setting, shining bright on the side of the aircraft where you’re sitting, the windows don’t go fully dark. To be sure, the sun is muted, but it’s still there and I wasn’t about to stare at it, no matter how much shade the dimmers impart. Steve Nauck says United is looking into whether passengers would prefer some sort of window shade, “because they’re not getting 100 percent dark on the side of the airplane where the sun is.”

Certainly the sunlight is a lot purer at the 40,000-foot altitude where the 787 operates, leaving lesser flying machines thousands of feet below. “Across the North Atlantic and the North Pacific we’re up here around 38,000, 39,000, 40,000 feet going across the ocean,” says Captain Raymer. “All the other earlier-generation aircraft – the Airbuses and the earlier Boeings – they’re 32,000, 34,000, 35,000 feet at the highest.” And that ability to climb higher has some great spin offs. Depending on air traffic control clearance, the 787 has the ability to seek out smoother air.

Atmospherics are one thing, but how about that lithium-ion battery problem that impacted the Boeing 787’s early last year? Raymer addresses the issue hear-on. He asserts he’s “absolutely” confident in the fix that followed two early incidents. “They redesigned the batteries,” he says. “And as a last defense they put a steel box around the batteries that vents out anything that comes out of the battery overboard.” Andrew Raymer, a 22,000-flight hour pilot-in-command doesn’t take safety lightly. “They have it all straightened out,” he contends, “It’s a very strong system.”

And, just now, the Boeing 787 is a very strong card to play when penetrating the precincts of places such as far western China. “It’s 15 points above other aircraft in the fleet in customer satisfaction,” says the captain. “Customers like it. Pilots like it. The crew likes it. I think the board of directors will like it. Because it’s going to make a major contribution to our bottom line.”
And the bottom line is that passengers love it.

The author was a guest of United Airlines in its BusinessFirst cabin.