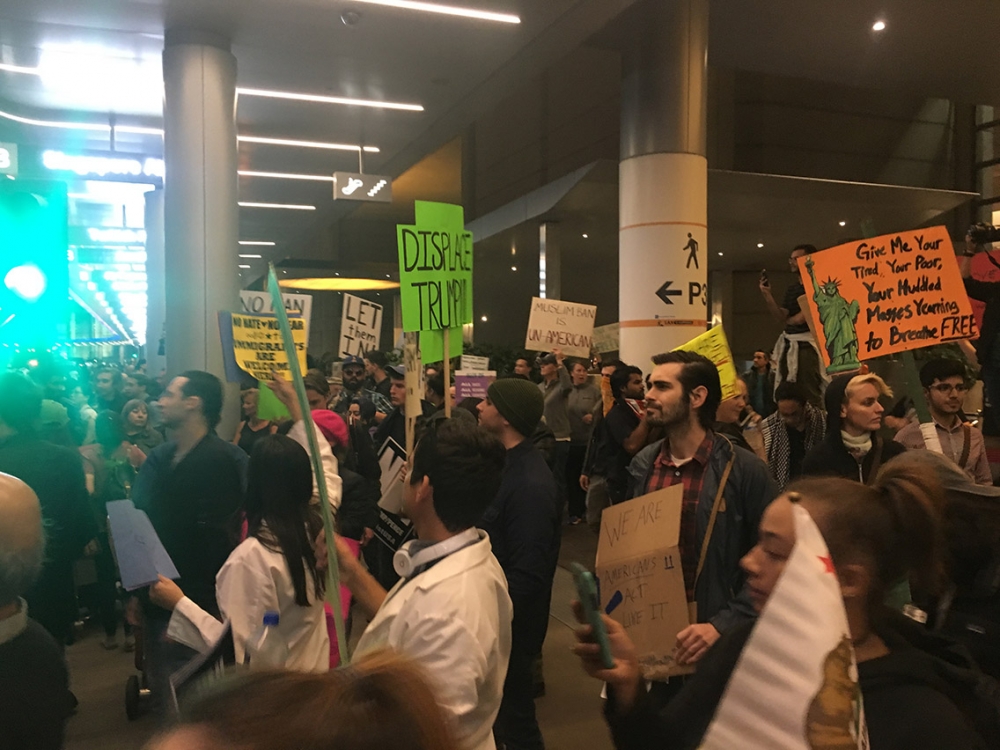 The first demonstrations erupted on Saturday the day after Trump signed the order banning travel to the U.S. by citizens of Syria, Iraq, Sudan, Libya, Yemen, Iran and Somalia.

At Los Angeles International Airport many intending passengers were forced to abandon their taxis or buses and walk to the terminal.

The traffic gridlock also trapped airline crews with many flights delayed because of their late arrival.

The demonstrators were peaceful but extremely noisy.

Police was equipped with riot gear but took no action.

Many of the signs read “We are all immigrants in America” and Let them go” referring to those travellers who were on route to the US when the ban was implemented.

Other signs suggested the ban was reminiscent of the Nazi regime of the 1930s and labelled Trump’s chief strategist Stephen Bannon, who has just been appointed the Security Council a Nazi.

On Saturday, a Federal Judge in New York issued an order blocking the government from deporting passengers with valid visas who arrived after the travel ban was implemented.

However, confusion remains on the temporary ban, while the courts of Virginia, Washington and Massachusetts took similar action.

A solution in the courts may take weeks to resolve commentators suggest.

According to Associated Press Chicago Cardinal Blase Cupich, said on Sunday that the Trump’s measures were “rushed, chaotic, cruel and oblivious to the realities” of security.

They had, he added, ushered in “a dark moment in U.S. history.”

Airlines were warning passengers to get to the airport early during Sunday afternoon but not all could be contacted.

Demonstrators say the campaign of disruption will last 30 days and impact other international airports such as San Diego, Seattle and San Francisco.