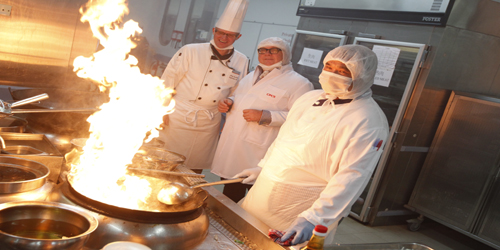 Every day over 8 million people board 100,000 flights across the world. It’s a sign that flying has become an ordinary part of life for many people.

Far less ordinary are the mind-bogglingly complex systems needed to look after the millions of passengers. Keeping them fed and watered is a hugely important part of airlines’ operations as AirlineRatings.com found out when it visited two of the world’s biggest kitchens. See the video at the bottom of the page.

Jorg Kubisz and his team at Cathay Pacific’s kitchen in Hong Kong produce a staggering 63,000 in-flight meals every day. “We have very big numbers here on a daily basis: 15,000 portions of rice, 800 steaks, 80,000 bread rolls, buns and pastries and five tonnes of fruit, ” Mr Kubisz says.

The kitchen includes 17 different sections to produce most cuisines — western, continental and Mediterranean, Japanese, Korean, Indian and South-East Asian as well as a bakery and halal and kosher kitchens. The kitchens are a hive of quiet and controlled activity as everyone works to tight schedules.

A huge wok sizzles and throws up flames as a chef cooks 60 portions of stir-fry at once — 60 per cent of the food made in Cathay Pacific’s kitchen is Chinese food. A big vat of delicious smelling curry bubbles away as a chef uses a spoon the size of an oar to stir it.

Some tasks are done by hand — lettuce leaves are sorted, omelettes are flipped and pies are egg-washed. Other tasks are done with some help from technology. Two chefs stand at an intriguing contraption — it looks like something out of a Wallace and Gromit animation — which rotates a dozen hot frying pans underneath a nozzle which squirts oil, then an egg mixture that is cooked, flipped and dished up by the chefs. “We have to do this because we cook 8,000 omelettes a day, ” Mr Kubisz explains.

More important than what goes in the food is what does not or should not. With 63,000 meals being churned out a day, the opportunity for something to go wrong is big and the consequences even bigger. “Foreign objects in food are a reality,” Mr Kubisz says. “If a passenger notices, he will complain. Then we have to prepare a report and that number is captured in our performance.” Cleanliness procedures are tight. Regular hand washing is a must and everyone uses hair nets, face masks, white coats and bootees.

Cathay Pacific’s kitchens are impressive enough, but to the west in Dubai, Emirates airline is leading the charge on air travel expansion. Sprawled across one of the world’s foremost international airports is the world’s biggest kitchen, producing about 120,000 meals a day.

“Our biggest challenge is logistics. It’s putting it all together and getting it on to the plane,” head chef James Griffith says. The quantities he and his team handle are huge — 13 million croissants and three million muffins are baked on site every year, 300 tonnes of Australian lamb is cooked and 250 tonnes of watermelon is prepared.

With 1,000 flights taking off and landing in Dubai every day, the smooth running of the kitchens is crucial to keep flights on time. Emirates’ head of catering Duncan Davies says there is little room for error. “To help us handle the tremendous volume coming in at the peak period, one way is to automate and we have various automated systems, ” he says. “We have our team working around the clock, so if there’s a breakdown, immediately they can respond.”

Airline meals have long had a bad reputation as being inedible, flavourless fare. Terri Higgins, from Qantas catering, says times have changed, thanks in part to new technology. “I think airline food’s really changed from the stigma it used to have in the early 60s and 70s, ” she says. “The equipment we have on board nowadays, it’s not just ovens. We have toasters, toasted sandwich makers, espresso machines.”

But there are foods that don’t fly well and airlines have learnt to leave them off the menu. Anything raw, such as sashimi and oysters, is a no-no. So is anything liable to dry up when reheated or at altitude. “For your main courses, the best options are things in sauces — the stroganoff, the stews. Risottos don’t work well — they’ll go mushy or hard goop, ” Mr Griffith explains. Also, dry cabin air and high altitude means passengers lose a third of their sense of taste. It means, Mr Griffiths says, that the food has to be more intensely flavoured. “Tomato sauce works very well.”

Wine is also affected by weakened tastebuds, but there is another factor. Vibrations from the engines alter the wine’s structure. Cathay Pacific’s Charles Grossreider says consequently wines have less flavour when drunk mid-air, so he chooses more complex wines to be served on flights.

It’s costly for the airlines, which may make only $3 profit out of a $300 airfare. Faced with the huge task of feeding 8 million passengers every day, you could argue that it is these kitchens that really rule.