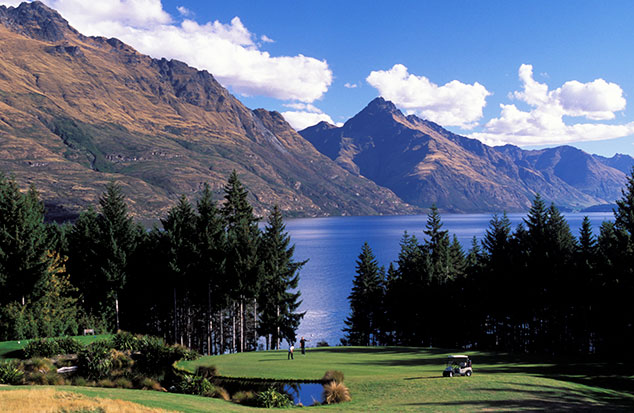 The view at 10,000ft above Queenstown is simply stunning for passengers aboard our Air New Zealand flight. But in the cockpit, The West Australian and Channel 7’s Today Tonight crew see a very different picture. We’re about to land on a tiny runway nestled between treacherous mountains. Heads are down scanning an array of screens that weave computer wizardry as the plane’s navigation system uses global positioning satellites to pinpoint the dangers that have claimed so many lives in the past or forced planes to divert.

Required Navigation Performance (RNP)
Dubbed RNP (required navigation performance) and introduced in the late 1990s, the system allows pilots to fly in blinding cloud, rain and snow around mountains right to the runway and saves costly diversions. And its accuracy? A few metres.

Queenstown is known as one of the world’s most difficult and challenging airports for landing and takeoff. Air New Zealand’s Airbus A320 fleet manager Capt. Hugh Pearce says RNP is complex and needs 25 different navigation systems and backups to work correctly.

A single diversion can cost as much as $30,000, making the value of RNP compelling. But it’s not just safe landings in airports such as Queenstown that are driving airlines’ push for RNP. Because of its high-precision capability, RNP can save airlines millions of dollars in fuel costs by using much shorter – and mostly curved – approaches to airports.

RNP is just one of many new technologies that have dramatically improved airline safety, resulting in the lowest number of accidents since 1945. Last year, there were only 475 deaths from 23 accidents while the industry carried 2.9 billion passengers.

Compared with traditional cockpits, the improvements in computerised cockpits are significant with the elimination of up to 600 dials and gauges. And procedures are cut. If an engine catches fire, a pilot now needs to take four actions instead of 15.

Traffic Collision Avoidance System (TCAS)
Two of the greatest advances in the cockpit are the traffic collision avoidance system and the enhanced ground proximity warning system. TCAS provides pilots with collision protection if there is a failure by air traffic controllers. It tracks all planes by picking up their identity transmission and warns of an impending collision and what action is required. It has saved thousands of lives.

Enhanced Ground Proximity Warning System (EGPWS)
EGPWS shows pilots the world’s terrain database on their computer screens and colour-codes mountains relative to the plane’s altitude. And the gadgetry doesn’t end there. There is a 3-D weather radar that detects turbulence and an auto-land system that has an accuracy of just a metre.

Aircraft testing improves safety
Another critical aspect of keeping passengers safe is testing the planes, an extremely sophisticated and expensive process. When Boeing built the 365-seat 777, it had to prove that the 777 structure could carry the maximum design load in the most extreme conditions over the life of the plane.

Enter the ultimate torture chamber. Applying the torture were 96 hydraulic actuators which punished the 777 in 120,000 simulated flights – double its expected life span. The most dramatic testing was done on the wing. After simulating two lifetimes of testing, engineers bent the wing upwards 7.31m – equal to a load of 120,000kg – before it fractured.

But testing wasn’t always that sophisticated. In 1932 the Douglas Aircraft Company used a steamroller to test the structural integrity of its DC-1 wing.

And there are a host of operational tests. One of the most impressive is the velocity minimum unstuck test which determines the plane’s minimum lift-off speed. The test pilot tries to get the plane to take off at the normal speed, which results in the plane “sitting” on its tail before lifting off. Another torturous test is rejected take-off. The 777 was loaded to its maximum take-off weight and brought up to take-off speed. Without using reverse thrust, with worn brakes the pilot must bring it to a stop using brakes only. After stopping, the brakes became so hot they glowed red. However, no action can be taken for five minutes, representing the time taken to get emergency vehicles to the plane.

Another test is the cold soak, where the plane is left for three days in a blizzard before start-up. And the engines that power these giants of the air have to endure even worse. General Electric’s GE90 – the world’s largest engine that develops 76,000hp – had to soak up 4.5 tonnes of water and 1.5 tonnes of ice a minute, along with an assortment of dead birds. But testing is just one aspect.

Expensive maintenance
Maintaining a plane is extremely expensive. Airbus A380 tyres cost $92,000 each and must be changed about every six months. The A380 has 32 of them. An A380 windscreen-wiper blade will set an airline back $1000 and a complete overhaul every five years lasts two months, takes 40,000 man hours and can cost more than $6 million. The improvements in cockpits are significant with the elimination of up to 600 dials and gauges.