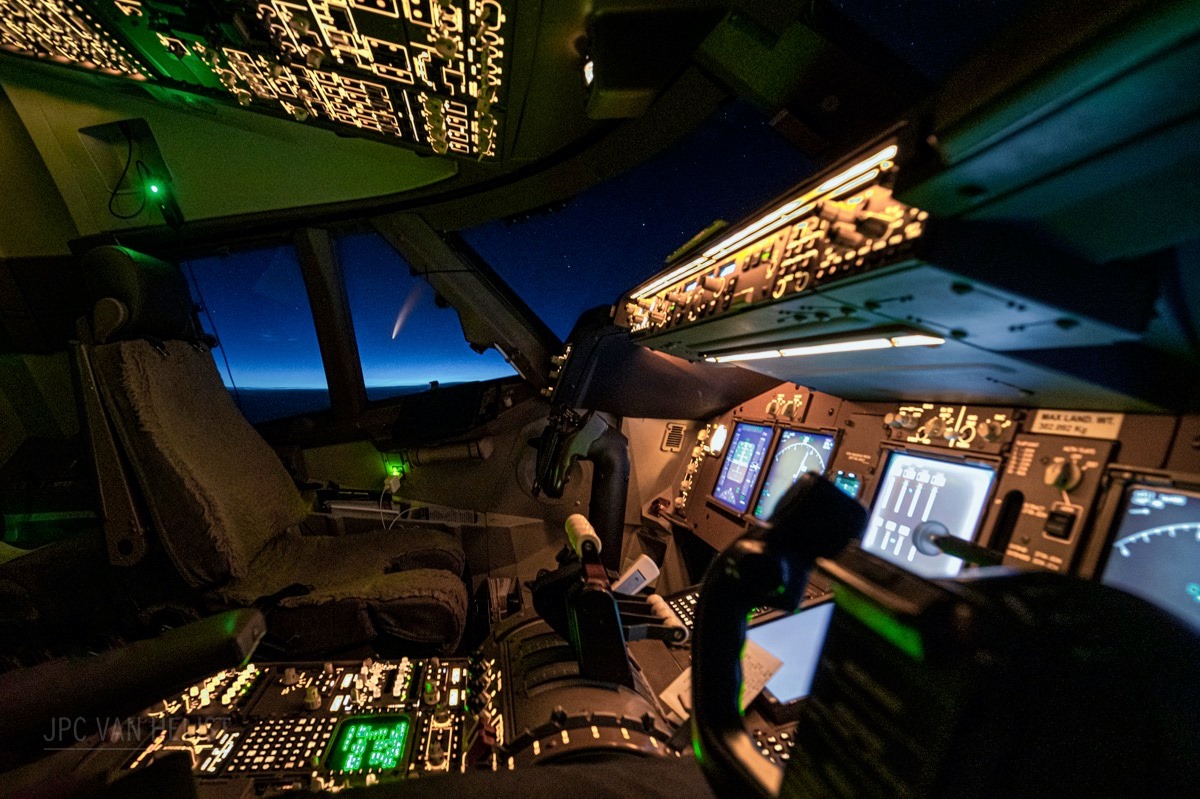 Our 747 pilot contributor Christiaan van Heijst has taken a stunning photo of Neowise from his cockpit.

“A messenger from the stars in my window.

“It’s been a long time ago since I saw a comet with the naked eye. Last time was the Hale-Bopp comet in 1997, overlooking the moonlit rooftops and starry sky from my small bedroom. I was supposed to be asleep already, but halfway the night I got up and decided to revel in the quiet atmosphere of the night. Night-owl since birth.

“Such a fascinating sight to see a deep space object that bright in the heavens, I’m not surprised ancient astronomers were thrilled to notice those strange visitors passing by. According to legend and myths, comets often presents as an omen of bad news and disasters. I guess 2020 qualifies pretty much for that so far, in many facets of life.

“Last night I was lucky to see the Neowise comet that’s at its brightest right now during its 800-year orbit around the sun. Even though it’s even further away from us right now than planet Mars, it’s illuminated gas-tail can hardly be missed.

“Not only was I lucky to witness this giant space-snowball, it proved to be a flight that held many more celestial phenomena.

“The glowing noctilucent clouds on the polar horizon, a spectacular waning crescent moonrise, planets Jupiter, Saturn, Mars and Venus (below). And to top it off, the International Space Station passed as a white dot, reflecting the bright sunlight on her solar panels.

“No matter how solitary and isolated it might feel to fly over the empty Atlantic at night in the present crisis, I never feel lonely. The stars, my dear moon, the planets and even the odd comet visitor.. they are all there and it shows me what a small, humble planet we occupy.

“I feel at home up there, I reside down here. Gazing at the stars and the deep unknown, I’m reminded of the famous quote from The Little Prince, written by the late Antoine de Saint-Exupéry.

“And now here is my secret, a very simple secret: It is only with the heart that one can see rightly; what is essential is invisible to the eye.”