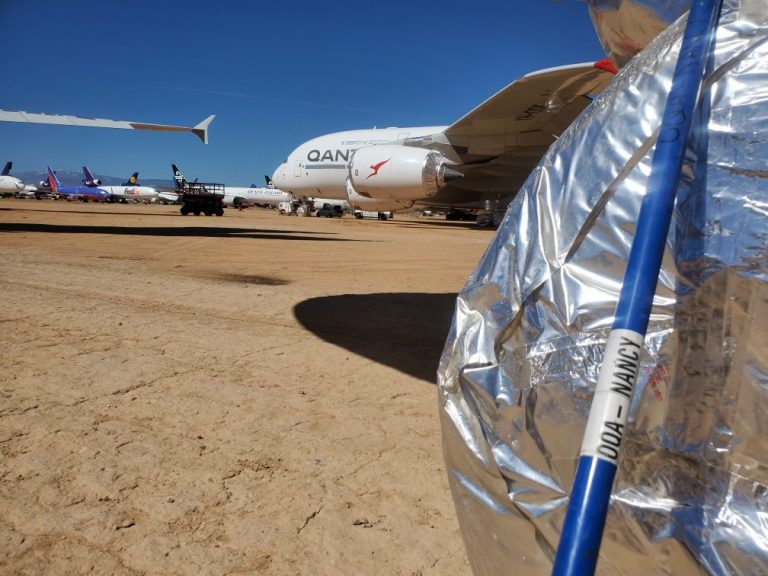 Passengers just love Qantas ’s A380 superjumbos – and so do rattlesnakes and scorpions.

Qantas’s fleet of A380s is now basking in the sun in California’s Mojave desert and its rattlesnake season so Qantas engineers have added a new pre-inspection procedure to avoid the wrath of startled snakes when they carry out weekly maintenance on the parked fleet of superjumbos.

According to the airline’s Roo Tales blog while engineers are well versed in how to protect the aircraft from birds and insects nesting in crevices in the fuselage, in Victorville California, there is a different set of potential hazards the engineers need to be on the lookout for.

While the dry heat and low humidity of the California desert make it the ideal storage facility for aircraft, it is also the ideal environment for the highly venomous Mojave rattlesnakes and scorpions, both of which are prone to setting up camp around the wheel wells and tyres of slumbering aircraft.

Qantas Manager for Engineering in Los Angeles, Tim Heywood, said having a team of engineers driving the two hours from LA to Victorville for regular inspections is a vital part of keeping the aircraft in top condition during their downtime.

“The area is well known for its feisty ‘rattlers’ who love to curl up around the warm rubber tyres and in the aircraft wheels and brakes. Every aircraft has its own designated “wheel whacker” (a repurposed broom handle) as part of the engineering kit, complete with each aircraft’s registration written on it,” Mr Heywood said.

“The first thing we do before we unwrap and start any ground inspections of the landing gear in particular is to walk around the aircraft stomping our feet and tapping the wheels with a wheel whacker to wake up and scare off the snakes. That’s about making sure no harm comes to our engineers or the snakes.”

“Only then do we carefully approach each wheel and unwrap them before performing our pressure checks and visual inspections.

“We’ve encountered a few rattlesnakes and also some scorpions, but the wheel whacker does its job and they scuttle off.”

The engineer’s work involves everything from covering the interior seats with plastic sheeting to applying a protective film to the top of the rudder and on all of the cabin windows.

The wheels, tyres and landing gear legs are wrapped in protective film and all inlets and orifices on the fuselage are plugged to avoid insects, birds and even bats making themselves at home.

While in hibernation, the aircraft require regular monitoring, so engineers carry out weekly, fortnightly and monthly inspections that include draining fuel tanks of water caused by condensation, rotating the wheels to avoid flat spots, check the tyre pressures, and inspect the fuselage and wings for animal nests.