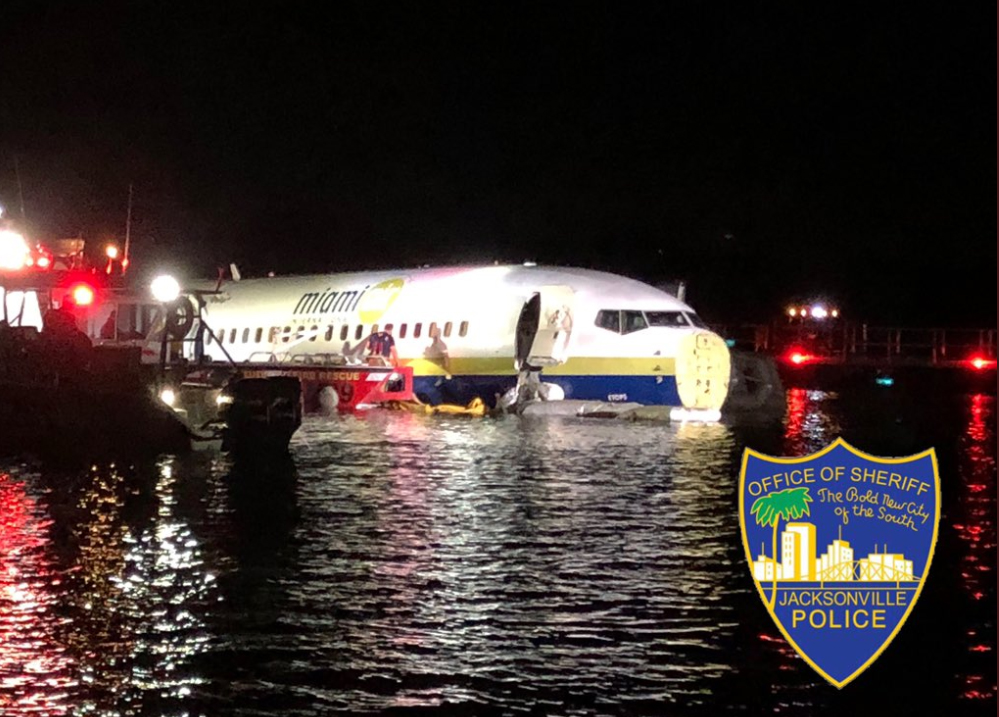 The pilots of a Miami Air International Boeing 737-800 that overshot a runway and plunged into a river asked for a runway change prior to landing and were unable to use thrust reversers, investigators have revealed

The Miami Air 737 on a flight from Guantanamo Bay, Cuba skidded on landing at Jacksonville Naval Air Station in a thunderstorm then plowed about 1000ft over sand and gravel and into the St Johns River.

All 143 passengers and crew survived but there some minor injuries and 21 people were taken to hospital. At least three pets traveling in the cargo hold died.

National Transportation Safety Board vice chairman Bruce Landsberg told a press conference Sunday that the pilots’ original plan was to land to the west on runway 28.

But at some point as they arrived in the area,  they asked air traffic control to change that direction of landing and land to the east on runway 10.

They were told that the US Navy had arresting gear on the runway for planes operating offshore that were unable to land on aircraft carriers.

This displaced the threshold and made the runway’s effective length about 7800ft, Landsberg said.

“In this particular case the airport was configured to land to the west,’’ he said. “The pilots requested to change the active runway. We don’t know what they were thinking or why they made that choice.

“That will be one of the things that we look to find out as we go through the cockpit voice recorder and I would also point out that there are ongoing interviews with the crew at this point so we should get more.”

Preliminary information from the flight data recorder showed the Miami Air 737’s airspeed at touchdown was a 163 knots (187.6mph/302kmh) and the ground speed was 178 knots.

Landsberg said this roughly translated to about a 15-knot tailwind (17.2mph/27.8kmh).

He said flaps were set at 30 degrees and ground spoilers deployed three seconds after touchdown.

“The aircraft had been maintenance and the maintenance log noted that the left had thrust reverser was inoperative and there are procedures to deal with that on the minimum equipment list,’’ he said.

Thrust reversers help slow the plane by redirecting the flow of the engine thrust. Pilots can land without thrust reversers and do not take them into account in landing performance calculations.

Landsberg said the NTSB would be looking thoroughly at the maintenance of the aircraft leading up to the crash and the condition of the thrust reversers “would obviously be of interest”.

He was unable to comment on whether the landing speed was high because the agency had to take into account issues such as the environment and aircraft configuration in that determination.

Although the NTSB has retrieved the flight data recorder, it has still to retrieve the cockpit voice recorder because it remains underwater in the tail of the plane.

Landsberg said the CVR would give investigators more information on what the crew was thinking, their, discussion with air traffic control “and their decision-making process”.

Fule is being removed from the plane ahead of moving it.