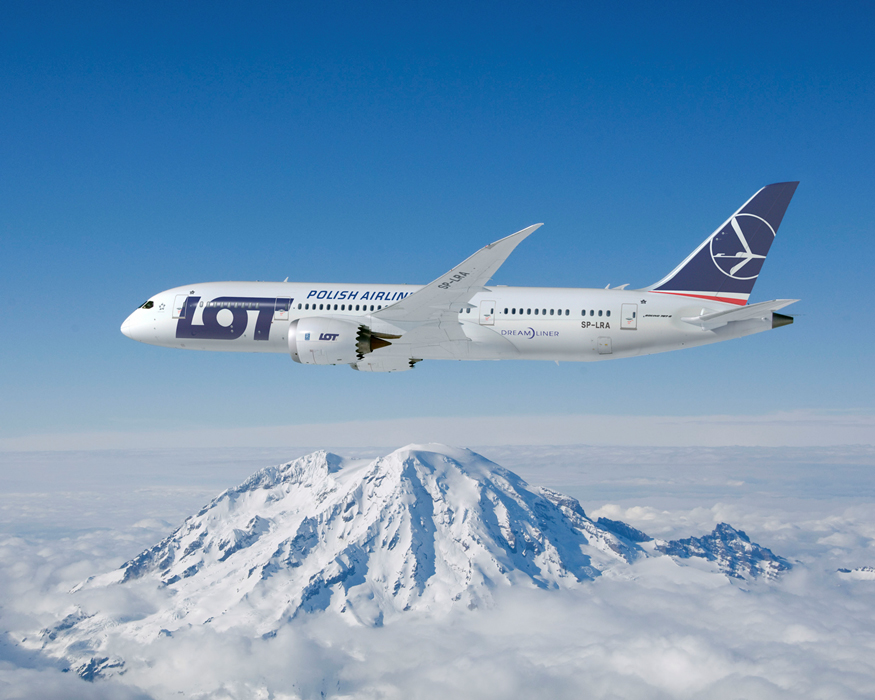 The announcement of the connection to Newark is touted by the  airline as its 23rd route announcement since the beginning of this year and is part of  a growth strategy it has been implamenting since retuning to profit.

The Polish flag carrier will start  three-times weekly service to Seoul on October 17  using Boeing 787-8 and LOT is expected to inaugurate service between its hub at Warsaw’s Chopin airport and Los Angeles in early April 2017.  If confirmed,  this will be the very first direct connection between Central-Eastern Europe and California.

The Warsaw-Newark flights start on April 28 anda will operate on Monday, Thursday, Friday and Sunday. As of June, a Tuesday flight will be added.

The airline will initially deploy a leased Boeing 767-300 configured with a business class and an economy class on the route, before switching to own Boeing 787 operations in August.   It currently has six -8s in its fleet. LOT’s 787s have a three-class configuration, with 18 business class seats with a fully flat bed in a 2-2-2 layout, 18 premium economy seats in a 2-3-2 lay-out and 216 economy seats in a 3-3-3 configuration.

“Newark is one of the most important airports to the Polish diaspora on the east coast of the United States. I am pleased that we are able to relaunch that route after a break lasting several years, ensuring our fellow countrymen the most comfortable flights to Poland,” said LOT chief executive RafaÅ‚ Milczarski.

LOT used to fly to Newark, but cancelled the route in 2012 as part of its comprehensive restructuring plan to bring the company back to probability.

Together with Newark, LOT will continue to operate flights to JFK.  Frequency of its JFK service will increase for the first time to daily this winter season.  The Newark flights will mean LOT will offer passengers two daily flights to the New York metropolitan area on most days next summer.

LOT returned to profit in 2014 following a rigorous restructuring plan involving state aid from the Polish government. The European Commission authorised the subsidies, considering them restructuring aid, but required LOT  to cap its growth as to not distort fair competition. This cap has been lifted and LOT on Sept. 8 announced what it called its “2020 profitable growth strategy”.

Under the four-year business plan, LOT is planning to grow passenger numbers to 10 million per year from 4.3 million in 2015 and gradually increasing its fleet and network.

“Taking maximal advantage of the fact that the market of air services in Poland and the Central and Eastern Europe is bound to grow at a much quicker pace than in other European countries is a starting point for our plan of further growth. We have estimated that in Poland alone the number of passengers is going to grow at about 5% per year. It is a huge opportunity for us,” said Milczarski.

Its network growth will focus on long-haul flights, particularly North America and Asia where it currently has only five routes (Beijing, New York, Chicago, Toronto and Tokyo), and where competition is considerably lower than on short and medium haul.  On short-haul flights LOT faces intense competition of low-cost carriers such as Ryanair and Wizz Air.

“Long-distance flights are the most profitable part of our business and being the only airlines in the region, LOT has the related growth potential. We are mostly going to focus on developing flights to North America and most important business centers in Asia. Connections to Central Asia and to the Middle East are particularly interesting from our perspective,'' the airline's CEO said. "Warsaw’s geographical location allows to develop an unmatched offering of flights to countries such as Kazakhstan or Iran. We are going to take advantage of that potential.”

To support this targeted growth, LOT is planning to boost its fleet to approximately 70 aircraft in 2020, including 16 Boeing 787s and 15 new single-aisle planes with 150-plus seating capacity.

In 2017,  the first few single-aisle aircrafts are going to be added to LOT’s fleet, Milczarski said, adding that the company is in “the final phase of negotiations” for these narrowbodies.