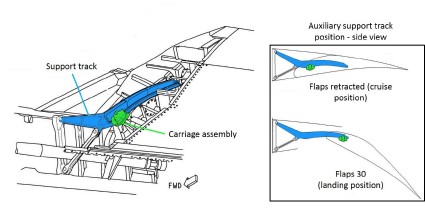 A damaged component on the part of the right outboard wing flap closest to the fuselage of a missing Malaysia Airlines Boeing 777 was a key to the finding by air safety sleuths that the flap was likely stowed in the flight position.

The panels have defined stages of deployment, with “flaps 30’’  often used for landings,  but they are retracted during flight to optimise the wing’s aerodynamics.

A  pilot in a controlled ditching aimed at reducing the amount of debris would have extended the flaps and the finding they were retracted is fatal blow to proponents of that theory who have been criticicising the ATSB's methodology for determining a probable search area.

A key component in the puzzle is a  fibreglass and aluminium housing, known as a “seal pan’’. This is located at the inboard end of the flap and would normally house an auxiliary support track and carriage assembly used to guide the flap as it extends from the wing.

The support track is fully inserted in the flap when the panel is stowed for flight but progressively withdraws as the flap extends.

Although the support track was lost, presumably in the impact, two aluminium components in the seal pan cavity known as stiffeners showed impact damage and their position was such that the stowed support track was the probable culprit.

“The damage was significant because it was indicative of impact damage and the only component in the vicinity of the stiffeners, capable of independent movement within the seal pan, was the support track,’’ iAustralian Transport Safety Bureau investigators said in their report. “Measurements of the support track position at the various stages of flap deployment, indicated that the track would have to be fully inserted into the flap in the retracted position to be adjacent to the damaged stiffeners.’’

Investigators also found an outwards fracture of the fibreglass seal pan which had started at location adjacent to the damaged stiffeners.

“The damage was most likely also caused by impact from the support track,’’ the report said. “ That damage provided further evidence of the support track position within the flap seal pan cavity, indicating that the flaps were retracted at the point of fracture and separation from the wing.’’

And like the steak knives in that advertisement, there was more.

The flap seal pan was also fractured adjacent to the rear spar with comparable damage on the spar and a flaperon, an adjacent moveable panel held by French experts. The investigators saw that the two damaged areas aligned if the flaps were retracted but there was a significant offset if they were extended.

The investigators concluded that the damage to the internal seal pan components was “consistent with contact between the support track and flap, with flap in the retracted position".

“The possibility of the damage originating from a more complex failure sequence, commencing with the flaps extended, was considered much less likely,’’ they said.

“With the flap in the retracted position, alignment of the flap and flaperon rear spar lines, along with the close proximity of the two parts, indicated a probable relationship between two areas of damage around the rear spars of the parts.
“This was consistent with contact between the two parts during the aircraft breakup sequence, indicating that the flaperon was probably aligned with the flap, at or close to the neutral (faired) position.’’

Numerous other areas of flap damage were analysed, with some consistent with the flaps retracted and others not providing any useful information about the panel’s position.

The combined findings  produced the conclusion that the flap was most likely in the retracted position at the time it separated from the wing and the flaperon was probably at, or close to, the neutral position when it separated .