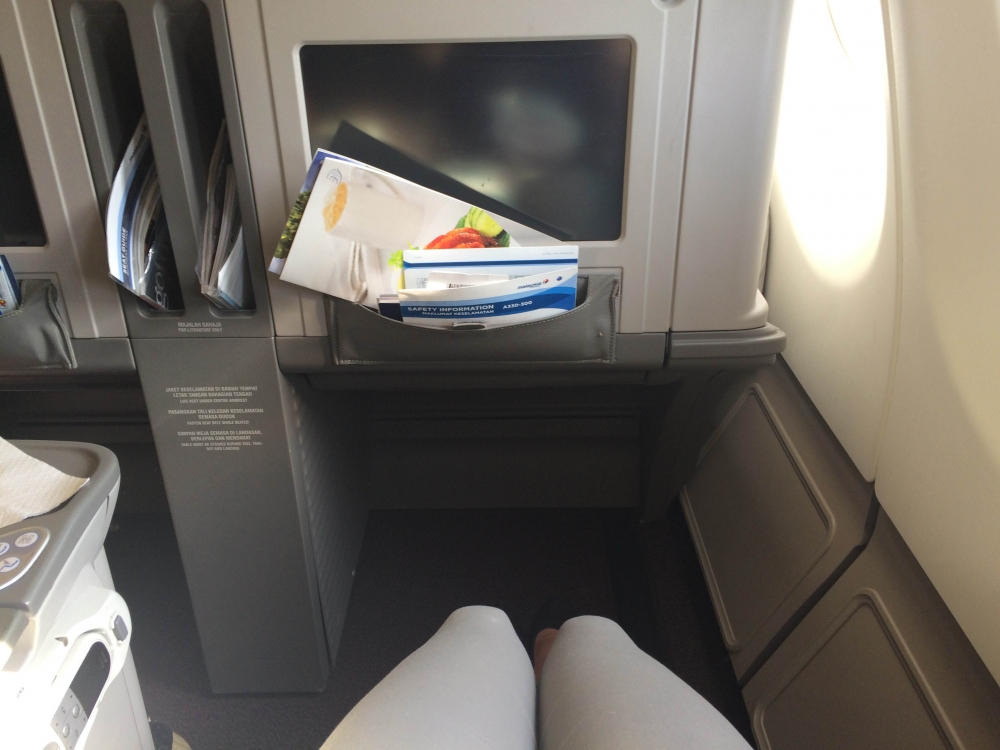 When I first stepped foot on Malaysia airlines flight MH124 to Kuala Lumpur from Perth my heart sank, seeing an almost empty plane broke my heart as

I’m a big advocate for Malaysia Airlines and the contributions they have made to the aviation world.  What has happened this year could have happened to any airline (and indeed has) but why Malaysia Airlines have had the two tragic incidents is a mystery that may forever go unsolved.

Thankfully, the flight home was completely full and after two days at Malaysia Airlines headquarters watching the steps this airline is taking to rebuild it was a great sight to see.

But enough of that, my main priority for being on the flight was to review Malaysia Airlines very popular Business Class and to sample their signature dish, the peanut satay.

In flight entertainment
Malaysia Airlines doesn’t hand out the noise cancelling headsets until after takeoff and they collect them again 30 minutes before landing so when you’re offered a paper before takeoff I suggest you take it because a good hour of the flight will be spent with no in flight entertainment.

The actual screen is large and clear however when the lights are on and the sun is out it was a little difficult to see on the window seat. There is an excellent choice of movies and TV shows available and being that Australia is one of Malaysia Airlines most important markets – our tastes were definitely catered for.

Food and Beverage service
Business Class passengers are offered the standard pre departure welcome drink upon boarding and not long after takeoff another drink is offered from the full beverage selection available as well as a hot towel.

The menu featuring three main meal options had something for everyone but I noticed on the flight from KL that a lot of passengers had taken advantage of the Malaysia Airlines Chef On Call service. Business Class passenger can go online 24 hours before their flight and pre select their meal/s from some 20 selections rather than the three offered on board.

Whilst I enjoyed the menu onboard the flight, upon having a look at the online menu for Chef On Call I would definitely recommend this service as the meals being served looked and smelt even better than that offered from the onboard menu.

One thing I noticed about Malaysia Airline’s main courses versus other airlines was the serving size. They were amongst the most generous I had experienced and of a high quality too -no padding out with onion here.

The actual service delivery was exemplary and I was impressed considering the short flight time. To have a full Business Class cabin served and cleared within 90 minutes on both flights demonstrates the efficiency and skill of the staff onboard. The cabin crew on both flights were nothing short of excellent.

Prior to the meal, another hot towel is given and then the tables were lain with white linen cloths and meals served on china with stainless steel cutlery, china mugs for tea and linen napkins. The appetizer for the flight to KL was of course the signature satay sticks served with peanut sauce and they were every bit as good as I had anticipated.

Soft meat, chunky peanut sauce and a little cucumber to add to the mix as well as the option to have seconds and thirds if you wished! The picture really sells this signature dish much better than any words ever could and next week I will share with you exactly what goes in to making these satay sticks – all 26000 of them a day!

Seat and amenities
The Business Class seat on the A330 was quite hard and at best reclined to an angled flat bed of approximately 160 degrees which I just slipped down. There were plenty of other recline options available to get comfy but lying flat was not one of them. This seat however needs to be put into perspective – I was only on a short flight, long haul flights feature completely flat lie flat beds with a mattress and duvet.

The blankets on the flight were my biggest disappointment – they were what would I would expect in economy and with no spares available on the flight home I froze (admittedly I feel the cold more than most).

Pillows were of a decent size and eyeshades and earplugs are available upon request – there is no amenity kit offered as such on these flights however on the flights over 7 hours there is an amenity kit on every seat. In the Business Class bathroom, toothbrush and toothpaste packs were available as well as aftershave, shavers, moisturiser lotion and mouthwash.

Final Word
Overall my Business Class experience was excellent and with important fundamentals such as service and food ticking all the boxes there’s not a lot to complain about.

I would love to see those blankets upgraded and gate to gate in flight entertainment offered but other than that it’s a competitively priced, high class business product and one that I would highly recommend.