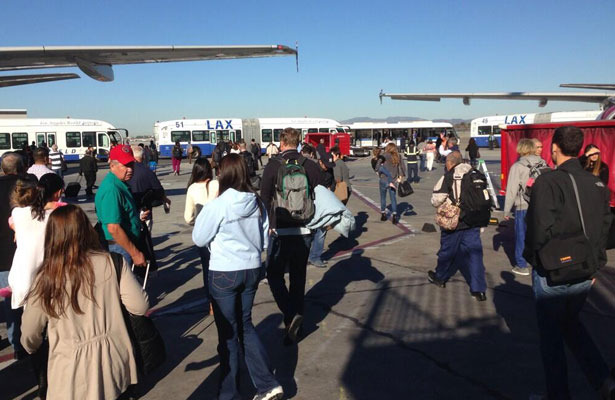 A rogue gunman identified as 23-year old Paul Ciancia has left one man dead and six injured in a crazed attack at Los Angeles airport.

Utter chaos resulted from the shooting rampage at Terminal 3 at the airport.

The US FAA suspended all flights and only arriving flights are being allowed.

The TSA employees’ union has confirmed that a TSA agent died in the shooting. In a statement the TSA said that multiple agents were shot.

Police said that the gunman has been taken into custody.

According to LAX police chief Patrick Gannon The gunman came into T3, pulled out an assault rifle from a bag and began to open firing ..

“He then proceeded into the screening area and continued shooting,” said Gannon.

According to CNN.com US media report that the alleged gunman approached potential victims asking if they worked for the TSA, and spared them if they said no.

Apparently he then doubled back into the main terminal area, as travellers scrambled to get out and reached a Burger King restaurant before police “engaged him in gunfire .. and were able to successfully take him into custody.”

Little is known about the suspect said CNN.

Mr Ciancia’s family in New Jersey told police on Friday they had received a text message from him saying he planned suicide, report US media.

“Their younger child got a text message from Paul [Ciancia] stating that there were some comments in there about his wellbeing and he wanted to possibly take his own life,” a New Jersey police chief, Allen Cummings, told ABC News.

California congresswoman Loretta Sanchez told CNN that it is “likely” the suspect had been aiming at TSA officers.

The Los Angeles Times newspaper cited sources saying the shooter, who opened fire shortly after 9am local time in the crowded terminal was also believed to be a TSA employee at the airport, which is the country’s third-biggest hub.

Gannon would not comment on that report, but said: “We believe at this point that there was a lone shooter,” and that he “was the only person who was armed in this incident.”

Passengers on flights NZ2 and NZ6 from Auckland have arrived in Los Angeles and processed through customs.

NZ2 now continues through to London and check-in is underway for passengers joining this service in Los Angeles.  The flight has been re-timed to a 1900 local time departure (a delay of two hours) to allow passengers to get to the airport through the congestion surrounding the airport.

Hundreds of flights across the US were affected by the incident.

Airport officials said 746 flights nationwide had been affected and 46 were diverted.