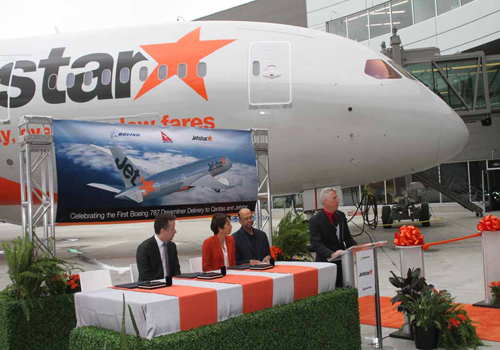 Boeing, Qantas and Jetstar Airways have celebrated the delivery of the group’s first 787 today, which is also the first Dreamliner for Australia.

“Today is a historic milestone for the Qantas Group and Jetstar as we welcome the most advanced passenger aircraft ever constructed to the fleet,” said Qantas Group CEO Alan Joyce.

“In just 10 short years, Jetstar has grown to be the largest low fares carrier in the Asia Pacific, carrying more than 100 million passengers. The 787 will set up the airline for another decade of growth.”

“The 787s unmatched fuel efficiency will give Jetstar an advantage in the marketplace and its passengers will travel with the world’s most advanced in-flight experience.”

“Jetstar customers will have the chance to fly in a larger and more spacious cabin, enjoy gate to gate in-flight entertainment and arrive at their destination more refreshed thanks to a lower cabin altitude to reduce the impact of jet lag,” said Jetstar Group CEO Jayne Hrdlicka. “The entire Jetstar team is very excited to have the 787 take to Australia skies.”

The airline group has a total of 14 787s on order plus 50 options which it expects to take.

The Jetstar 787, Flt JQ7878 flew from Paine Field in Everett to Honolulu, Hawaii on Monday US time and will overnight before flying to Melbourne on Tuesday.

The flight to Honolulu was extremely smooth despite some heavy weather around Seattle. The most noticeable difference apart from the spaciousness of the cabin was the quietness of the engines.

Boeing has produced a video of the 787 being assembled which you can see below.