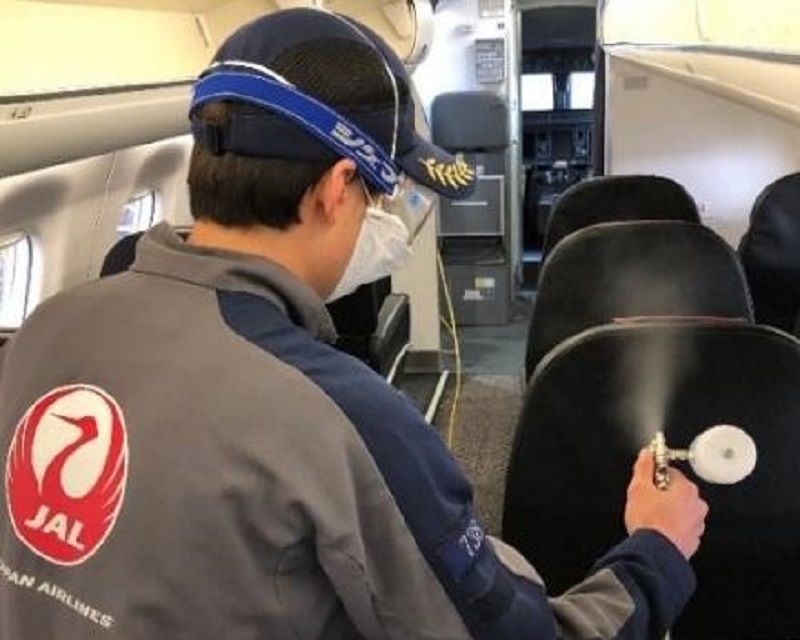 The program, which begins this month and is expected to be completed by July, is certified by SIAA, an organization set up by manufacturers of antibacterial and antifungal agents.

The SIAA mark is displayed on products whose quality is controlled and which meets the ISO22196 standard.

This requires that the proportion of bacteria on the surface of the product must be 1/100 or less of that on the surface of a non-treated product, and the antimicrobial effect must remain after durability tests.

The latest move is part of a suite of measures adopted by JAL and the airline says the coating will effectively inactivate most viruses within the cabin.

Locations to be treated include the lavatory, seats, armrests, overhead bins, interior walls and various locations that customers may come in contact with during a flight.

“The coating agent has been proven to reduce viral levels in a safe manner, as certified by the SIAA,’’ JAL said.

“Aircraft that have been applied with the coating will display the SIAA certification near the entrance of the aircraft.”

Japan Air Commuter and Hokkaido Air System will also get the treatment by the end of the year.

The move comes after JAL in November 2020 began applying the antiviral and antibacterial coating at domestic airport check-in counters, automated baggage check-in machines, check-in kiosks, boarding gate counters, and on airstairs and will gradually expand the program at airports nationwide.

Antiviral and antibacterial coatings have also been applied to airport security areas, wheelchairs, and baby strollers.

The airline has also since March 15 been offering an optional COVID-19 fee-based testing service that has seen more than 17,000 applications for pre-flight tests.