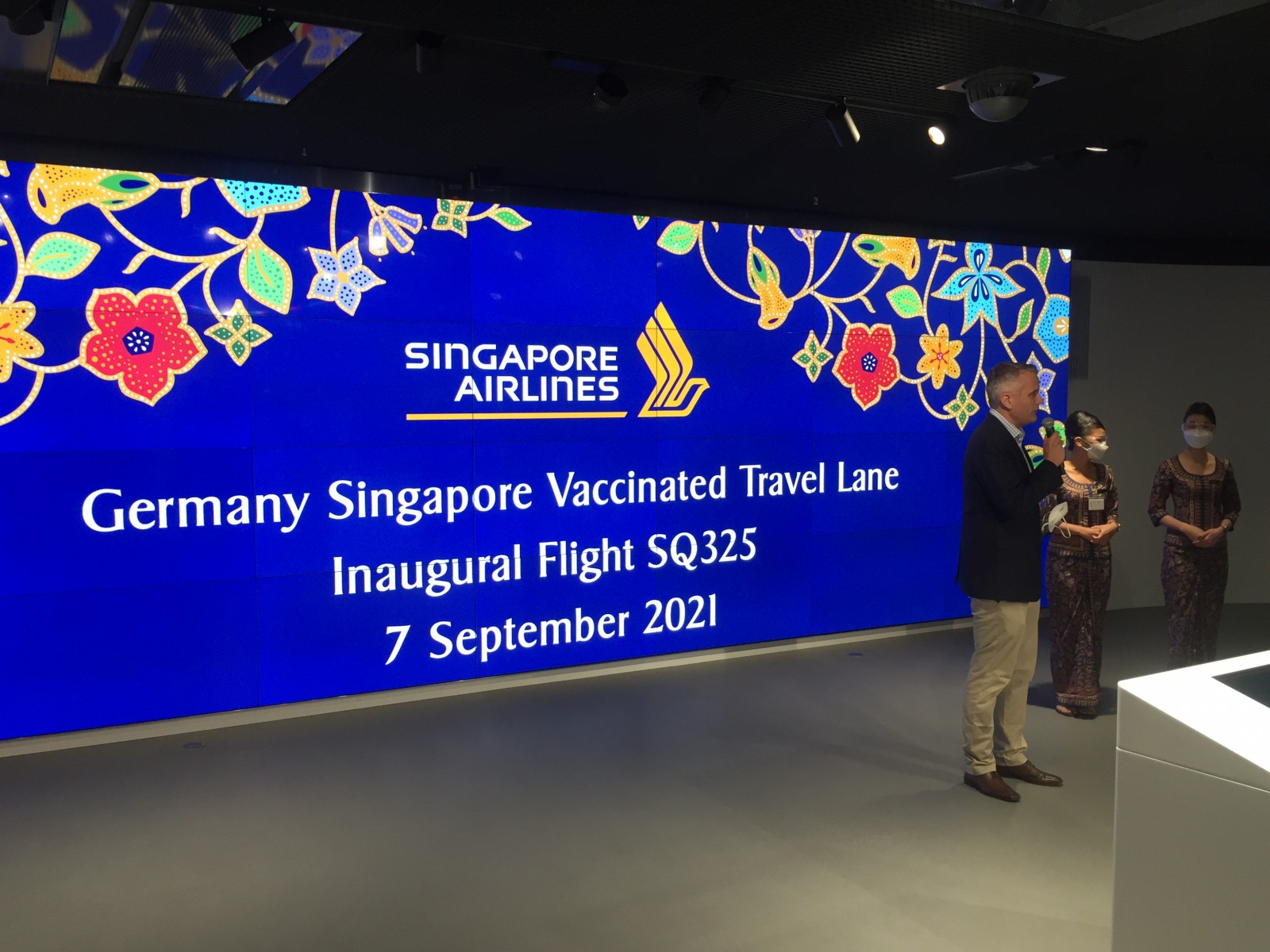 Singapore, like Australia, has been one of the strictest nations with pandemic restrictions with the six million people of the lion city largely unable to leave their island nation since March 2020 at all.

This has taken a heavy toll on their way of living and their normally thriving global aviation and trading hub – after serving 68 million passengers in 2019 and only 12 million last year.

“We will just have a little over two million passengers in all of 2021 as we just see three percent of normal flights,” Lim Ching Kiat, MD Air Hub Development at Changi Airport, told Airlineratings in a rare personal meeting last week in Singapore.

The occasion was very special for Singapore: The city-state opened up on September 8 for just one country worldwide for the time being to come to visit again – Germany.

The author being German jumped at the opportunity to join the inaugural flight of the new Vaccinated Travel Lane (VTL) on Singapore Airlines (SIA) from Frankfurt to Singapore.

“It is is a major milestone for us to establish this new link with Germany,” said Keith Tan, CEO of the Singapore Tourism Board. “Germany is a trusted and safe country. We are very happy how the German government has responded to Covid” – unlike, of course, what many Germans think. For Singapore, it’s clear that this should only be the beginning.

“Probably by the end of the year we will see a few more countries we can link via a VTL,” announced Keith Tan. Asked if Australia could be among them, Tan replied: “The Australian High Commission here has been in talks to establish such a corridor, but with many new cases now in Australia we have to be careful.”

Very high on the wish list for Singapore is China, “we regard Chinese to be as safe as our own locals,” asserted Tan. Problem is, currently Chinese have to quarantine for 21-28 days on returning home. Singaporeans themselves when traveling in rare cases are facing an equally lengthy quarantine afterward in their homeland.

So what is it like to travel on a VTL flight? These are designated flights just for passengers traveling under the new scheme entering Singapore, while other SIA flights from Frankfurt and Munich can just be used to transfer in Changi to onward flights.

In short: It’s a lot of bureaucracy you have to go through and steep extra cost to pay for at least three if not four (depending on the length of stay) PCR tests. Also, you have to be sufficiently digital-savvy to handle the required local Tracing Together app which is paramount to download and actively use already before you can even board your flight to Singapore. This definitely doesn’t make sense for leisure travelers, especially elderly people, while it might be very much welcomed by business travelers to be able to restart their face-to-face contact with customers and colleagues overseas.

But there are several elements creating hassles and contradictions, so even usually savvy professional travelers will be brought to the limits of their wisdom at some point in the process.

This is something also Keith Tan acknowledges: “We know that right now, processes are complicated and we have to simplify them.” And he told the German media group: “You are our guinea pigs.” Some of the rules in Singapore for the German visitors simply don’t make sense and can’t be policed – like the requirement to stay in Germany for 21 days before the departure to Asia.

With European internal borders open again for free movement, there is no way to prove anyone might have violated this rule. It helps to always be aware of the fact that this is an all-new scheme for Singapore as well. There are local voices who are not happy that Germans are allowed to enter while locals basically can’t travel, as Singapore’s own attempts of creating travel bubbles most notably with Hong Kong have been repeatedly derailed.

With Covid cases rising in Singapore recently, this likely won’t happen in the short term. So local media were advised to stay away from Changi airport as the authorities didn’t want any headlines. Ironically, the local Straits Times newspaper contacted the author inflight via WhatsApp and asked for photos and a few quotes that were happily provided, resulting in a widely-read article published online as the aircraft from Frankfurt touched down in Changi.

Travelers need to be aware that they are under the microscope while in Singapore. Indoor and outdoor CCTV surveillance is the norm and even the slightest appearance of deviation from the rules can result in sanctions.

Expect late-night calls during the hours of hotel quarantine after arrival, until the negative PCR test result from the airport, is released, to check on you bunkering up in your room as is mandatory.

If anyone violates a rule, he or she is threatened with immediate expulsion at their own cost, and authorities leave no doubt they will execute this if they see fit. Adhering to all procedures and rules, which are a science of its own, results in relative freedom that no arriving foreigner has enjoyed in Singapore since the outbreak of the pandemic.

As long as have your Trace Together app ready to check in and check out absolutely anywhere you go and do the required PCR tests while in Singapore, which is impossible to forget as authorities are making sure with multiple messages.

Overall, traveling under the scheme gives business people a welcome opportunity to personally engage again in Singapore, resulting in a steep increase of Business Class fares recently on the VTL flights from Germany and a well-booked premium cabin even on the inaugural flight.

At the same time, holidaymakers won’t be much enticed to go through all the required hoops. For the airline and tourism industry, this scheme provides a glimmer of hope in any case. If requirements and procedures get fine-tuned and streamlined soon, by the time Australians might be able to make use of them to return to Singapore again, it might become a winning concept.