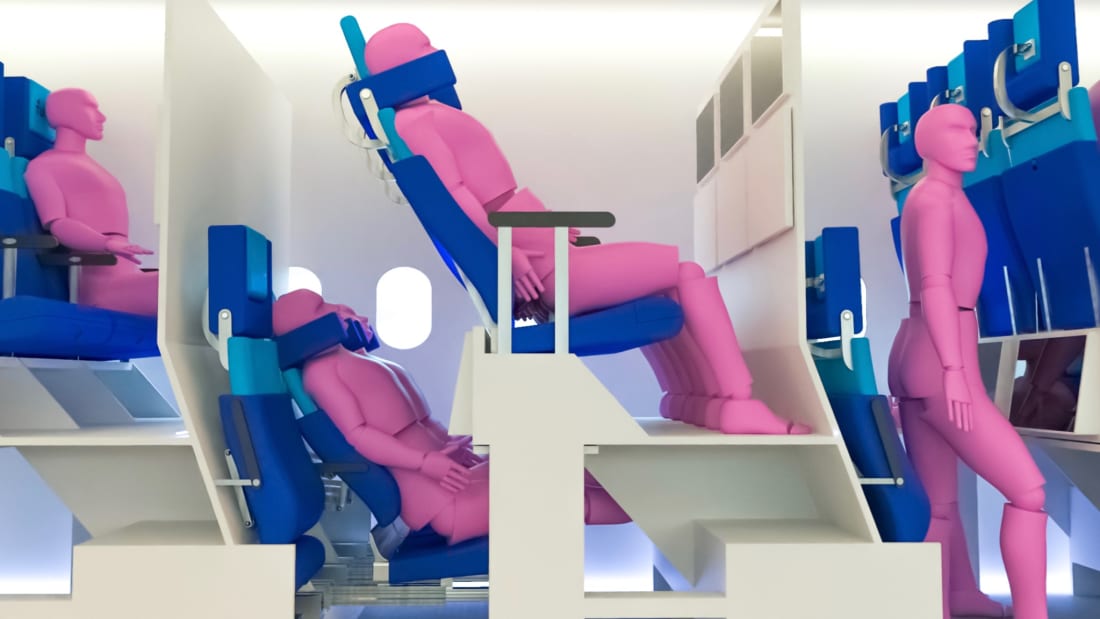 Incredible new aircraft seat concepts – luxury or bizarre? That is the question for passengers to judge from the finalists of the Crystal Cabin Awards, known for spotlighting the newest trends in aircraft interiors.
CNN reports that after the pandemic delayed the announcement of the 2020 award winners, this year the Crystal Cabin Awards has shrunk down its usual eight categories to two key awards that recognize where aviation is right now: the Judges’ Choice category and Clean and Safe Air Travel award.
From stretching out your legs on the bottom section of a multi-level economy seat cabin to curling up in a compartment built into the overhead locker, the nominees offer a glimpse into the potential future of flying says CNN Travel.
It says “one of the most intriguing seat concepts on the Judges’ Choice shortlist is the Chaise Longue Economy Seat Project, which envisages a dual-level seat cabin, with each row alternating between on-floor seating, and seats elevated a few meters above the ground.”

“The seat concepts design is credited to 21-year-old student Alejandro Núñez Vicente who hails from Spain but studies at TU Delft University in the Netherlands. Núñez Vicente told CNN Travel that his experiences traveling across Europe in economy partly inspired the idea.
“Fed up with a lack of legroom, he realized elevating the seat row in front would solve the issue. His design eradicates the overhead luggage compartment, allowing for more space in the cabin for higher-level seats. Instead, luggage is stored in compartments under the seat.”
“The lower row has the advantage of passengers having the lounge experience of a couch by stretching the legs, whilst the upper row provides an SUV experience, making it possible for instance to cross the legs due to the increased legroom and overall living space,” Núñez Vicente told CNN Travel.
Also on the Judges’ Choice shortlist says CNN Travel is Toyota Boshoku’s CLOUD CAPSULE concept, which imagines the area above the economy seat as an additional space for passengers to retreat to once the airplane reaches cruising altitude.

According to a statement from the Japanese company, the design should “make economy class travel safer, more enjoyable and more comfortable while creating more revenue opportunities for the airlines.”
According to CNN travel “the idea is passengers could buy a regular economy seat ticket, and then, as an add-on, purchase access to CLOUD CAPSULE, which Toyota Boshoku calls “a multi-purpose room that matches the experience of a business class seat.”