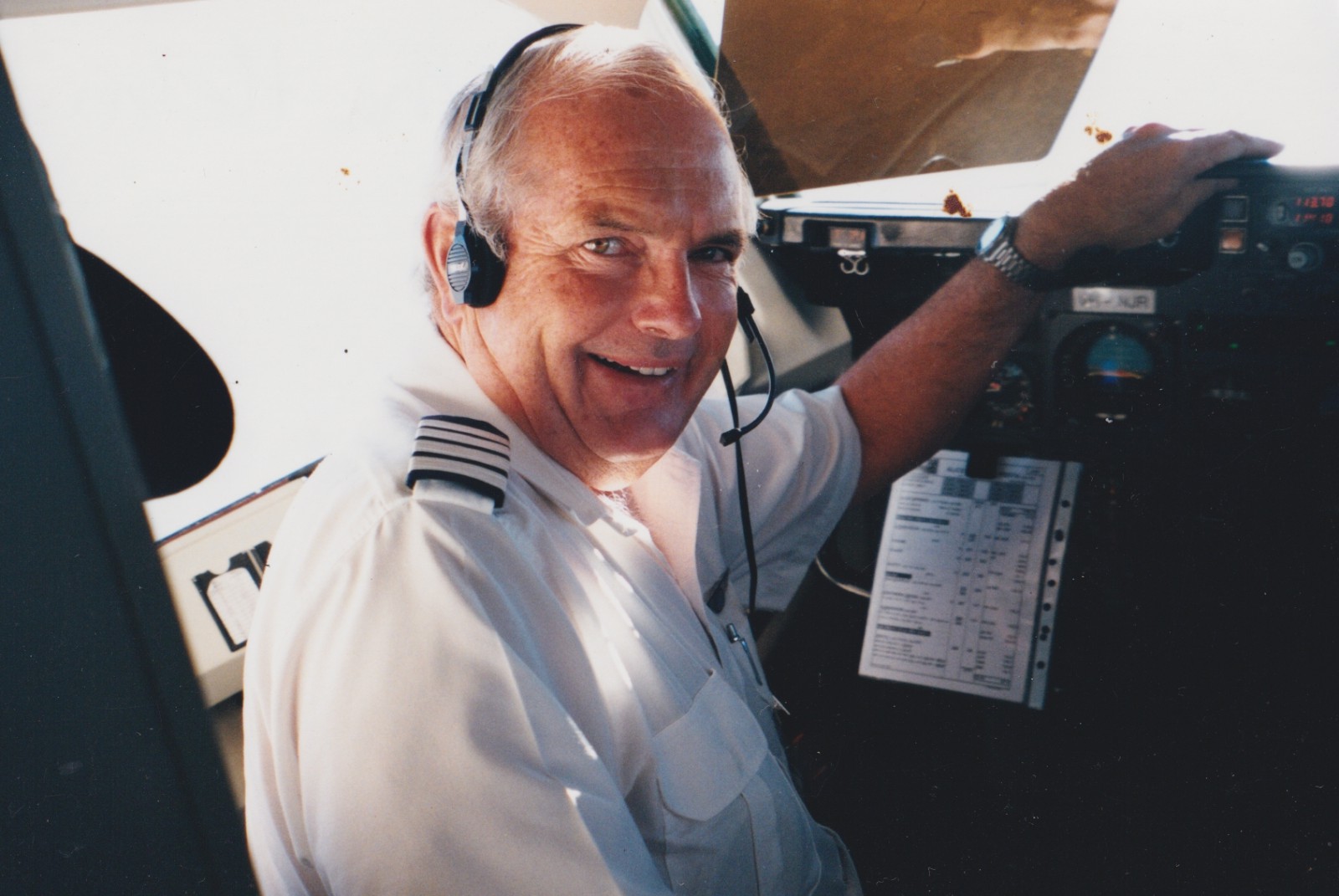 Captain Harry O’Neil (79), who passed away on April 20, is celebrated as one of Australia’s foremost and most respected aviation pioneers.

Harry was a captain of captains, known to friends and colleagues for his commanding presence, engaging personality, boundless generosity and his trademark cheeky grin.

He would go on to make an enormous contribution to the aviation industry over a 51-year career during which he trained and mentored generations of airline pilots in both Australia and overseas and carried tens of thousands of passengers safely to their widespread destinations.

A glimpse of a grey-haired and distinguished Harry in the cockpit would enable the most nervous of passengers to enjoy the wonders of flight.

Harry died peacefully on April 20 and is survived by his wife of 52 years, Pat, and two sons, Brodie and Blake.

Harry was a Wheatbelt boy, born on January 19, 1943, in Wongan Hills, and spent his early life in Ballidu and Wialki before later attending boarding school in Goomalling.

In 1952, the family moved to Glen Forrest and then to Midland in 1954. Harry and his brothers, John and Philip, were foundation pupils at De La Salle College in Midland, with

Harry demonstrated early leadership qualities and was a prefect for the three years he was there.

Harry finished his education at Christian Brothers’ College in St Georges Terrace, now Trinity College. He participated in school cadets and then the Air Training Corps and was a champion rifle-shooter. In 1960, his team won the National Cadet rifle-shooting competition in Queensland.

Harry was also a champion football player and later an accomplished swimmer with two Rottnest Island swims under his belt, but his flying pursuits were always his greatest
passion.

During his formative years, Harry always had aircraft front of mind, building model aeroplanes and looking skyward when one flew over.

Tragedy struck when Harry’s father died suddenly in 1960. Harry, who was 17 at the time, had to assume the role of father figure to the household, helping his mother bring up his six siblings (four brothers and two sisters).

Harry left school to join the public service and worked for the Water Board as a draftsman. Harry’s magnificent handwriting adorns his various flying logbooks.

In 1964, Harry won a Royal Aero Club of WA flying scholarship, which paid for training up to restricted pilot licence standard. He saved every spare cent for either his flying lessons or to support his mum and the family. He eventually achieved his commercial pilot’s licence and, in 1967 with 200 flying hours, started flying at Dampier and then Karratha.

Later in 1967, he moved to Port Hedland to become the base manager for Murchison Air Charter supporting the Mt Newman rail project. It was in Port Hedland that Harry met his future wife, Pat, who was the first receptionist at the Walkabout Hotel.

Harry was one of the great flying pioneers of the newly opening Pilbara. He flew all manner of people and supplies to many of the mining construction camps. Some of his more notable passengers included Lang Hancock, Sir Charles Court and Bob Hawke. In 1969, he returned to Perth and flew locally for Transwest Airlines.

Harry married Pat in April 1970 and had two boys, Brodie and Blake. They built a house in Gooseberry Hill but almost immediately moved to Karratha to further Harry’s career.

When East-West was bought out by Ansett, Harry qualified on the British Aerospace BAe 146 four-engine jet, which was very popular at the time.

After the pilots’ dispute of 1989, Harry went to Europe to fly Fokker F28s with Delta Air Transport, an airline in Belgium. He developed a keen taste for “black beer” in Belgium and he loved a Belgian dark ale with friends. Later, he brewed his own black beer in Perth. This was a difficult time for the family as Pat and his sons stayed in Perth. They were in Years 10 and 12 and couldn’t change schools.

In 1992, Harry returned to Australia when he was employed by National Jet Systems in Rockhampton on the BAe 146.

By this stage of his career, Harry was a very experienced and senior pilot and was a very popular captain and mentor with all the crews. Harry of management for his professionalism and dedication.

Pat moved to Rockhampton to join Harry until 1994, when NJS opened the Perth base and Harry returned to his home State, WA. Harry was appointed the senior base pilot, a position that he held until the Qantas BAe 146 operation closed in 2005.

In 1999, Harry and Pat did a short stint in Ireland, flying with one of National Jet’s sister companies in Europe, CityJet. Harry was immediately drafted into the training role and trained many Irish pilots on the BAe 146.

Harry retired from airline flying in August 2005 but continued flying the aeroplane of his brother-in-law, Graham Shields, on flights around WA until finally hanging up his flying boots in 2015.

Apart from flying, Harry was a keen traveller with Pat, making trips to Europe and the US. He was very well-read on many subjects outside of flying. Harry and Pat were avid four-wheel-drive camping enthusiasts and made many trips, including across Australia.

He had a keen sense of history, particularly of his and Pat’s beloved Wheatbelt area and the Pilbara, and would espouse facts and figures whenever the opportunity arose. They loved staying in the old country pubs. Harry continued to love a black beer with close friends and his signature sign-off, “cheers and black beers”, brought a smile to many.

Farewell to a country boy, an outstanding gentleman, an industry legend and a pilot’s pilot.