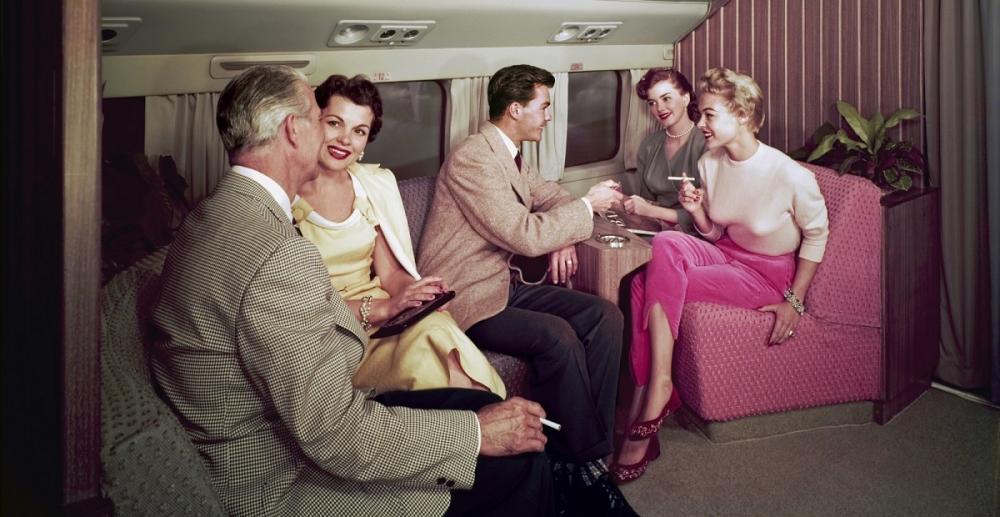 Remember when everyone dressed for the occasion and flying was glamorous?

And the occasion – flying – was very special and extremely expensive with a return trip from London to Australia costing a whopping 55 weeks average weekly earnings.

It was the province of the super-rich, glamorous movie stars, top business executives and of course politicians who never had to worry about paying!

So the passengers for a flight look more like models on a catwalk as you had no idea who you would run into – Charlton Heston, Marilyn Monroe, Audrey Hepburn, Gregory Peck or John Wayne to name just a few.

Pearls, hats, fur coats and corsages were the order of the day for ladies while expensive Italian suits were standard attire for men.

See the way we used to entertain ourselves in flight.

And the mode of transport was typically the great Douglas piston engine airliners of the day. Up until the early 1960s more people traveled on Douglas commercial aircraft than all other types combined such was the popularity of its aircraft designs. However, Boeing had its superb double deck Stratocruiser and Lockheed its sleek Constellation with the triple tail that kept competition keen.

And there were no aerobridges you walked out on the red carpet and up the stairs into your luxurious cabin where there was no such thing as cramped seating.

Even in the new tourist class (economy class), introduced in the early 1950s, there was loads of legroom.

But the downside was that the planes of the era were extremely noisy and vibrated thanks to the reciprocating piston engines.

And the planes flew at about 25,000ft, often in bad weather, so the ride more often than not was very bumpy. Air sickness was a common problem despite what the publicity videos touted.

The airline used DC-4s in a five-across arrangement, adding 19 seats to increase capacity to 63. The cabin crew was reduced to one and only soft drinks were served, while boxed dinners could be purchased before departure.

The fare was $75 one-way compared to the normal $133 and within five months of the introduction of the service, passenger numbers had trebled.

These services were extended to most South American destinations, with governments keen to make travel more affordable. By 1951, tourist class flights accounted for 20% of air travel on those routes.

But on routes to Europe, Trippe needed to get the approval of the airline cartel, the International Air Transport Association (IATA), plus a host of governments that controlled the major European airlines. This proved to be a marathon effort that took four years.

However on 1 May 1952, a DC-6B “Clipper Liberty Bell” operated the first tourist class flights between New York and London. The one-way fare had been set at $270 compared to $395 for first class. The lower fare was achieved by upping the seating from 52 to 82 and the tourist section was five across rather than four. But tourist class passengers still retained the generous 40-inch (101cm) seat pitch, compared to today’s standard of 32-inches (81.28cm).

Tourist class was an instant hit. Traffic doubled within a year and the service was extended to Paris, Rome, Brussels, Frankfurt, Amsterdam, and Glasgow. By 1954, tourist class was available on all Pan Am routes and most routes around the world.

The effect of the fares was stunning, with traffic increasing by 37% in 1955 on the North Atlantic. In that year, (system-wide) 62% of passengers were traveling on tourist tickets.

AirlineRatings.com has acquired a special collection of color images of the era and some of these have been restored by experts such as Christian Bryan of Oregon in the United States.

In some cases, many hours of work was required to bring the faded and distorted colors back to their former glory.