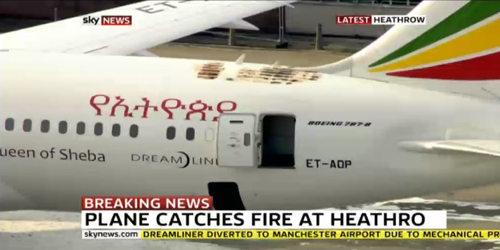 Investigators from the United Kingdom’s Air Accidents Investigation Branch have ruled out the 787’s battery as the source of the fire that damaged an Ethiopian 787 at Heathrow Airport on Friday.

Attention is now focused on the plane’s galley and questions are being raised as to whether a galley oven or coffee machine was left on or if cleaners and maintenance staff may have left a smoldering cigarette on board.

The 787, while powered down, was plugged into a ground power unit but it is unclear if the power was switched on.

Paul Hayes, director of air safety at Ascend, a British aviation consulting firm told the Wall Street Journal that one plane is lost on the ground to an electrical fire every five years.

Mr. Hayes said that several incidents were suspected to have started after a cleaner or ground worker furtively smoked on a parked plane and then failed to fully extinguish the cigarette.

In a statement Boeing said: “We’re aware of the 787 event at Heathrow Airport and have Boeing personnel there. We’re working to fully understand and address this.”

The 787 is crammed with innovations including more electric systems rather than the traditional pneumatic systems that do not rely on bleed air from the engines.

The 787 has in all six electrical power generators and these provide power to the plane’s electrical systems in flight, including the flight deck displays, flight controls and in-flight entertainment. The system is more efficient because it reduces the drag on the engines.

However, New York based Bernstein Research, one of the industry’s foremost analysts, says that the fire damage appears to be near the vertical stabilizer, on the left side of the top of the 787 and as such should have very little connection to electrical systems.

While it is unclear what the cause of the fire is Bernstein says that it believes that there is no connection between the fire and the battery issues of the past.

“Because it appears that the 787 fire is not related to the battery, we believe it is likely that this is a one-off problem that certainly must be addressed, but does not pose a risk to the overall program,” said Bernstein.