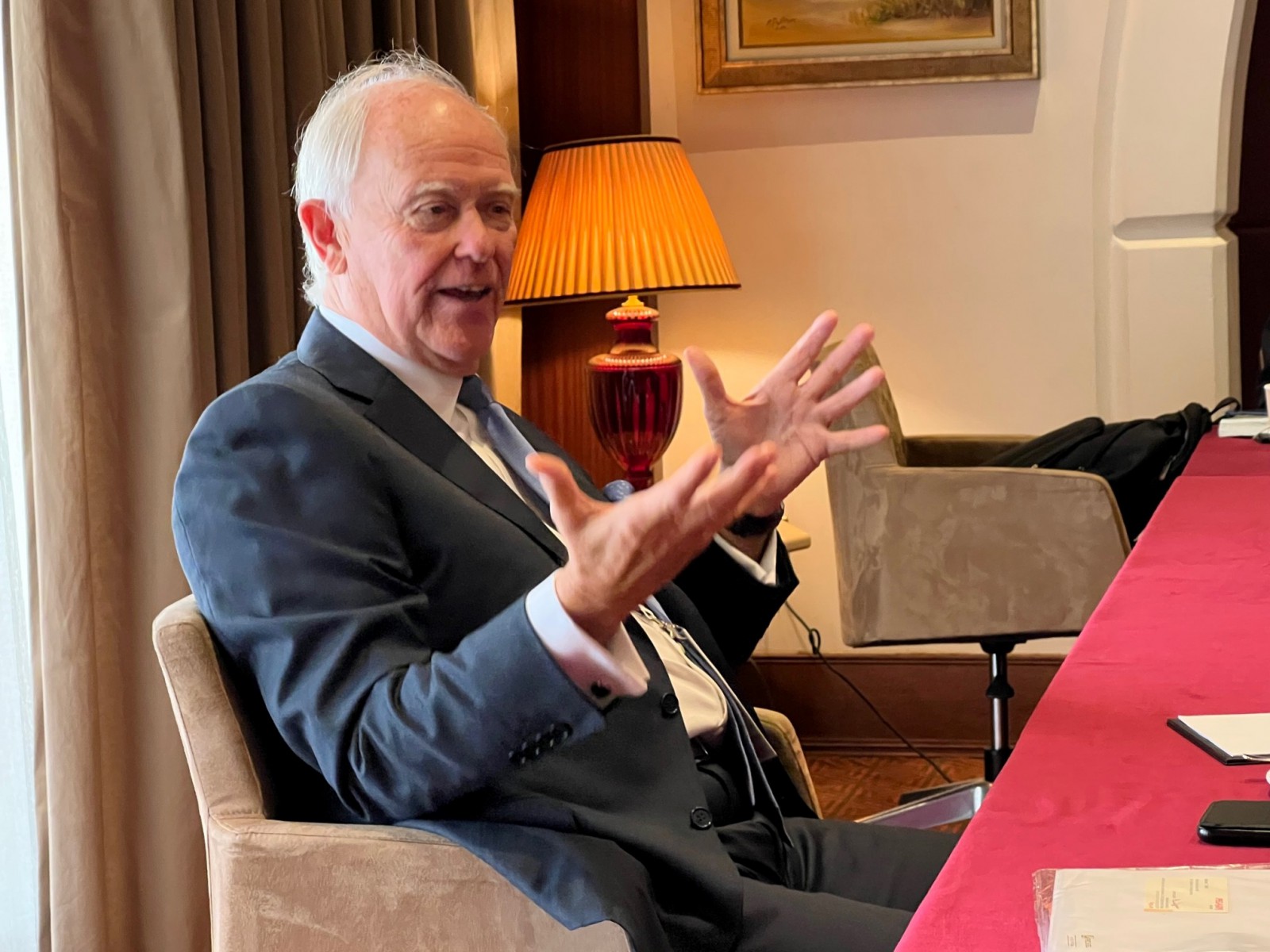 This past week he was at the IATA AGM in Doha and then in Berlin, to try to pry landing rights in the German capital from the government, something he’s failed to achieve for one and a half decades.

And again, the chancellor and his cabinet gave Emirates the cold shoulder, engaging in pure “Lufthansa speak” as Clark calls it. Between meetings at the chancellery and other ministries, the Emirates President made time to speak exclusively to Andreas Spaeth, AirlineRatings.com European Editor, about some wider personal and industry issues.

How did aviation get into the post-pandemic mess it currently finds itself in throughout Europe and other parts of the world?

Sir Tim Clark: I said it many times over the last couple of years: The bow wave is coming. You have to prepare, there is a tsunami of demand coming. Nobody was listening, and now we face big problems with airports like Heathrow and Amsterdam breaking down. We prepared ourselves in Dubai and in the airline for this, we got our fleet ready, we are still getting crews coming in, but we opened all five terminals at Dubai airport in October of last year. And I could see for myself that Hamad International Airport in Doha was packed in the morning peak this week, with not enough seats available and me not even been admitted to the overcrowded lounge. They see the same bow wave as we are.

How do you see things going forward?

Demand is strong and sustained, we are looking at our bookings from July to September and Christmas, they are soaring above 2019 levels, even at the prices, we are now having to charge due to the fuel price surge. The question is how long is this going to last before the global economy starts to tip with interest rates going up and inflation rising and fuel prices at these ridiculous levels, this is unsustainable, it shouldn’t be out there anywhere. But I’ve been faced with recessions about 50 times in the 50 years I’ve been here, I’ll deal with it if it happens rather than restrict capacity before because somebody says there is going to be a recession.

READ: Qantas to launch JoBurg and Jakarta flights from Perth

Talking about your long time in aviation, can you sketch some of the main underlining scenarios of the industry during your half-century being an integral part of it?

Of all the facets, be it fleet, aircraft design, aero-politics, commercialism, things like the move from the aero-political pre-determinist models that used to drive everything, to the complete sweep up to the multilateralism of the 1990s driven by the Clinton government, which said let’s knock down all these old barriers and whose mantra was open skies, it was transformation. Not just for Emirates. By luck, the Americans said to the world: If you want to fly to America, you have to do an open skies agreement with us. That’s what set the model for the whole world. It gave us exactly what we needed to grow our business at a pace. This was the best thing that could have happened to this little airline of ten or 15 aircraft, and so we started. I remember reshaping the business plans. Emirates was a child of the new world order with regards to liberalization. By the late 1990s, the more we scaled I realized we weren’t gonna meet the demands we thought would happen by mid of the first decade of the new millennium.

How was your reaction?

That’s why we entered the A380 debate in February 2000. Then the A380 was so transformational, as was the Boeing 777-300ER. When all those barriers dropped away, suddenly there was this ocean of opportunity opening up aero-politically, we could basically go anywhere. So we created the biggest sixth freedom model that the world has ever seen. And that caused all sorts of mayhem. I guess Emirates was at the right time at the right place. For me personally, the aero-political drop-down was most significant as was our ability to engage with the manufacturers to design the aircraft that we wanted for the medium to long-haul. We are having a big say in that, illustrated by both the latest Boeing 777-9, but also the Airbus A330-200, A340-500 of course, bless it, and the A350-900 because it was built for us. I asked them to build a 777-200 lookalike, which is what they did, but it just came out eleven tons too heavy so we walked from the contract. But now we are going back in again. We didn’t set out to influence the industry, we just changed the industry’s thinking.

You define your job in a much more universal way, being hands-on on so many fronts down to drawing detailed design sketches yourselves…

Yes I do that, and I’m still designing, I’m still changing products and all these kinds of things. The guys in our company know how I think, they may be just a bit nervous because I’m at the top of the chain, I can make these and I can execute. These guys may have very good ideas but worry about me not liking them. I look from the micro to the macro, having done the wall coverings of the A380, the shower redesign, the showers themselves and many others. It’s been a journey for me which has been so fascinating. These other CEOs, my peer group, are not interested in it.

Was this kind of creative penchant rarely seen in airline leaders something you already had early on?

When I came to market age of 22 and I looked around me as a young planner and I thought this can’t last how we do things at British Caledonian at the time. This is all wrong, this is not sustainable in the next twenty years. That’s one of the reasons I left and went to Gulf Air, I was frustrated. When I then came from Gulf Air to Emirates, I was given a clean sheet of paper with Maurice Flanagan and Sheikh Mohamed saying: There you are, get on with it, and they never interjected. When I came onto the A380, I felt like an artist with an empty canvas. You could actually get out and do it.

It recently sounded as if you would stay on in your top job at least until early 2023, is that true?

By the end of the current financial year on March 31st, 2023 I hope we will close out with a profit and cash on the balance sheet. I’m not saying my job is done, but I didn’t want to go. I was torn, even though I said I was going to go, I felt really worried about going at that point in time, so I said I’ll stay until we get it right again. But we are still not there yet. It was a kind of personal thing for me really, there were all sorts of issues with my family and what I was gonna do and what I promised them all, but OK, this happened, I’ll stay, and after that, we’ll see what happens.

One big gap you see and raised with Airbus is the lack of any new very large aircraft project on the horizon. Will that backfire at one point?

What have you got there, A380 gone, 747-8 gone, 777-9 looking decidedly flaky, I don’t know what’s going on with that, that leaves you with the A350-900 and -1000 as your largest widebodies, what else is there going forward? You’ve got to look at the mid-2030s, and if you what a bigger beast, and you have to believe that, so I say, extrapolate and recapture the pre-2019 growth curve, take it out to the mid-2030s, unconstrained, 4% growth per annum, where does it get you? Eight billion people travelling. How are you going to accommodate that eight billion if you leave it to the single aisles and the small twins? You won’t be able to accommodate it and you suppress demand and the prices will rocket for airfares, so the days of cheap airfares will go because prices will be so high because that’s all we can do.

What do you suggest?

The trick is to come up with an aeroplane that does all of that but is technologically so advanced it can embrace synthetic fuels and work on them in the mid-2030s. I   met with Guillaume Faury of Airbus to start that thinking going, and get an answer to the question: Guys, is this it? He sold out on the single aisles, he’s probably going to sell out on the A350s because of the demise of what’s going on at Boeing, I don’t know what’s happening there. In the end, you have to think about the future.

In which direction should thinking go?

If you’ve got environmentally friendly propulsion using synthetic fuel, you need to ask what then would be the sizing of the aircraft that you need to meet the medium to long-haul demands for super connectors like us and other carriers. Don’t tell me that everybody is going down to 234 seats in four classes on the 777-9 when they have 519 seats on the A380. You need to do something, otherwise, you go out of business. I hope that collectively, we can find a way, to get our minds together to decide what is that aircraft going to look like? Lighter, faster, and cheap to operate, you then have the propulsions which possibly work off synthetic fuel, partly or 100% eventually. I would build another A380 twice the size because of the zero-emissions engines we have now, with four, possibly three engines.