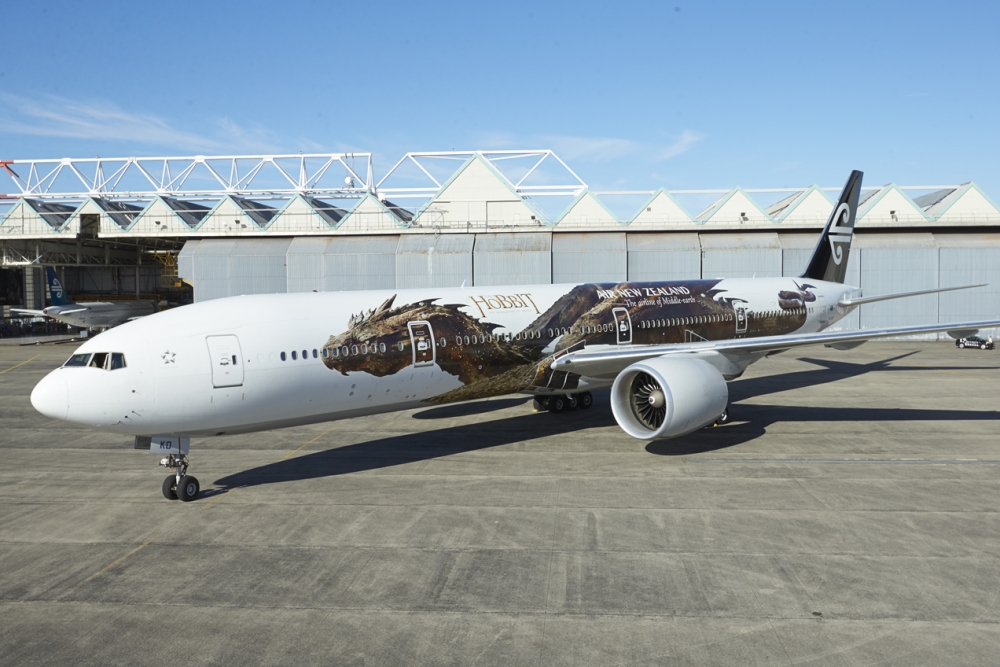 Air New Zealand has revealed Peter Jackson’s theatrical interpretation of the mythical Dragon Smaug exclusively to the world, ten days ahead of the release of The Hobbit: The Desolation of Smaug, a production of New Line Cinema and Metro-Goldwyn-Mayer Pictures.

A Boeing 777-300ER aircraft with the 54 metre (177 feet) long Dragon emblazoned on both sides was unveiled in Auckland on Monday December 2.

The first film in The Hobbit Trilogy, The Hobbit: An Unexpected Journey famously featured just Smaug’s eye, leaving it to fans to envisage for themselves how he might look in Peter Jackson’s imagination.

Air New Zealand Chief Executive Officer Christopher Luxon says the airline has been in discussions for some time around permission to feature Smaug on the ‘flying billboard’ ahead of the film’s official release.

“For our partners to allow Air New Zealand to reveal their star to the world is a huge privilege. We worked with Weta Digital which designed the graphic especially for us for this purpose.”

This is the second 777-300ER inspired by The Hobbit Trilogy in the Air New Zealand fleet. The first was unveiled last year to coincide with the launch of The Hobbit: An Unexpected Journey and has been wowing fans around the world since.

Director of The Hobbit Trilogy, Sir Peter Jackson, says while the first aircraft, featuring various characters from the first film, was extremely impressive the enormous scale of the single Dragon running the entire length of the aircraft is even more awe inspiring.

“To see Smaug fly off the big screen and into the skies like this is pretty exciting.  We’re proud to debut him here in New Zealand, where our team has worked so hard to bring him to life.”

Visual Effects Supervisor Eric Saindon of Weta Digital says designing a graphic which not only fits with Peter Jackson’s creative vision but also meets the various specifications required to fit on an aircraft was no mean feat.

“Capturing Smaug’s presence and the amazing detail in his design while accommodating the windows, doors and wing shape was quite a different experience for us,” said Saindon.   “It was great to see Smaug brought to life, and he appears even larger in the film!”

The aircraft will head to Los Angeles Monday evening, to arrive just in time for the premiere on December 2nd local time.

As part of its global marketing campaign around The Hobbit:The Desolation of Smaug, the airline has also released a video entitled Just another day in Middle-earth, which features staff from across its business, with a magical Hobbit movie-inspired twist. The video has been viewed online 1.5 million times in less than two weeks.