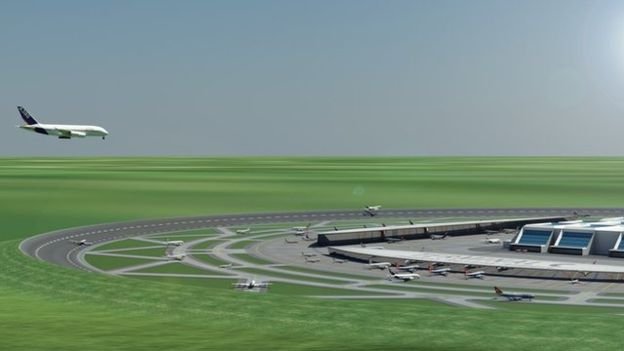 A BBC video is taking YouTube by storm, chronicling one man’s vision of circular runways that could revolutionize the way the world travels.

Researcher Henk Hesselink is working with Netherlands Aerospace Centre to test the idea but questions remain about the idea.

Hesselink tells the BBC:  “My big idea is a circular runway. Aircraft can take off and land at points on the circle to make certain that they have no crosswind. He was inspired by watching scary crosswind landings on YouTube.

His team is using simulators to test the concept, one that could allow up to three aircraft to takeoff and land simultaneously on a 3.5-kilometre runway. The runway’s sides would be banked, like those of an automobile racetrack.

“Upon landing, because of the centrifugal force an airplane would automatically go slower and go towards the center of the runway,’’ Hesselink says. “Passengers will not feel like they’re on a roller coaster. They will [only] use part of the circle,” as well as avoiding tricky landings."

“There’s the possibility of less fuel burn in the area around the airfields,” he adds. “We can also try procedures to make certain that the environment is experiencing less noise.

“Because we now have the possibility to fly in from any direction, towards any direction we can make the decision where to fly and where to avoid flying.

“We can also decide that anyone living around the airport has a similar amount of noise.”

The plan could boost airport capacity, allowing one circular runway to perform the work of four conventional airstrips.

Hesselink’s vision is bold, flying in the face of the straight line, point-of-the-compass based configuration of virtually every airport on the planet.

Before circular commercial runways are built, however, some basic questions need to be answered, all of them concerned with safety:

None of this is to say there might not be circular runways in your future—just that there’s a lot of research yet to be done.

The European Commission has funded some testing already. But apart from military trials in the mid-1960s, a commercial circular runway has never been constructed.