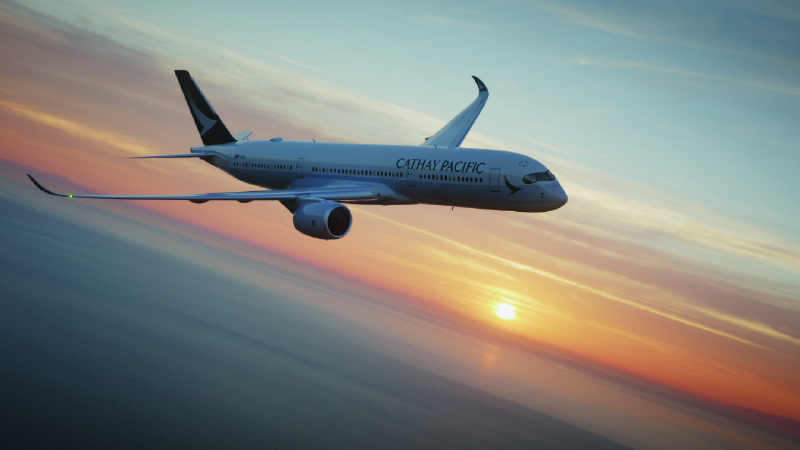 Cathay Pacific is increasing its Airbus A350 services to Australia from late October with Perth to see the fuel-efficient jet on a scheduled service for the first time and Melbourne to get a second flight.

Cathay will introduce the A350 on its daily CX170/171 Perth service from October 29 while Melbourne will get its second service (CX163/178) on the same date.

A new wing design combines with other aerodynamic and system improvements as well as a carbon fibre fuselage and fuel-efficient Rolls-Royce engines to deliver a 25 per cent reduction in fuel burn.

Along with reduced maintenance requirements, this means a plane that is significantly cheaper to operate.

Features include vertical walls and larger windows make the 280-seat plane, already touted as the widest in its class, seem even bigger than it is.

here are also outsize luggage bins big enough to take roller bags on their side and Airbus says the cabin is 50 per cent quieter than older aircraft in terms of perceived noise.

A lower cabin altitude of 6,000ft, compared to as much as 8000ft in some other planes, helps fight jetlag and LED lighting helps set the mood.

The A350 offers 38 seats in business class, 28 in premium economy and 214 in economy class. Cathay says that moving from the Airbus A330 to an A350 equates to more than 406 additional seats per week.

“We’ve been flying into Perth since 1970 and we’re thrilled to be introducing our newest aircraft on our direct services to and from Hong Kong,’’ said Cathay general manager Southwest Pacific Nelson Chin.

“It not only means a bigger aircraft, it also offers more comfortable cabins and more seats using our very latest designs.

“We’re also delighted to see a second A350 on our Melbourne services – which will make two out of three daily services on the A350, with the third served by a Boeing 777. ‘’