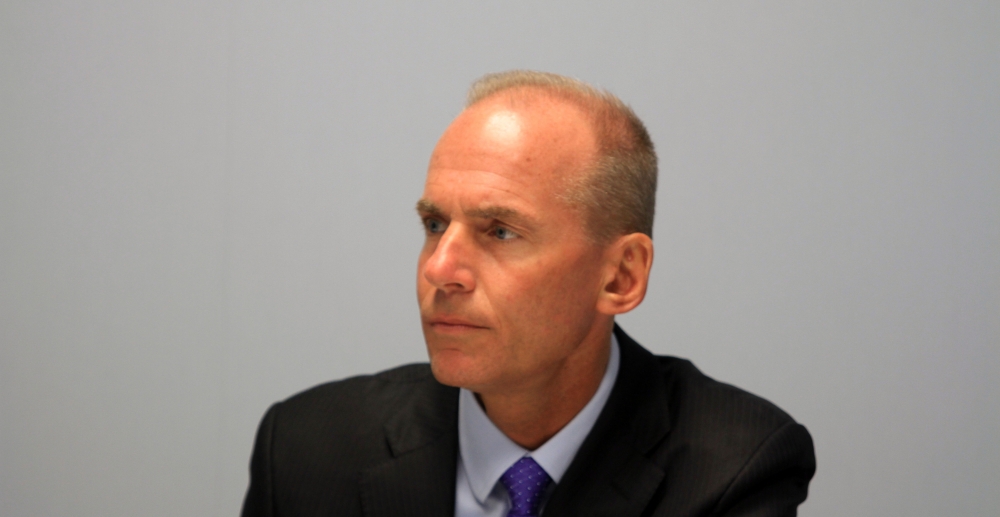 As Boeing celebrates its 100th anniversary Chairman and CEO Dennis Muilenburg says the company is arguably in as strong a position as any time in its history.

“But that said, the market place is tough and competitive with economics challenges around the globe that we have to deal with and while we are in a strong position, we can’t stand still,” Mr Muilenburg told a media round table at the 2016 Farnborough Air Show.

And in a warning to competitors Mr Muilenburg said the company was “playing offense not defence” as it approaches the future. “We are positioning ourselves for the future with work on productivity and competitiveness and investing in innovation.”

But Mr Muilenburg said Boeing will not be rushed into any early decisions on building a new aircraft to serve what is now called the middle of the market (MOM) between its 180-220 seat single aisle 737s and the much larger twin-aisle 270-330 seat 787.

With regard to the 787 development costs, Mr Muilenburg said that the company is now delivering cash on each 787 delivered. “We have delivered more than 400 and we have a backlog of firm orders of more than 700. The aircraft is doing very well and the operating costs of 20 to 25 per cent better is being delivered.”

What is significant said Mr Muilenburg is that the 787 has opened up 100 new routes since it was introduced into service.

“We are now in a positive cash position on the [787] program and we have the rate up to 12 a month,” he said. Mr Muilenburg added that now that the 787 supply chain was stable Boeing was working with suppliers to drive greater efficiencies.

“The opportunities to expand the current order book are clear.” Some analysts suggest that Boeing will build between 3,000 and 4,000 787s, which would make it the industry’s most successful wide body program.

Mr Muilenburg said that orders for its narrow body 737 program were very strong and the production rate is climbing from the current 42 a month to 47, then to 52 and finally 57 by 2019. “We are oversold,” he said. Boeing will deliver the first 737 MAX ahead of schedule in the second quarter of 2017.

“However the wide-body market is a little hesitant,” he added but as he was saying those words, Boeing was inking a deal with Russia’s Volga-Dnepr for 16 more 747-8 freighters that will keep the iconic jumbo alive through 2019 when Boeing expects an upturn in cargo to breath new life into the program.

By 2019 there would 200 to 300 747 freighters said Mr Muilenburg which would need replacing and the 747-8 was unmatched in the marketplace in capability. Currently, Boeing is building 747s at a rate of just 6 aircraft a year – its lowest rate ever.