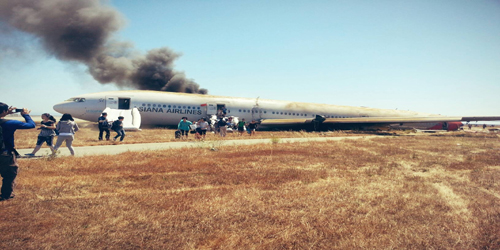 The speed of the Asiana 777, just seconds before landing, has become the major focus of investigators probing Saturday’s crash at San Francisco airport which killed two and injured scores of other passengers.

National Transportation Safety Board (NTSB) chairman Deborah Hersman told reporters at a news conference Sunday that crew called out to abort the landing about 1.5 seconds before impact.

Hersman said the 777 was travelling at a speed well below the target landing speed of 137 knots, or 157 mph or 253km/hr.
“We’re not talking about a few knots,” said Hersman.

The NTSB also said that the 777’s stick shaker — a piece of safety equipment that shakes the control column and warns pilots of an impending stall — went off seconds before the crash.

For a minimum speed pilots would typically add about 5 to 6 knots and program this into the auto thrust system which would maintain that speed.

There was no indication on the CVR or ATC tapes of any discussions between the pilots and the air traffic controllers that there were problems with the 777.

The NTSB is looking at the impact of the shutdown of the airport’s instrument landing system which provides two guides – lateral and vertical – to the pilots.

One of the survivors of the crash Elliott Stone told CNN that as the plane came in to land, it appeared the pilot “sped up, like the pilot knew he was short.”

On impact the 777’s tail assembly ripped away, sending the plane into a spin ripping off the undercarriage and engines.
Eye witnesses say that after a loud bang there was a brief but large fireball from underneath the plane, which may have been one of the engines ripping off its mounting.

The 777 came to rest between the two parallel runways with its rear pressure bulkhead, near where the flight attendants were seated, split open.

Miraculously the 777’s wings, which hold all the fuel, stayed intact, almost certainly preventing a catastrophic explosion and possibly hundreds of deaths.

However a fire broke out on the right side of the 777, probably started by fuel spilt from the engine that came to rest against the plane’s fuselage.

The 777 was operating Flt 214 from Shanghai to San Francisco via Seoul with 307 passengers and crew and it struck the sea wall 100m short of the runway threshold at 11.36am local time.

Among those on board were 77 Koreans, 141 Chinese, 61 US citizens, and one Japanese national, Asiana said in a statement
The San Francisco Fire Department took 181 to hospitals in the immediate area.

San Francisco Mayor Ed Lee told Bloomberg it was very lucky there were so many survivors.

“This could have been much worse,” Mr Lee said.

“Some of them are in shock. Some are very tearful, some look stunned,” Chris Barton, chief of the hospital’s emergency department, told Bloomberg yesterday.

“Overall I think it’s amazing how most of the patients are coping.”

However Mr Barton said that there were a number of patients with spine injuries.

“I’m guessing it’s from the force of the plane going down on the long axis of the spine.”

Weather has all but been ruled out as a factor in the crash.

Arrivals at San Francisco airport were being conducted under visual flight rules and typically plane would not have been using auto land capability.

Both San Francisco airport and the Boeing 777 are equipped for the highest auto land capability.

Immediately after the crash the airport was closed to all traffic with up to 300 flights diverted or cancelled.

Later two of the airport’s four runways were reopened.

The airline has a fleet of 78 planes.

There are over 1000 Boeing 777s in service and the aircraft has a fatality free crash record up till this accident.

The last hull loss was to a British Airways 777 on January 17 2008 when fuel icing caused a restriction in the fuel lines reducing power to the engines.

The British Airways 777 landed 300 mtrs short of the runway and all 152 passengers and crew walked away.

An Egypt Air 777 suffered an electrical fire on the ground in 2011 after a fault in the cockpit and was written off.

According to IATA for 2012 the industry Western-built jet hull loss rate was 0.20 per million sectors flown, which is a 77% improvement in the accident rate over the last 10 years.

According to IATA the region with the worst crash rate for western built aircraft is Africa with 3.71 crashes per million sectors.