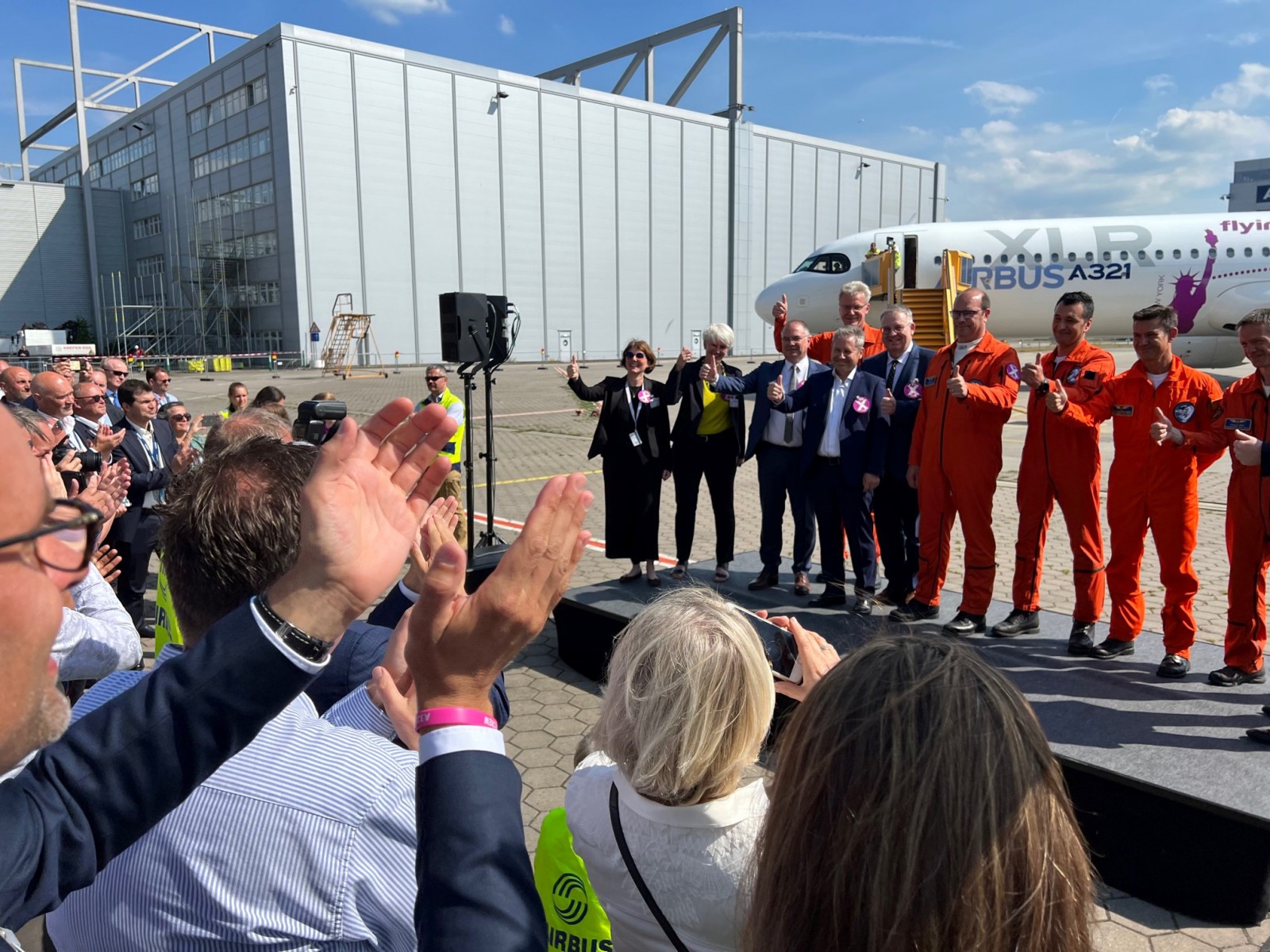 Our European Editor Andreas Spaeth was at the first flight of the Airbus A321XLR and here are his first-hand impressions.

At 11 am local time in Hamburg on Wednesday, Michael Menking became a bit emotional. The head of the Airbus A320 programme commented on what he saw and felt, standing on the side of the runway at the Airbus factory in Finkenwerder: “At this minute, the first A321XLR comes taxying along towards takeoff, this is a special moment which we very much looked forward to, and I feel it,” said Menking.

“More than 1,500 employees in Germany, France, the UK and Spain have worked on this since 2018.” The newest version of the A321, which originally had its first flight from the very same runway in Finkenwerder back in 1993, has proved to be a huge commercial success since it was first offered in an XLR (for “extra long-range”) version, selling 508 airframes to date according to industry sources.

The biggest takers will be Indigo (80), American and United Airlines (50 each), Wizzair (47) and Jetstar (36). Qantas also has 20 XLRs on order. The main draw is the aircraft’s range of up to eleven hours of flight time over a distance of up to 8,700km. The principal change compared to other versions is the Rear Centre Tank, adding another 12,900 litres of fuel, and the optional Additional Forward Tank (3,120 litres). This means the existing fuel capacity of a basic A321 of 19 tons is supplemented by another up to 13.8 tons in the two extra tanks, significantly raising the amount of fuel available.

At 11.05 am, the sun had just appeared from behind clouds, and a Falcon 50 chase plane was getting ready to take off ahead of the first flight A321XLR test aircraft (MSN11000, registered F-WXLR). But then, unexpectedly, without the usually lengthy engine run-ups before a first flight, the prototype was accelerating and taking off in front of a few dozen members of the media, some Airbus executives and hundreds of employees, overall a low-key affair.

The aircraft circled over the North Sea and crisscrossed Northern Germany at altitudes from 5,000 to over 31,000 feet, then coming in for a spectacular missed approach and go-around before finally landing back at its origin four hours and 35 minutes later. Here the aircraft’s return was celebrated by the fire brigade’s water salute and cheered upon by enthusiastic employees gathered in front of a stage in the warm spring sunshine.

Test pilot Thierry Diez, a 55-year-old Frenchman with over 8,000 flight hours under his belt took the stage first. “With this aircraft we’ll have something as versatile as a Swiss knife, enabling us to do short, medium and long haul with the same type rating for pilots.”

German flight test engineer Frank Hohmeister reminded the onlookers of the first flight of the A321 in Finkenwerder 29 years ago. “I was watching it from here then, such as you did now, but being on board this first flight today was an even more moving moment for me. All of you Airbus workers here have done a superb job, it was fun to fly the aircraft.”

The A321XLR has a new flight management system, which will be tested among all the other refinements such as the new fuel system or new landing gear, which will all be evaluated in about one thousand test flight hours spread over three aircraft from their Toulouse base. Despite his high spirits after the first XLR touched down again, Hohmeister was well aware that the milestone achieved now “was only the start of the second marathon to achieve certification. That then is something you can actually hugely enjoy, a very moving moment, that’s when a weight falls from your body”, the flight test engineer told Airline Ratings in Hamburg.

According to media reports, EASA has not yet agreed with Airbus on a timeline for certification, which is unusual at the milestone of the first flight. There is a delay of entry into service by at least three months to early 2024 because of negotiations between the manufacturer and Airbus about the risk of fire coming from the new fuel tanks in the risk of a belly landing.

“EASA has not yet accepted Airbus proposals”, Reuters reported a person familiar with the matter as saying. On the eve of the first XLR flight in Hamburg, Michael Menking insisted: “I don’t think they will be a further delay of certification, we still plan for the entry into service for early 2024 and I don’t see this in doubt.”

Airbus proposes cabin layouts of 174 seats (12 Business, 24 Premium Economy and 138 Economy Class), 187 seats (16 Business and 171 Economy) or a high-density version of 240 passengers. Also this week, Hamburg hosts the Aircraft Interiors Expo (AIX). One big trend there among seat manufacturers are designs for full-flat narrowbody Business Class compartments, some suites for the first row offering even more floor space than comparable offerings on widebodies.

JetBlue’s Mint suite premium product is an example of this, which already flies transatlantic services between New York and London on the current A321LR. The weight of such offerings, however, might affect the range of the XLR, “it depends on what airlines chose to put on board. We see many long-haul flights globally moving towards the A321XLR and at the same time, a trend to offer more comfort on long routes also on narrowbodies”, said Gary O’Donnell, head of the A321XLR programme in Hamburg.