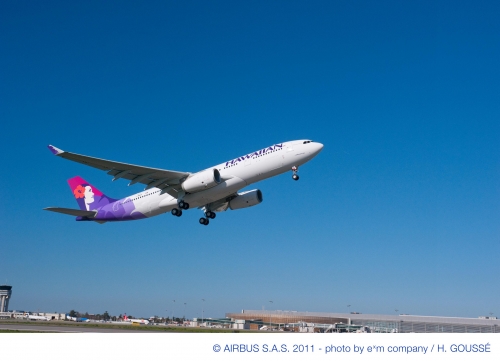 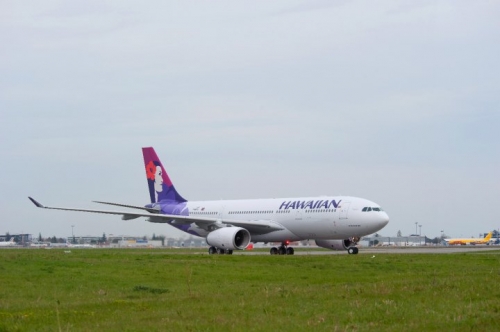 Denied Boarding
When the carrier is unable to provide previously confirmed space due to more passengers holding confirmed reservations and tickets on a flight than there are available seats on that flight, the carrier will request passengers who are willing to do so, to voluntarily relinquish their confirmed reserved space in exchange for compensation ( travel credit valid for the purchase of transportation instead of monetary compensation. The travel credit will be valid for travel on HA within 365 days from the date of issue ). If a passenger is asked to volunteer, the carrier will not later deny boarding to that passenger involuntarily unless that passenger was informed at the time he was asked to volunteer that there was a possibility of being denied boarding involuntarily, and of the amount of compensation to which he would have been entitled in that event.

In the event the flight is known to be oversold while passengers are still in the process of check-in, the passengers will be accepted for the flight in the order of “check-in.”

In the event the flight is known to be oversold only after boarding, the passengers will be accepted for the flight in the order of boarding.When a passenger has been denied boarding, whether voluntarily or involuntarily, HA will transport the passenger without stopover on its next flight on which space is available at no additional cost to the passenger, regardless of class of service.

Passengers will be informed of the available amenities when a delay is expected to exceed 4 hours.

Hotel Rooms – HA will provide one-night’s lodging at accommodation selected by HA when a passenger’s delay is expected to exceed 4 hours and extend into the period 10:00 pm through 6:00 am, and no scheduled alternate transportation is available to the passenger’s destination or stopover point. HA will not provide lodging for passengers who reside in the city where the interruption occurs.

Local Ground Transportation will be provided to the downtown area or from/to local hotel whichever is applicable.

Communications – One long distance telephone call will be allowed between any two points in the United States.

In lieu of the above, and subject to passenger’s approval, HA will compensate the passenger with credit valid for the purchase of transportation. The credit will be valid for travel only on HA within 365 days of the date of issue and will apply only to online transportation via HA, may not be endorsed to or accepted by any other carrier and is not refundable to, saleable by, transferable by or assignable by the passenger.

The provisions above do not apply on a flight which is delayed or cancelled because of U.S. weather bureau observations or forecasts unless the passenger is at a point other than their point of origin or destination. A passenger that decides not to travel based on the likelyhood of weather diversions will be provided ground transport back to their hotel or residence but no other amenitites will be provided

EXCEPTION: The services and amenities described above will not be provided for flight interruption, cancellation or delay caused by acts of God, riots, civil commotions, government embargoes or regulations, wars, hostilities, disturbances, adverse weather conditions, labor disputes, air traffic congestion, airport closure or interline misconnection due to delay of other carriers.

For domestic and international flights,  Hawaiian will not permit an aircraft to remain on the tarmac for more than three or four hours respectively before allowing passengers the option and opportunity to deplane provided it is safe to do so. If extended delays (over two (2) hours) are encountered for passengers already boarded and after the aircraft leaves the gate (in case of departure) or touches down (in the case of arrival), HA will provide food (snack mix, pretzels etc.), water, juice and/or soft drinks, consistent with passenger and employee safety and applicable laws and regulations.

Baggage
A Baggage Irregularity Report (BIR) or Baggage Damage Report is required to be completed in writing by the passenger upon arrival or at least within 4 hours of flight arrival at the Baggage Service counter for any delayed, lost, or damaged checked baggage.

Liability for the loss of, damage to, or the delay in the delivery of, any personal property, baggage