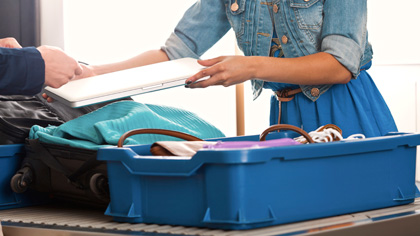 Samsung Galaxy Note7 users who haven’t returned their phones should use it to make a note to themselves:  don’t try to take your phone on a flight unless you want to risk being denied boarding.

Airlines globally have been implementing a blanket ban on Note 7s after the US Federal Aviation Administration and US Department of Transportation issued an emergency order prohibiting the carriage of the troubled devices on US carriers or flights to or from the US  from October 15. The ban applies to phones carried on a person, in checked baggage or in carry-on.

Carriers outside the US which have implemented the ban include Qantas, Jetstar, Air New Zealand, AirAsia, Singapore Airlines and Malaysia Airlines.

Samsung announced last week it had stopped making the phones after a number of incidents in which they overheated began smoking or caught fire. The manufacturer recalled the original model only to find its replacement also had problems.  It is offering refunds or to replace a Note7 with a different device.

US authorities are now treating he phones as forbidden hazardous material under the Federal Hazardous Material Regulations and have also banned their transportation as air cargo.

Airlines in the US have been told to deny boarding to passengers found with the smartphones unless they give it up and flight crew have been told that phones found on aircraft cannot be kept in overhead luggage compartments, carry-on baggage, or seat-back pockets during the flight.

Passengers who attempt to evade the ban by packing their phone in checked luggage have been warned they could be subject to criminal prosecution as well as fines.

“We recognize that banning these phones from airlines will inconvenience some passengers, but the safety of all those aboard an aircraft must take priority,” US Transportation Secretary Anthony Foxx said. “We are taking this additional step because even one fire incident inflight poses a high risk of severe personal injury and puts many lives at risk.”

Samsung has been working with airlines and airports and in Australia has set up service points at bigger airports to allow customers to exchange Note7s for an alternative device before they go through security screening. Other Samsung devices are not affected by the ban.

“Multiple airlines have prohibited the carriage of Galaxy Note7 devices on-board flights (both international and domestic) for both carry-on and checked baggage.’’ the manufacturer, which apologised to customers for the inconvenience, said on its website. “Airline passengers will not be permitted to take a Galaxy Note7 on a flight, either switched on or turned-off. ‘’

A Samsung spokeswoman said that globally the company was providing support to Note7 owners in as many locations as possible "including at some of the most frequently visited airports around the world".

"We know this ban of the Galaxy Note7 on flights is an inconvenience to our customers but safety has to remain our top priority,'' she said.