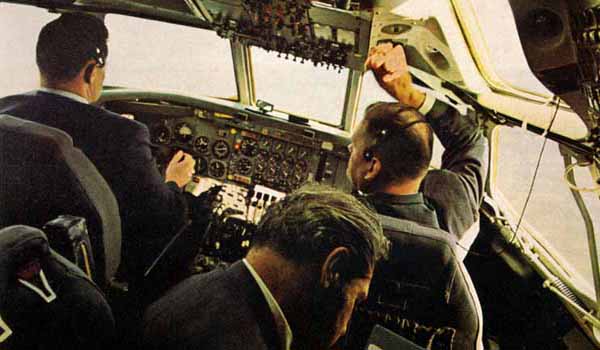 The Douglas DC-8 cockpit shown here, like those of other first-generation jetliners, was considered not just state-of-the-art in the late 1950s, but more like a futuristic science fiction spacecraft from a decade earlier. Exhaust temp gauges and jet igniters replaced prop synchronizers and engine analyzers of the piston era, while flight crew comfort and inflight visibility were improved significantly.

As impressive as all this may have been at the dawn of the Jet Age, the technology represented in this advertisement pales by comparison to the latest digital cockpits and giant CRT screens of new airliners in service today. Let’s take a look at some of the staples of jet airliner cockpit design shown in this ad, and see how many are no longer required in commercial aircraft of the digital era.

For starters, there are three men. The Captain, at left, is accompanied by the co-pilot, or First Officer. Sitting sideways behind them is the Flight Engineer, responsible for monitoring and controlling the aircraft’s engines and onboard systems. Established in the days of complex four-engine piston-powered airliners like the Stratocruiser and Constellation, Flight Engineers served a critical function. If they weren’t onboard, the airplanes didn’t fly.

And speaking of men, flight crews are now composed of highly capable men and women of all nationalities and races, showing how diversity has firmly entered the aviation realm. One major difference from the DC-8, however, is that today, only a Captain and First Officer are required to fly the airplane, as the term “Flight Engineer” joins the same lexicon of obsolete job titles as “locomotive fireman” and “lamp lighter.” That job now goes to a series of flight system computers.

Next are those round dials on the instrument panel, referred to today by senior crewmembers as “steam gauges.” Counting the number of engine gauges in the center stack, we see four, which is twice as many found on most jetliner cockpits today. The thought of twin-engine airliners flying any long-distance routes would have been sheer folly in 1958, yet the longest-range jetliners capable of flying between any two cities on earth today are powered by only two engines – each one producing more thrust than all four engines on those first DC-8s!

Last, but not least, are the cockpit windows in this photo – you can see seven of the nine total. Designed to achieve the lowest Mach number of boundary layer airflow over the cockpit, DC-8 and DC-9 windshields gave those airplanes the quietest cockpits of that time period. The two large upper panes, called “eyebrow windows,” were for maximizing inflight visibility in turns (and sometimes causing sunburned foreheads). Today, the Boeing 787 cockpit has only two window panes-per-side.

Like so many things in aviation and the world, modern airliner cockpits espouse one of life’s best rules – “less is more.”