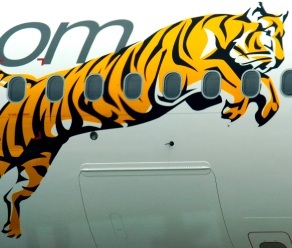 The Australian Competition and Consumer Commission (ACCC) announced this morning that it would not oppose the proposed acquisition by Virgin Australia of 60 per cent of Tiger Airways Australia. Virgin Australia is the second largest domestic airline operator in Australia, behind Qantas and has expressed its intention to triple Tiger’s fleet over the next five years. Tiger started operations in November 2007 and services 16 domestic routes with 11 planes.

“The ACCC’s view is that this acquisition is unlikely to lead to a substantial lessening of competition in the Australian market for domestic air passenger transport services,” ACCC Chairman Rod Sims said. “Essential to reaching this view was the ACCC’s assessment, made after thorough and extensive testing of the issue, that Tiger would be highly unlikely to remain in the local market if the proposed acquisition didn’t proceed. Absent this conclusion the acquisition raised considerable competition concerns.

“In making this assessment the ACCC had particular regard to Tiger Australia’s history of poor financial and operational performance. In six years in Australia, Tiger has never made an operating profit, and its current losses are large. These losses remain a big drag on the entire Tiger group.” The Virgin takeover will bring security to Tiger Airways staff.

The ACCC also tested the likelihood of Tiger Australia’s performance being improved by either its current owner (the Singapore-based Tiger Airways Holdings Limited) or other potential shareholders or joint venture partners if the proposed acquisition did not proceed.

“The ACCC considered it unlikely given the current circumstances that Tiger Australia would be turned around under any of these scenarios to provide vigorous competition as an independent operator. Instead its key assets, being the 11 Airbus aircraft, would very likely be redeployed into the Asian operations of its parent company,” Mr Sims said.

He added that the ACCC would always prefer to see a greater number of independent airlines competing in the domestic market. “However, our investigations showed that Tiger Australia had been unable to establish itself as a viable competitor despite substantial investment and numerous changes of management and strategy over the years,” Mr Sims said. “We concluded that it was highly likely that Tiger Australia would leave the market if this acquisition didn’t go ahead, and accordingly blocking the acquisition would not serve to protect competition. Virgin Australia now has the opportunity to pursue its stated objective of transforming Tiger Australia into an effective competitor to Jetstar for price sensitive travellers.”

The ACCC consulted widely with a range of interested parties, including other airlines, airports, tourism organisations and industry bodies throughout the course of its review.