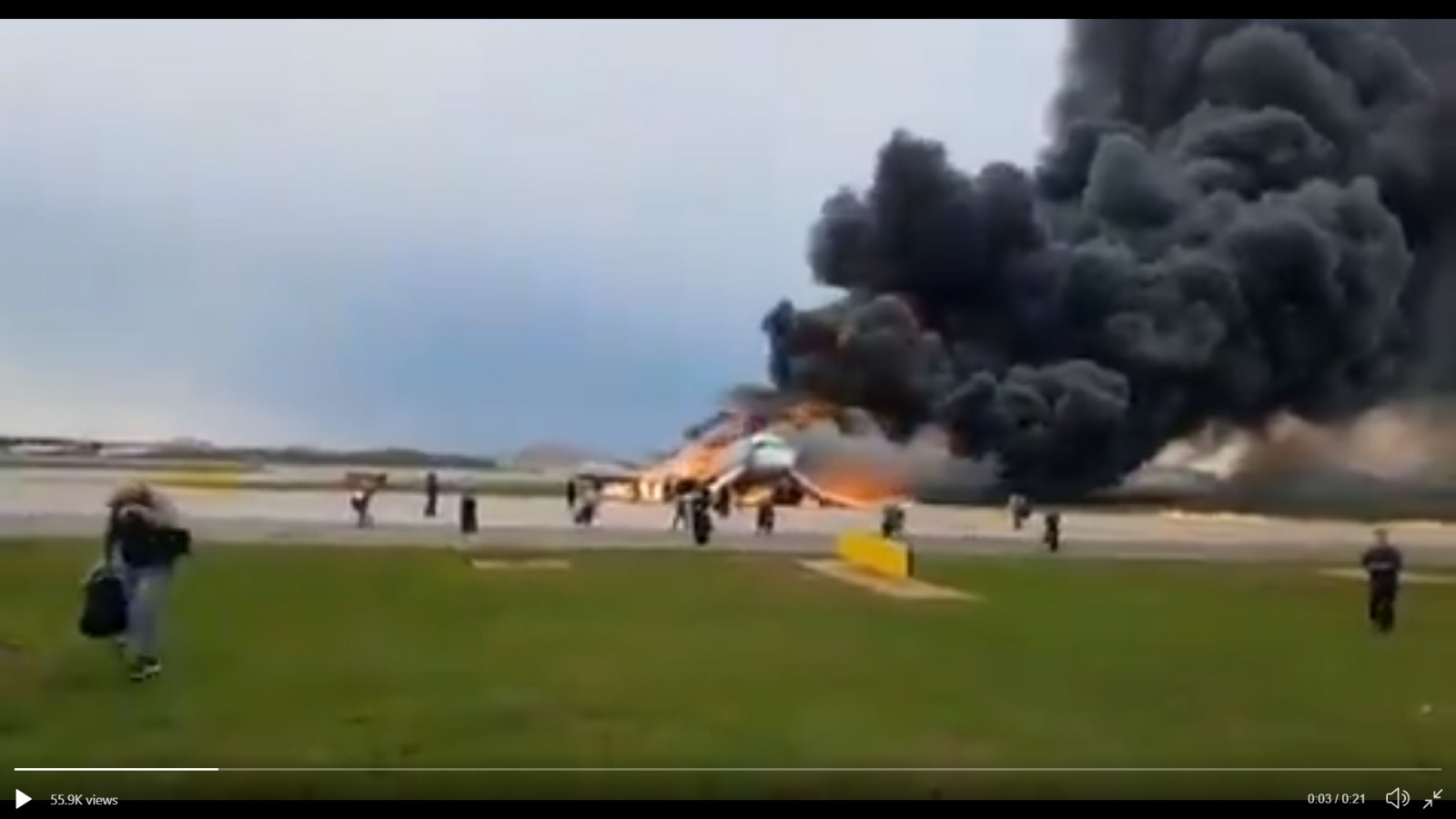 When is the tragic madness going to stop!

Passengers insisting on taking their carry-on baggage off a burning plane and videoing during the evacuation is possibly leading to tragic deaths.

It is reported that 41 of the 78 passengers and crew on Aeroflot flight SU-1492 from Moscow Sheremetyevo to Murmansk have died, possibly some trying to escape the inferno.

Video has emerged showing passengers filming from inside the doomed regional jet, while passengers who did escape the conflagration are seen with their carry-on bags which would have slowed the evacuation.

Passengers are supposed to be able to get off an aircraft with half the doors closed in just 90 seconds! While Aeroflot says that the evacuation was completed in 55 seconds – those were the passengers and crew who survived…only 37.

Airfares would have to triple if aviation regulators were to re-certify aircraft to the reality of these chaotic and tragic passenger evacuations but that is not realistic.

The disastrous situation has been looming for some time with the slow evacuation of an Emirates 777 in Dubai in 2016, an American Airlines Boeing 767 at Chicago in 2016 and a British Airways 777 in Las Vegas in 2015 with many passengers taking their carry-on baggage with them.

There is no question that thoughtless passengers, not following crew instructions are risking their lives, and those of fellow passengers, with the obsession of taking cabin baggage and with them and videoing in an emergency.

In the evacuation certification tests for aircraft, the “passengers” are aircraft manufacturer employees who know the drill and they have no baggage.

Here is the A380 evacuation test.

If regulators were to re-certify the long-range Boeing 777 to the reality of what actually happens, the 550 exit limit aircraft would have to be recertified to just 183 passengers – less than half its typical load.

But for smaller aircraft such as the widely used A320 – and Boeing 737 – which has an exit limit of 195 and a typical configuration of 180 mostly economy passengers the impact would be devastating with a new limit of just 65.

That would mean a tripling of airfares to make the aircraft economically viable and the impact on the industry and the world economy would be devastating. But of course, that is not going to happen so a solution must be found.

The West Australian called for something to be done in 2016 but the warning was not heeded.

However, authorities did express concerns after the British Airways incident at Las Vegas in 2015 when the highly respected British Civil Aviation Authority issued a blunt warning to its airlines: Stop passengers taking their hand luggage off with them in an emergency evacuation!

Many airlines changed their safety instructions but the message appears lost on passengers.

The airline industry needs to take decisive action, perhaps by locking overhead lockers for takeoff and landing, to prevent passengers taking their baggage with them after a plane crash.

Or an extreme measure would be to ban carry-on baggage other than a small bag such as a backpack.

It is sobering to consider that it quite often takes 40 minutes to board a plane because of passenger/ baggage congestion.

Not only does taking your baggage dramatically slow the process, but there’s also a distinct possibility that the bags with protruding metal parts will snag and then deflate the escape slides — rendering them useless.

And in the scramble to get overstuffed bags out of lockers, passengers may be knocked out and the aisle blocked for precious seconds.

There is also the very real prospect of passengers jumping on to the escape slide with their bag and knocking themselves or another passenger out, or even killing them.

Duty-free alcohol is even more lethal because if the bottle breaks there is flammable liquid everywhere, not to mention broken glass.

And some passengers think it’s smart to turn the disaster into a social media events by taking video and pictures and then trying to be the first to upload the images to Facebook or Twitter.