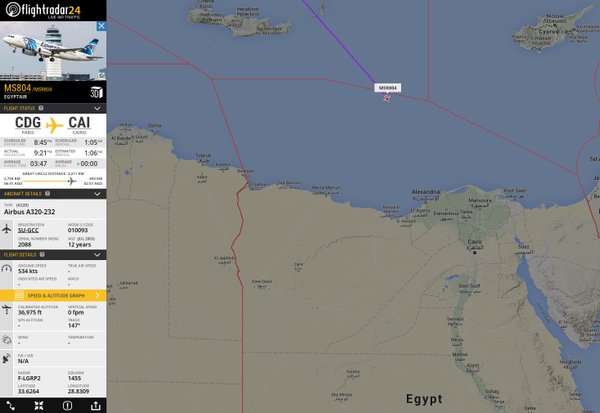 As search and rescue teams continue look for  debris belonging to Egyptair MS804,   security authorities fear that terrorism is the most likely cause of the crash.

A fireball in the sky, no warning from the crew and its disappearance of all radar including military are tell tale signs.

The plane made "sudden swerves" mid-air and plunged before dropping off radars in the southern Mediterranean, Greece's defence minister said.

Sherif Fathi, Egypt's aviation minister, said the possibility of a terror attack was "stronger" than a technical failure.

Mechanical failure is a extremely remote possibility but only a catastrophic disintegration of the engine with parts flying into the fuselage and wing could result in the loss of this aircraft in this way.

While no group has claimed responsibility it could be the work of a lone suicide bomber.

Another possibility is that a bomb, with timer, was smuggled on in Paris or possibly in other airports that the aircraft plane operated in the 24 hours before the doomed flight.

Prior to the Paris to Cairo flight the aircraft had operated from Asmara in Eritera to Cairo and then two return flights to Tunis in Tunisia from Cairo before heading Paris.

While security at the Paris Charles de Gaulle airport is tough the security at some airports in North Africa is under a cloud.

The aviation industry fears an “inside job” with baggage handlers and catering staff having the ability to load devices onto aircraft.

Egypt assured the world that it had beefed up security after the Metrojet crash in October last year that killed 224 when a bomb was smuggled on board possibly be caterers.

However this year a passenger with mental illness was able to get a fake bomb jacket through security despite being frisked.

He then went on to hijack an Egyptair flight to Cyprus and later surrendered.