US investigators have released sobering photos of a massive operation to successfully recover both flight recorders and major components of a Boeing 737-200 freighter that ditched off Hawaii in July.

The pilots were forced to ditch the TransAir cargo jet on July 2 after both engines developed problems shortly after taking off from Honolulu airport for Kahului.

According to The Aviation Herald, the crew stopped the climb out of Honolulu at about 2000ft after reporting problems with the no. 1 engine.

While descending to position for a return to Honolulu, the crew advised that the second engine was running hot and requested US Coast Guard help.

The aircraft was given a heading to land at Honolulu’s Kalaeloa airport but ditched about 2.7  nautical miles (5kms) short of the runway.

Both pilots, the only people on board the freighter, survived the ordeal but the plane broke up and came to rest on an ocean shelf in 350 to 450 feet of water.

An underwater survey of the accident site conducted in July revealed that the fuselage had broken into two pieces.

Four of the six cargo containers remained in the aft section of the freighter and two more were found near the wreckage. A pallet of cargo was also found during the initial search.

The National Transportation Safety Board (NTSB) said TransAir’s insurers contracted several companies to recover the wreckage and cargo over several weeks in October.

“These included the Eclipse Group, which operates the Bold Horizon, a San Diego-based research vessel equipped with a remotely operated vehicle (ROV) and other underwater retrieval equipment,” the NTSB said. “A California-based barge, the Salta Verde, was contracted to lift the two sections of the fuselage and transport them to shore in Honolulu.”

“After engineers and ROV operators rigged it so the wings and tail would not separate during the lift, the fuselage was recovered to the surface and placed on the barge on October 30 and brought onshore at Barbers Point on October 31,” the NTSB said.

The NTSB said the flight data recorder and the cockpit voice recorder would be transported to the NTSB laboratory in Washington where they will be cleaned, dried, downloaded and analyzed.

It said investigators would perform detailed documentation of both sections of the fuselage, which will remain in Hawaii.

“The engines were documented, crated, and will be returned to the barge Salta Verde to sail back to the mainland where each will undergo a teardown examination supervised by an NTSB investigator,” the bureau said.

“The investigation, which is expected to be completed in 12-24 months, will include a comprehensive examination of the airplane structure, engines, systems, maintenance, survival factors, vehicle performance, air traffic control, human factors, federal oversight and emergency response.”

h J R
Airline Ratings @Airline_ratings @sunriseon7: One of the greatest aviation mysteries of all time may have been solved, with aerospace engineer Richard Godfrey telling us he's "very confident" he has found where missing plane MH370 is located. https://t.co/kajsK1TuG8 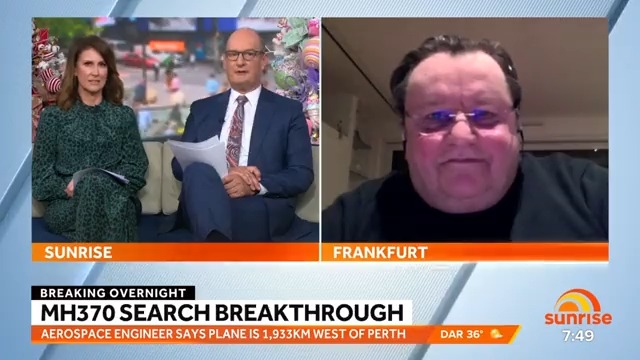