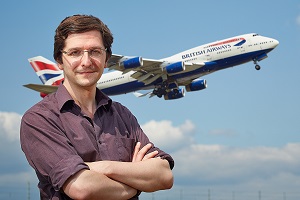 The chances of being tossed around an aircraft cabin by severe turbulence could triple in coming years due to climate change, a new study has found.

The study by University of Reading researcher Dr Paul Williams is the first to examine the impact of climate change on turbulence and the results should make even the most brazen of passengers buckle up.

Although technology that allows aircraft to detect unexpected turbulence has improved, clear air turbulence remains difficult to distinguish and there are still incidents where passengers and cabin crew are injured.

It is already estimated to cost US carriers $US200 million annually and Increased turbulence has implications for aircraft insurers and for the efficiency of airline operations.

The study, published in the journal Advances in Atmospheric Sciences, used super computer simulations to look at how a doubling of carbon dioxide in the atmosphere would affect wintertime turbulence levels on trans-Atlantic routes at about 39,000ft. it said that level of CO2 was widely expected to occur later this century.

The reason for this, according to the study, is that climate change is generating stronger wind shears within the jet stream and that these are a major cause of turbulence.

“Our new study paints the most detailed picture yet of how aircraft turbulence will respond to climate change,’’ Williams said.

“However, even the most seasoned frequent fliers may be alarmed at the prospect of a 149 per cent increase in severe turbulence, which frequently hospitalises air travellers and flight attendants around the world.”

Williams said his priority now was to investigate other flight routes around the world.

“We also need to investigate the altitude and seasonal dependence of the changes, and to analyse different climate models and warming scenarios to quantify the uncertainties,” he said.