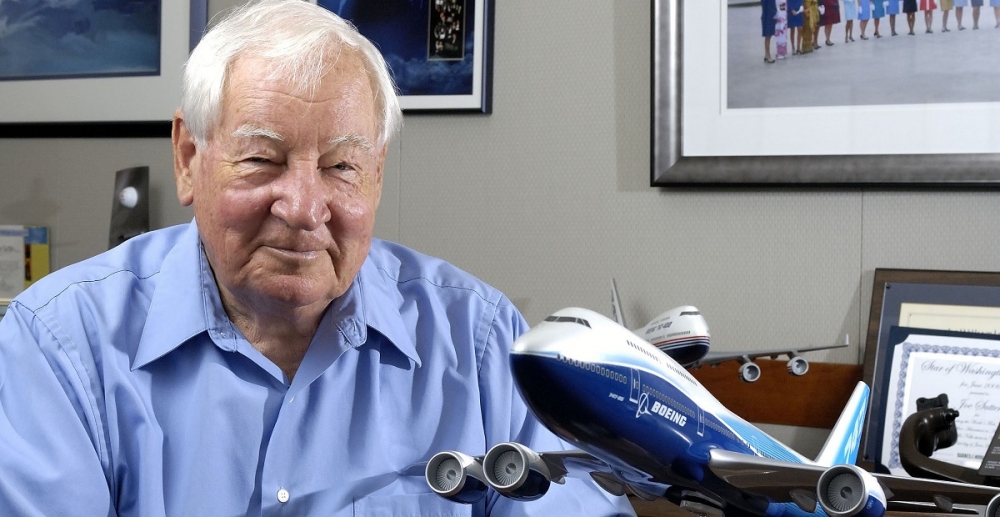 The man who led the development of the jumbo, that opened the world for all, legendary Boeing engineer Joe Sutter had safety as the top priority.

Sutter led the team behind the company’s iconic Boeing 747, known affectionately as the “jumbo jet’’, and was responsible for pushing the boundaries of 1960s aerospace technology.

A native of Boeing’s birthplace, the US city of Seattle, and the son of a Slovenian immigrant, Sutter was born in 1921 and grew up on a hilltop overlooking the manufacturer’s plant.

“My friends all wanted to fly airplanes but I set my heart on designing them,’’ Sutter said in his book “747’’. “The futuristic flying machines I sketched as a boy would carry passengers in safety and comfort to the far continents, conquering oceans in a single flight. Little did I know I would grow up to realize these dreams.’’

READ Jumbo’s crazy and not so crazy interiors.

A graduate of the University of Washington, Sutter started at the Boeing plant after serving in the US in Navy World War II and was courted by both Boeing and the Douglas Aircraft Company after the end of the war.

He initially accepted the higher Douglas offer but took what he thought was a short-term job with Boeing while his wife delivered the couple’s first child.

That job with Boeing’s small aerodynamic group working on the piston-powered Stratocruiser would be the start of a long and illustrious career that would see him work on many of the airline’s early jets.

“He personified the ingenuity and passion for excellence that made Boeing airplanes synonymous with quality the world over,’’ then Boeing Commercial Airplanes President Ray Conner said in a tribute sent when Sutter died in 2016.

“Early in Joe’s career, he had a hand in many iconic commercial airplane projects, including the Dash 80, its cousin the 707 and the 737.  But it was the 747 – the world’s first jumbo jet – that secured his place in history.

Joe led the engineering team that developed the 747 in the mid-1960s, opening up affordable international travel and helping connect the world.

“His team, along with thousands of other Boeing employees involved in the project, became known as the Incredibles for producing what was then the world’s largest airplane in record time – 29 months from conception to rollout.

It remains a staggering achievement and a testament to Joe’s “incredible” determination.”

At the time Sutter was designing what would become the jumbo jet,  the world was looking to supersonic travel with the Boeing SST and the Concorde as the future in aviation.

Giving life to the plane that changed the world was a challenge that brought Boeing, the world’s biggest aerospace company, the then-biggest engine maker Pratt and Whitney and the legendary Pan Am to their knees.

And while the speed with which the 747 was rolled out may be the stuff of legends, it was the one thing Sutter would have like to have changed,

He speculated the timetable was because of the closeness to the retirement of two legendary aviation figures: Pan-Am’s Juan Trippe and Boeing’s Bill Allen.

The two wanted the 747 completed in two-thirds the time ordinarily taken to develop an all-new jet and delivered by the end of 1969.

This put Sutter’s group under tremendous pressure but they rose to the challenge.

“In all my years at Boeing, I’ve never met a gang that pulled together as well as my 747 team,’’ he later recalled.

“We seemed to have the same can-do attitude that was even then putting Americans on the  moon.”

Not that the journey was without turbulence.

Pan-Am had originally asked for a double-decker plane but it’s management eventually accepted, after some persuasion, what was essentially a single deck plane whose cabin was twice as wide as any airliner that had ever flown.

Engines were also a problem for the 747 and Sutter was forced to head off lobbying for an unsuitable General Electric engine in favor of a more suitable powerplant from Pratt & Whitney.

Pratt’s JT9D engine was its first attempt at a high-bypass-ratio turbofan engine and was not without problems that included engine failures and surges.

There were also issues with the wing loading, eventually solved by twisting outer wings in what became known as the Sutter twist.

When the first 747, R A0001,  rolled out on a cold and overcast day in September 1968, it made global news and the crowd attending the vent gasped audibly and broke out in spontaneous applause.

“More important,” Sutter said in his book. “A  whole lot of bankers felt vastly relieved to see in the papers and on TV that Boeing had a real airplane to show for all that money we’d borrowed from them.

“In fact, this was the entire point of the rollout, which otherwise decidedly premature. Oh, our jumbo jet might have looked ready to leap into the sky but in reality, it was only 78 percent finished.’’

Boeing had wanted the aircraft to fly on December 17, 1968, to make the 65th birthday of the Wright brothers’ flight at Kitty Hawk in North Carolina.

That first flight would come on February 9, 1969, and Sutter described his quiet elation on the day.

“In a few moments now, on an airfield 30 miles north of where I grew up dreaming of designing airplanes, we’d see whether all those pieces added up to a real flying machine.’’

As the plane took to the skies and performed a shallow turn, Sutter found himself unable to say anything.

Despite reassurances the plane was “flying beautifully’, it was not until it descended to the runway “with the stately majesty of an ocean liner”, flared gently and touched down smoothly that Sutter relaxed.

“That moment was the biggest thrill of the day,” he said. “All my worries evaporated and I knew we had a good airplane. I took a grateful breath, happy to  the core of my being.”

Throughout all this, one thing Sutter was never prepared to compromise was safety.

Innovations included a decision to take redundancy on the 747 to new levels with arrangements such as four separate and independent hydraulic systems.

The most comprehensive certification program performed to that time kept five 747 test aircraft flying seven days a week over 10 months of flight testing.

“My team and I would be introducing the biggest airplane in the world,’’ Sutter said in his book. “Here was also our chance to make it the safest.’’

The jumbo jet would become the Queen of the Skies, selling more than 1500 units and still in production today.

Sutter was always was modest about his role. “I was the only qualified person available,” he said in a 2009 interview with AirlineRatings. “All the smart guys — Maynard Pennell, Bill Cook, Bob Withington, and many others — were tied up on the SST while Jack Steiner was heading the 737 program.”

The 747 was from the outset designed to be converted to a freighter as the superseded model was relegated to cargo routes. “That’s what Boeing’s marketing people thought,” Sutter said. “They estimated we’d probably sell 50 or so for passenger use.”

Sutter remained active with Boeing long after his retirement and continued to serve as a consultant as well as an ambassador for the company.

“By then his hair was white and he moved a little slower, but he always had a twinkle in his eye, a sharp mind and an unwavering devotion to aerospace innovation and The Boeing Company,’’ Conner said in his tribute.