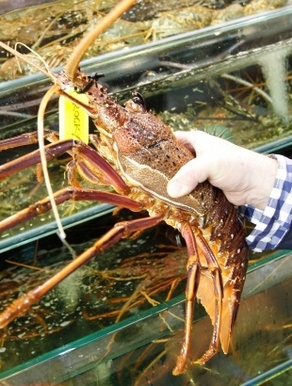 Bobbing on the blue waters of the Indian Ocean off the WA coast before sunrise, fisherman Brent Thompson and his crew are pulling up their pots containing their latest haul of rock lobster. The ocean off Cervantes feels like a world away from the hustle and bustle of Perth international airport and the world’s multibillion-dollar air cargo business.

But these small red crustaceans are a highly prized delicacy worldwide and make up a crucial part of WA’s airfreight export market. WA rock lobsters are exported live globally in a quick and efficient operation that delivers them to their foreign destinations fresh.

To find out how this impressive process works, The West Australian and Channel 7’s Today Tonight followed one WA rock lobster, named Rocky, on its journey from a Cervantes lobster pot to a Hong Kong restaurant dinner plate. The lengths taken to ensure Rocky’s safe arrival illustrates the value of WA’s $183 million rock lobster industry, much of which is imported live to China and South-East Asia and cooked to Europe.

Rocky’s journey also shows how air cargo is just as important – if not more so – as passengers to airlines. Without cargo in the bellies of planes, passenger airfares would increase by up to 20 per cent and many flight routes would be unsustainable.

Brent Thompson followed his father Dave Thompson, who owns the Indian Ocean Rock Lobster company in the town, and his grandfather Dave Thompson Sr into lobster fishing. Since becoming a skipper four years ago, the 26-year-old has watched his industry go through upheaval, largely because of the introduction of a catch limit on the fishery designed to protect the rock lobster population, which was hit by lowest-ever breeding levels in 2008. But fishermen can now pull pots all year round after the State Government abolished the seven-month season last month.

Some rock lobsters are cooked before export by steaming for 45 minutes. A consignment being prepared to be flown to Paris, has to arrive in France at a temperature of between minus one and 4C, otherwise French officials send the cargo back to Cervantes.

The rock lobsters, including Rocky, destined for live export are stunned in chilled saltwater, between 6C and 9C, for up to five minutes to put them into a deep sleep for their flight. “We find, comfortably, they’ll do 24 hours pushing it out to about 30 hours in that condition,” Dave Thompson said. “Any longer, you start to get high mortality. Also if they wake up midstream, they tend to get agitated and they lose their limbs.”

Once stunned, the lobsters are packed in sawdust-lined eskies and before long they begin their 240km journey to Perth international airport and air freight travel agent Worldlink’s depot, which handles up to 18 tonnes of live lobsters daily. Worldlink director David Wilkins said many airlines flying out of Perth relied on the live lobster trade for their cargo revenue. “Air cargo is very, very important to airlines, particularly out of Perth,” he said. “You’ll find that a lot of airlines have scheduled their aircraft movements in and out of Perth to coincide with the availability of cargo.”

More than 40 per cent of world trade by value is carried in passenger or freight planes each year. It adds up to a staggering 50 million tonnes of cargo worth more than $5 trillion. As passengers board a midnight Cathay Pacific flight at Perth international airport, Rocky and his mates are being loaded into the belly of the aircraft for the seven-hour, 6,000km journey to Hong Kong.

The next morning, seafood importer Wilson Yuen takes carriage of his latest live delivery and unpacks Rocky and the other lobsters. Wriggling and kicking, the lobsters are well awake as they are put into the tanks at his seafood market shop. “In Chinese tradition, we like to eat fresh seafood, live seafood. We don’t want to see something frozen. It has no value, you know, in the market,” Mr Yuen explains. It is early evening in Hong Kong and the seafood market comes alive with people who come out to buy their dinner, as fresh as if it had just been plucked out of the Indian Ocean.

Rob Broadfield, The West Australian‘s food editor, joined Rocky’s journey to Hong Kong, ending when the chef-cum-critic cooked the well-travelled lobster in a wok with ginger, garlic and soy, helped by a Hong Kong restaurant chef. “Because it was fresh, it tasted extraordinary and the light cooking the Chinese like just allowed all the flavours to sing,” Broadfield said.