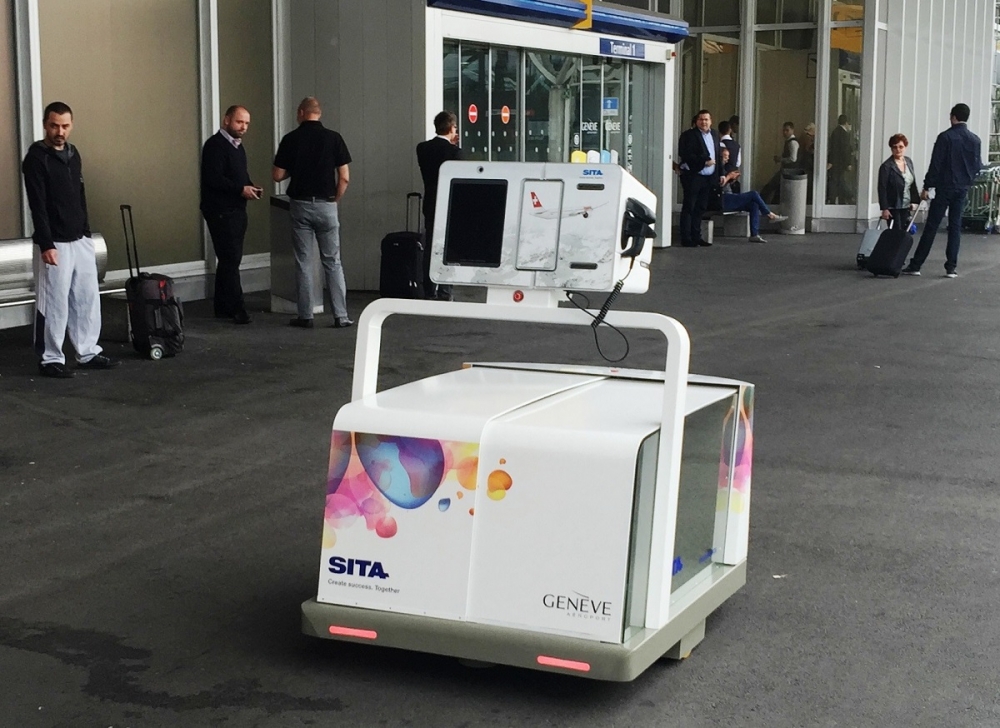 It may not be The Terminator but Leo the baggage handling robot is the latest piece of technology to invade airports with the aim of exterminating annoying hassles.

The fully autonomous, self-propelled baggage robot from global technology giant SITA is in Singapore this week showing off its ability to help passengers to avoid lengthy baggage queues as part of a tour of Asia.

The tour follows successful trials of the robot earlier this year at  following successful tests at Geneva Airport.

Watch a video of Leo in action.

Named after Italian Renaissance inventor and artist Leonardo da Vinci, the robot can check in, print bag tags and transport up to two suitcases with a maximum weight of 32kg. It can avoid obstacles and navigate high traffic environments such as airports.

Leo approaches passengers as they head towards the terminal building, allowing them to sidestep luggage queues. It uses SITA’s Scan&Fly bag drop interface to allow them to load luggage in a secure compartment, scan their boarding pass and print tags.

Once the bags are tagged, Leo secures them, displays the boarding gate and departure time and takes the bags directly to baggage handling for sorting and transfer to the correct flight.

SITA believes the robot provides a glimpse of the future use of robotics in airports to further streamline the baggage handling process.

“Using robotics and artificial intelligence, Leo demonstrates how bags can be collected, checked in, transported and loaded onto the correct flight without ever having to enter the terminal building or be directly handled by anyone other than the passengers themselves,’’ said SITA Asia-Pacific president Ilya Gutin.

After an appearance at this week’s Future Travel Experience Asia EXPO 2016 in Singapore, Leo is off to Hong Kong International Airport to strut its stuff.

It is one of several robots to make an appearance at airports this year as technology companies investigate cybernetic possibilities in the aviation environment.

Amsterdam Schiphol airport and KLM successfully performed tests where the first socially-aware robot that has ever been deployed at an airport, ‘Spencer’  (Social situation-aware PErceptioN and action for CognitivE Robots), helped  to guide passengers to their gate.

Terrorists in China are also facing a new nemesis with a cattle-prod wielding “robo-cop’’ patrolling Shenzen Boa’am International Airport in the southern province of Guangdong.