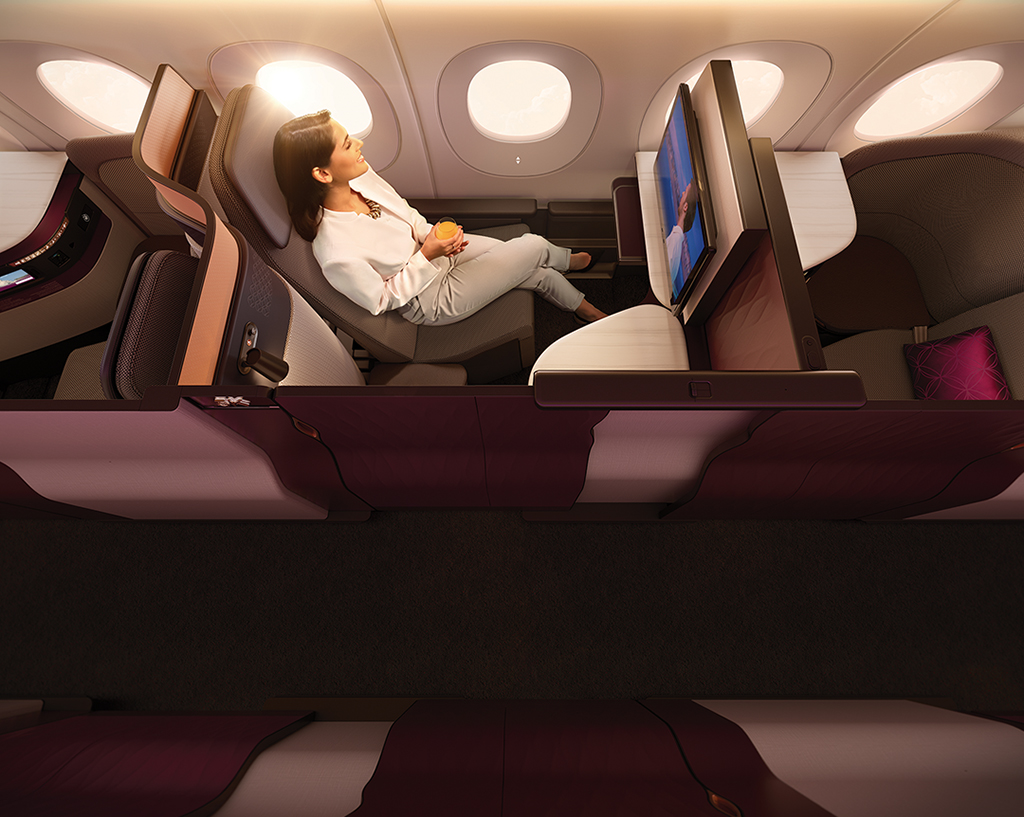 In passenger comfort, there are milestones that redefine the industry and take it on a new flight path and Qatar Airways’ Qsuite has been such a major turning point.

Then there were evolutionary not revolutionary changes with business class seats morphing into sloping beds then finally flatbeds. Next, the flatbeds in sets of two went through another change emerging as a single cocoon in various shapes.

Qatar Airways’ Qsuite was three years in development and has brought a new level of luxury to Business Class.

Qsuite is a revolution, not an evolution because business class turns into First-Class and redefines the expectations of business travelers.

Passengers have the flexibility to transform their space from a private suite to a social area with “paired rear and forward-facing suites”, which take cabin innovation to an entirely new level.

The interior is designed with the airline’s signature colors of burgundy and grey, enhanced with elegant and warm rose gold detailing which drip opulence and class.

A media panel comes with an all-access power port, with USB, HDMI and NFC capabilities for passenger convenience.

But the main event is the sliding door, although there is plenty of privacy with it open because the Qsuite is offset with the one across the aisle.

However, with the door closed you have the additional separation from other passengers, a consideration in this COVID world.

The door is simple to operate, although there are instructions for its removal in an emergency.

For total privacy, you just need to press the DND button and the flight attendant will leave you in peace.

And talking of peace the flatbed is excellent and ensures good sleep. You get two pillows – large and small – plus a cozy blanket.

For long-haul night flights and all ultra-long-haul flights, there is a bespoke turndown service complete with pillows, a quilted mattress, duvet, slippers, and sleepwear to further enhance passengers’ quality of sleep.

For those who find sleep a bit of a challenge or those who just want to catch up on all those must-see movies, Qatar Airways’ In-Flight Entertainment. Qatar Airways has more than 4,000 options all told with over 300 movies and the content is high-resolution.

The Qsuite is dominated by a giant, 21.5-inch high-definition touch screen that is both crisp and responsive.

Control is a touch screen or via a controller and a neat feature is the moving map which can be placed in a picture-in-picture window so you can keep an eye on a feature that may be coming up that you want to photograph.

The system is simple and intuitive when using the touchscreen to navigate the big selection of games, music, and information and there are also outside cameras that can be selected.

Qatar Airways has also rolled out “Super Wi-Fi”’ that can reach speeds topping 50 megabits per second, a feat that would make it better than many homes’ broadband services.

The Qsuite is available on the Boeing 777 and Airbus A350 aircraft.

Not surprisingly the Qsuite has won over the judges at Skytrax and AirlineRatings.com – the world’s leading rating agencies.

AirlineRatings.com voted the Qsuite the Best Business Class every year since it was introduced and voted Qatar Airways the World’s Best Airline for 2021.

Qatar Airways has also won multiple awards for its in-flight service and catering from both Skytrax and Airlineratings.com.

Very important in this COVID-19 era passengers booking with Qatar Airways have guaranteed booking flexibility while Qatar Airways was the first airline and hub airport to gain Skytrax’s 5-Star ratings for COVID-19 safety.