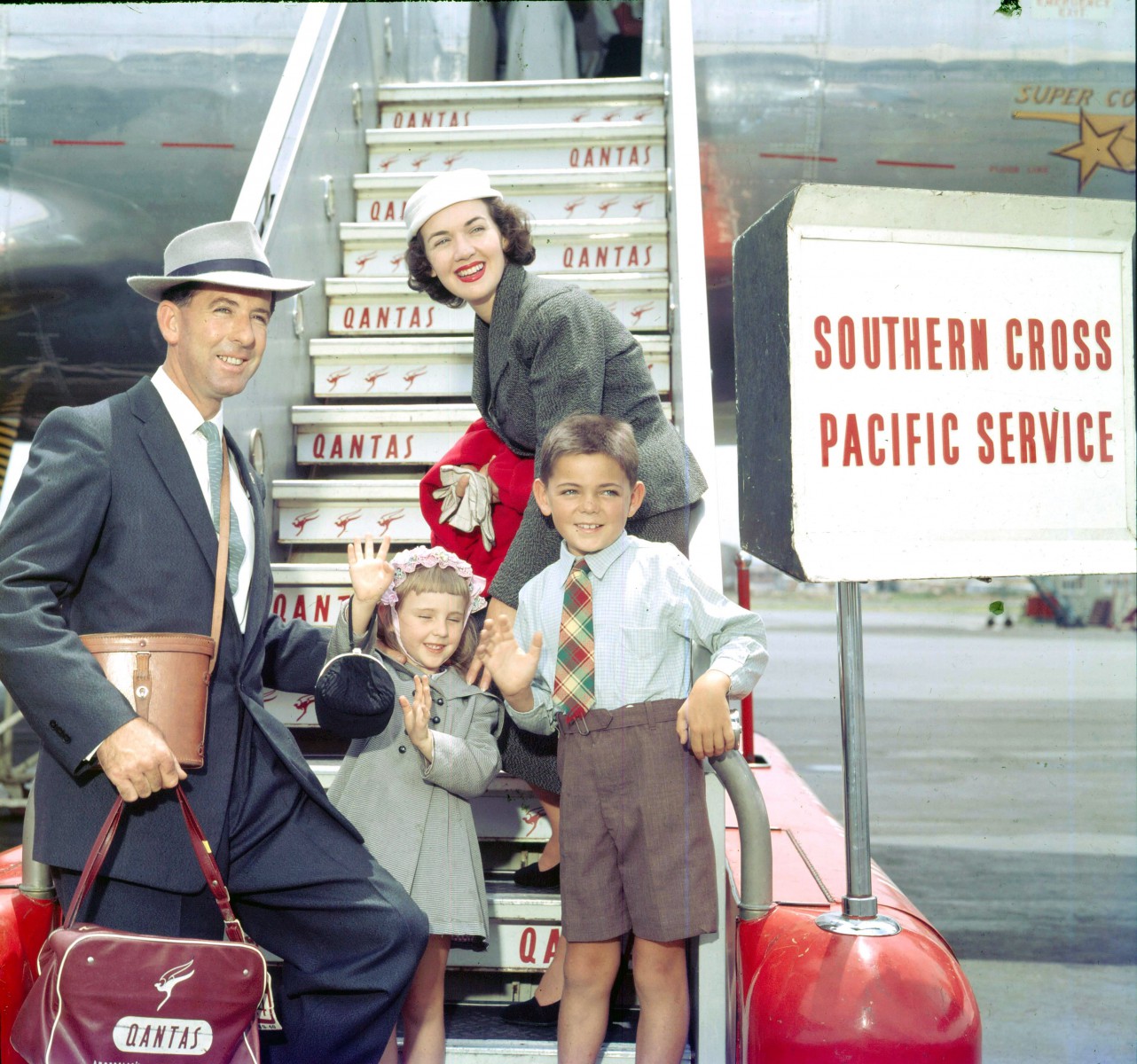 Above is a delightful family photo of boarding a Lockheed Constellation in the 1950s and below is that aircraft.

This is the Super Constellation fitted with weather radar.

Qantas then upgraded to the larger more powerful Boeing 707-338.

Economy class on a Boeing 747.

Qantas is the oldest continuously operating airline in the world and began life in outback Queensland on November 16, 1920, as the Queensland and Northern Territory Aerial Services.

It was formed by Australian Flying Corps veterans Hudson Fysh and Paul McGinness together with grazier Fergus McMaster just 17 years after the first powered flight by the Wright Brothers, two years after the end of World War One and at the tail end of the last major global pandemic, the Spanish Flu.

The new airline focused on conquering the “tyranny of distance” that was a major barrier to the growth of modern Australia. Its early chances of success were uncertain, to the point early backers called their investment “a donation”.

But Qantas persisted with charter flights across Queensland and the Northern Territory and began its first scheduled flights in 1922 as a mail service that carried some passengers.

By 1926, Qantas was the only airline in the world to be operating, building and maintaining its own aircraft and in 1928, the Royal Flying Doctors Service was launched using Qantas aircraft.

A major leap came when Qantas spreads its wings overseas in the 1930s in partnership with British Airways forerunner Imperial Airways.

By 1938, Qantas was operating flying boats to Singapore using Sydney’s famous harbour as the city’s first international airport. Comedian and film legend Charlie Chaplin was one of its early international travellers.

Advances in aircraft technology saw Qantas break new boundaries and by 1942 it was operating 30-hour flights over the Indian Ocean to Ceylon using Catalina Flying Boats to maintain a link with Britain. Pilots on the service saw the sunrise twice, earning them “The Secret Order of the Double Sunrise”.

By the end of the 1940s, its strategic importance saw it nationalized and the 1950s saw it flying Super Constellations around the world.

Australia’s flag carrier was an early adopter of the new Boeing 707 passenger jets and in 1959, the airline operated the first transpacific jet service between Sydney to San Franciso via Fiji and Hawaii.

Qantas continued to connect Australians to the world through the 1960s and in the early 1970s introduced an aircraft that would come to define it for the rest of the century: The Boeing 747.

It would go on to operate almost every 747 variant and demand developments that would extend the plane’s range.

The 747 reduced the cost of flying overseas and opened up international travel to the average Australian.