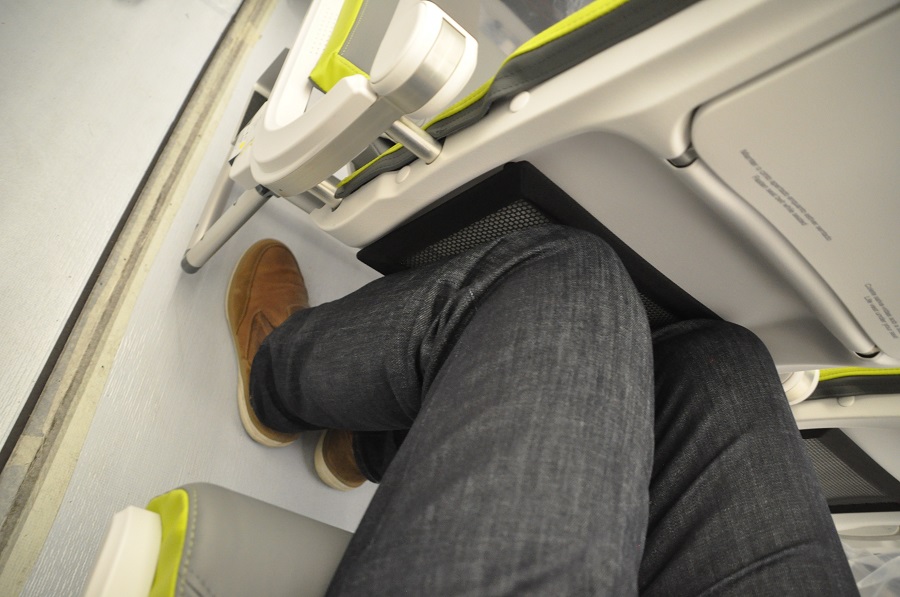 TAP Air Portugal is celebrating its  70th anniversary by renewing its aircraft interiors in  a revamp that is seeing more product differentiation and a  tightening seat pitch on short-haul economy flights.

The first of TAP’s 21 Airbus A319 planes, which have an average age of 17.4 years, to get the refit are already back in service with new cabins, despite a 17.4-year average age, and the whole A320-family fleet will be converted by July next year.

“This is the biggest revamp in TAP’s product history,’’ cabin Interiors product manager Joel Fragata tells AirlineRatings, “This is mostly about efficiency gains, to be able to compete in today’s market.”

TAP’s economy class has to mirror the offerings and fares of  the low-cost carriers which have become a strong presence in Portugal. It has adapted by introducing  a  “discount” fare  which includes just one cabin bag.

At the same time, however, it has to offer business travellers, especially those connecting on to long-haul in Lisbon, a suitable product.

The current fare spectrum is illustrated on a randomly picked flight from Heathrow to Lisbon, where an online survey yields ticket prices varying from â‚¤52 ($US66) to â‚¤238 one way.
This is one reason TAP  is differentiating its offerings more and tightening seat pitches in the back of the plane

. “We are achieving several goals at once with the revamp — increasing the seat count, lowering  the total weight of the aircraft by 700 kilos and thus (getting) lower fuel burn, and still offering  more comfort to many customers”, says Fragata.

This is partly due to thinner seatbacks and partly to the removal of a galley in the front of the plane.

But it also means economy class, recognisable by green seats aft of  the over-wing emergency exits,  now  has a  tight 28-inch ’ (71.1cm) pitch, making it even more uncomfortable than the aft rows of Lufthansa’s A320neos.

TAP doesn’t allow any recline at all, while Lufthansa’s seatbacks move a few millimetres.  In airline speak, this is called “pre-reclined” mode, a nonsense at this minimal pitch. and anybody taller than 175cms (5ft 9in) suffers in these seats.

The best option for economy travellers is  the first  “green” row — row 11 in the A319 —boasting a generous 33’’ pitch, to compensate for the four-inch recline of the “premium” seats ahead of it.

It is a different feel at the front end of the plane.

The first ten rows of the A319 are equipped with business class seats, easily recognizable by their red leather edges, the middle seat remains free and has a table.

Here the pitch is 33 inches  (83.8cm), every three seats have a power outlet for electricity (110V) as well as a USB port, something still rarely found on short- and medium-haul.

TAP plans to offer an “Economy Plus” product in some “red” rows and have it system wide next year.

On long-haul, the two newest A330-200s, registered CS-TOS and CS-TOT, already have seven rows in the front of Economy boasting a 34-inch  pitch,  which will soon n be sold as “Economy Plus”.

Starting in January, seven of 16 TAP A330-200s will be refurbished in a program expected to be completed by October.

Business class will get fully-flat seats for the first time, a newer model of the Thompson Vantage seat,  to replace the increasingly unacceptable angled lie-flat that are  no longer acceptable to many passengers.

But it will be 2019 before TAP expects to have lie-flat seats across all its aircraft and a real relaunch is not expected until newly ordered aircraft arrive.

A year later, the first batch of a total of 39 A320neos-A321neos will follow.  These will include the long haul version A321LRs, which TAP intends to operate on shorter Brazilian  routes  and which will also have fully-flat business seats.