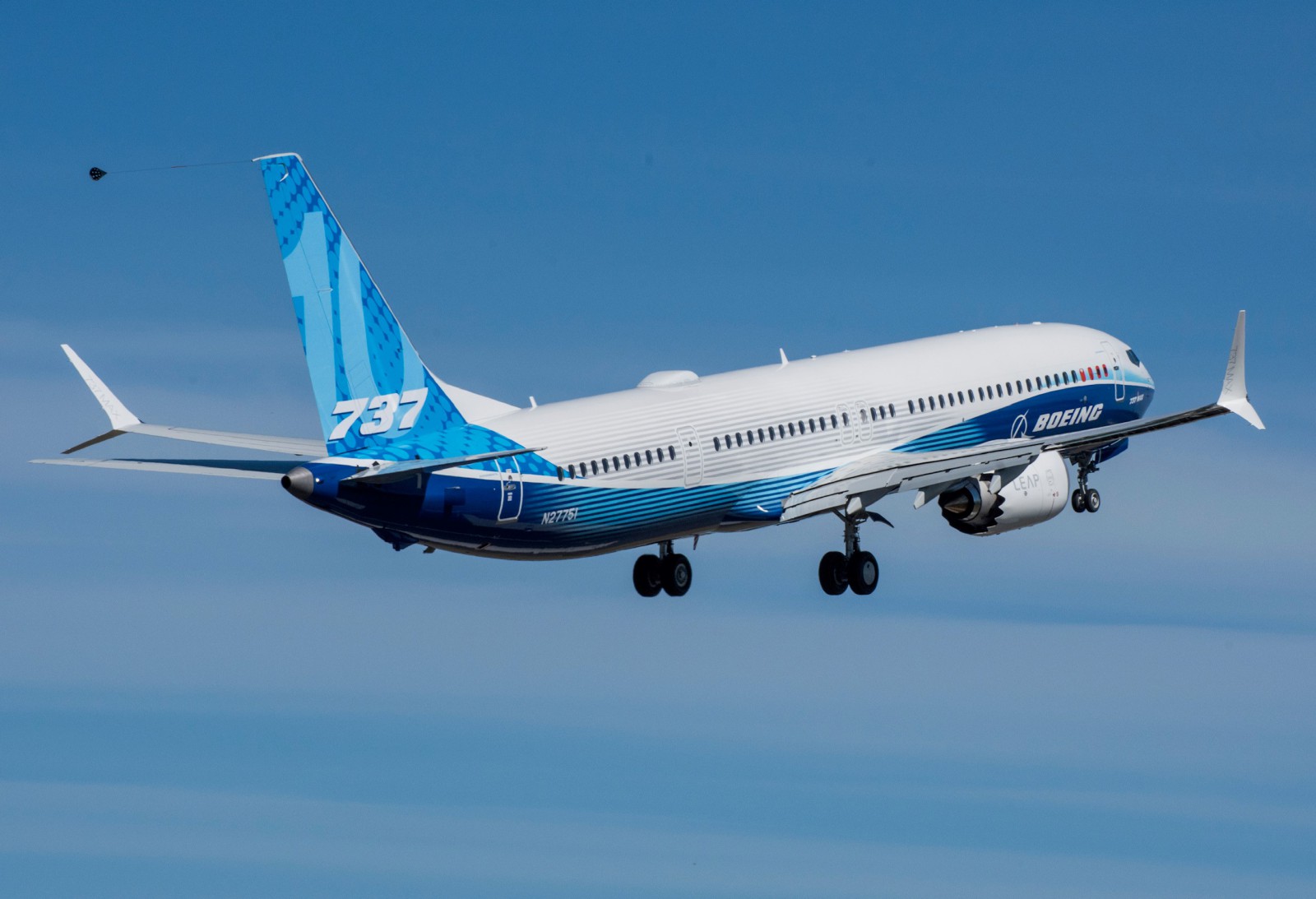 A pilot’s 737 MAX suit has been tossed out after an Illinois federal judge said Monday that pilots have overreached both in their bid to recover damages for their purportedly diminished careers by claiming Boeing duped the international aviation community about the 737 Max jets, and in their repeat attempt to have the judge recuse himself from the case.

U.S. District Judge Steven C. Seeger dismantled the pilots’ consolidated proposed class action alleging their careers were sidelined when The Boeing Co.’s 737 Max jets were grounded globally for 20 months after two deadly crashes, saying it was a textbook case of how a theory of liability can stretch the chain of causation too far. Separately on Monday, Judge Seeger also flatly rejected the pilots’ second bid to have him recuse himself from the case, calling their suggestion that he couldn’t remain impartial just because he used to work for the U.S. Securities and Exchange Commission and Kirkland & Ellis LLP “way off base.”

“Plaintiffs allege that Boeing designed a defective plane, which led to crashes, which led governments and airlines to ground the Max fleet, which led to a loss of job opportunities, which led to a loss of income for the pilots,” Judge Seeger said in a blistering 53-page ruling granting Boeing’s motion to dismiss. “Typically, damages do not ‘go beyond the first step.’ But here, plaintiffs put forward a theory with a hop, a skip, and a jump, and then some. Liability is a bridge too far.”

The group of international pilots — who have accused Boeing of strict product liability, negligence, fraudulent concealment and fraudulent misrepresentation — were certified or type-rated to fly 737 Max jets. They alleged that they were left with diminished careers and lost income after regulators grounded the 737 Max following the October 2018 crash of Lion Air Flight 610 in the Java Sea that killed 189 people and the March 2019 crash of Ethiopian Airlines Flight 302 that killed 157 people.

Judge Seeger ripped the pilots for “attempting to capitalize on two plane crashes experienced by other people.”

“Unlike the poor people on those planes, plaintiffs had everything, and they lost nothing,” the judge said. “Stretching causation to cover people who weren’t on the planes would expand the boundaries of liability much too far. It is foreseeable that a defective plane might not fly. And it is natural to think that a defective design might cause accidents. But when you think about a defective plane, and the problems that could ensue, lost income by people who don’t crash probably isn’t at the top of the list.”

Judge Seeger also said the pilots’ all-consuming and seemingly endless theory of liability would wreak havoc on the litigation landscape, saying that “sometimes bad things happen to other people, and it affects you too, in a roundabout, indirect, downstream way. That’s life. That’s not a claim.”

Furthermore, the pilots’ bid to recover compensation for lost flying time, wages, and the emotional injuries they allegedly suffered in the wake of their professional upheaval is a “nonstarter” under Illinois law because the economic loss doctrine bars their strict liability and negligence claims, according to the ruling.

The pilots’ fraudulent concealment and fraudulent misrepresentation claims also hit a wall. The judge agreed with Boeing that it didn’t have any “special relationship” with the pilots that would create a duty to disclose information about the safe operation of the Max, and that the pilots couldn’t pinpoint any Boeing statements or omissions in operating manuals, pilot bulletins or training materials that influenced their decision to get certified on the Max.

“Anyone attending a training had already made the decision to seek certification. So, information at the training did not lead anyone to decide to take the training. They were already there,” Judge Seeger said. “The failure to tell plaintiffs how to fly the planes safely did not cause them to suffer an injury, either. … Plaintiffs never experienced an emergency. And they never crashed. No harm, no foul, no claim.”

The pilots, who fly for airlines such as Air Canada, Norwegian Air, Lion Air, Jet Airways and other international carriers, kicked off the litigation in July 2019. They accused Boeing of “callous” and “contemptuous manipulation” of the 737 Max’s development and certification.

The 737 Max jets were outfitted with a unique automated feature called the Maneuvering Characteristics Augmentation System, which affected the plane’s flight control system. Accident investigators and other official review panels have since determined that the MCAS was vulnerable to faulty sensor readings that could inadvertently trigger the system and push the plane to nosedive. Investigators also determined that Boeing miscalculated how much time pilots might need to respond to cockpit alerts, meaning the system was designed in a manner that gave pilots only seconds to react if the MCAS were unexpectedly activated.

The pilots maintained in court filings that Boeing’s webpage dedicated to recruiting pilots for 737 Max certification, the computer-based training sessions that they underwent and the more than 1,500-page flight crew operations manual for the 737 Max neglected to even mention the MCAS feature, let alone that it could malfunction and trigger the plane to nosedive.

That meant pilots were left completely in the dark about a faulty feature that could impede their ability to safely fly the planes, they said. Moreover, the pilots who specifically trained to fly the 737 Max had to waste additional time retraining to fly other planes after the catastrophic crashes, according to court documents.

Monday’s dismissal order comes shortly after the pilots again raised questions of impropriety and judicial bias by moving to have Judge Seeger bumped from the case. The pilots in 2020 unsuccessfully sought to have Judge Seeger recuse himself, given his previous tenure more than a decade earlier as a partner with Kirkland & Ellis LLP, the firm that’s defending Boeing in this dispute, as well as numerous other cases and investigations related to the 737 Max.

The pilots said the judge was a former senior trial counsel with the SEC right before he was confirmed to the U.S. District Court for the Northern District of Illinois in September 2019 — a period during which the SEC was investigating Boeing for its misrepresentations about the 737 Max jet’s overall safety.

The SEC announced in September that Boeing had agreed to pay $200 million to settle allegations it misled investors about the 737 Max jet’s safety, while Boeing’s former chief executive, Dennis A. Muilenburg, agreed to shell out $1 million for misrepresentations that he made.

Judge Seeger on Monday called the pilots’ latest recusal bid baseless, stating that he didn’t work on any Boeing matters while at the SEC, and didn’t do any work on any SEC investigation involving the Boeing 737 Max. Moreover, this particular case has nothing to do with the SEC, he said.

“Do plaintiffs really think that this court would be biased in favor of Boeing if this court had investigated Boeing? Is plaintiffs’ theory that this court is biased in favor of Boeing because it used to work for an agency that charged Boeing?” Judge Seeger asked. “The SEC didn’t exactly give Boeing a clean bill of health, so it is hard to see how simply working for the SEC could create positive momentum for Boeing. Taking a step back, the motion is plaintiffs’ latest effort in their long-running attempt to go on a judge shopping spree.”

“This court can’t help but think that plaintiffs are playing a game of heads-I-win, tails-you-lose,” Judge Seeger continued. “But judicial recusal is not a game, and this court will not play along.”

Patrick M. Jones of PMJ PLLC and Joseph C. Wheeler of International Aerospace Law & Policy Group, co-counsel for the pilots, told Law360 on Monday that they intend to appeal.

“The plaintiffs never had a chance in these cases,” Jones said. “At the initial status hearing in this case, Judge Seeger confided that he hadn’t read the complaint, but commented that this case seemed to be about ‘pilots being afraid to fly.’ That is not what this case is about and never was.”

Jones said this is a basic fraudulent misrepresentation case — for conduct that Boeing has already admitted to in many forums.

“Boeing lied directly to those pilots when it lobbied them to tie their careers to the Boeing 737 Max, which Boeing knew was uncertifiable,” Jones said. “Boeing, car manufacturers, pharmaceutical companies, etc., should be subject to the same laws as everyone else. They are not ‘too big’ to be held liable for their actions.”

Wheeler said Judge Seeger’s comments throughout the ruling underscored his “obvious bias” against the plaintiffs.

“He is no expert at aeronautical engineering yet clearly presumes to be; and overlooks the inherent design flaw in the Max, the reason it was selected and ramifications that had in human life and, albeit to a lesser extent, the effects it had on our clients’ lives and livelihoods too,” Wheeler said. “This cannot be the view of a reasonable judge and is the style of dealing with plaintiffs that will underscore the impending appeal.”