Seats to Suit Your Back? 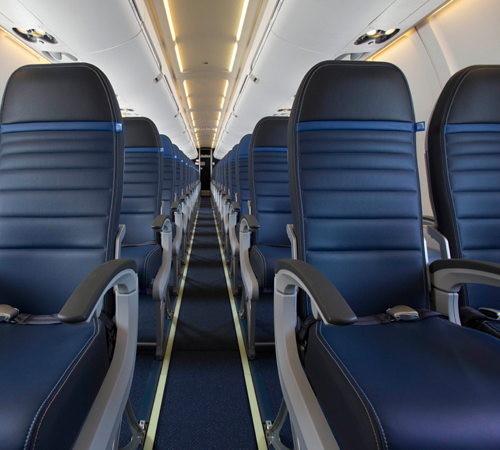 United Airlines’ is deploying a slew of new ergonomically-attuned seats for Economy and Economy Plus on hundreds of aircraft serving the United States, Canada, Central America and the Caribbean.

And it’s not just full-size craft that are set to get them. The new seat type made its debut on a United Express CRJ700 operated by SkyWest.

All of this comes in a package that the carrier touts as more environmentally friendly – this because the seat-sets weigh less. That translates into less fuel burn.

Developed in conjunction with the travel and transport design consultant Priestmangoode, United ultimately plans to deploy some 60,000 of the new seats, installing them on more than 500 aircraft.

Gatwick Spotters has produced a stunning video of aircraft landing in fog conditions which demonstrates the capability of what is termed CAT 111B autoland. (See below)

Autoland was pioneered by the British and the first aircraft to perform an autoland to what is termed CAT 11 level was a Trident jet on February 7 1968.

The UK government started investigation into autoland with its Blind Landing Experimental Unit (BLEU) which was set up in 1945. British European Airways was heavily involved in the development for its Hawker Siddeley Trident fleet in the late 1950s.

The first aircraft to be certified to the full CAT III standard, on December 28, 1968, was in fact the Sud Aviation Caravelle.

There are several levels of autoland depending upon equipment both in the aircraft and on the ground. Depending upon the capability the distance pilots must be able to see the runway from a vertical and horizontal distance varies considerably. 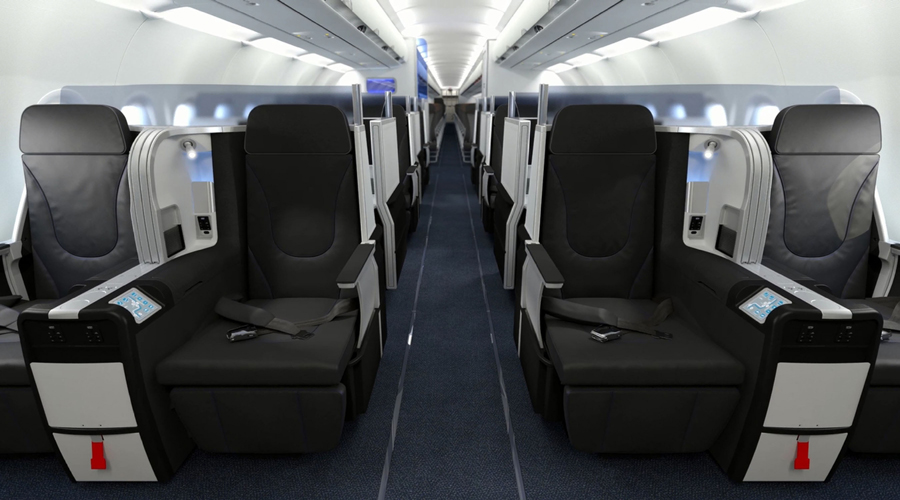 A few weeks back we told you JetBlue would be rolling out new U.S. transcontinental premium passage beginning next summer. Let’s flesh out the amenities the low-fare/high-frills carrier will be offering up front, in the pointy end of its new A321s as of June 2014.

The effort is dubbed Mint, and the seat is the center of it all – the sine qua non around which the effort revolves. It’s a fully lie-flat 6′ 8″ affair, one that JetBlue claims is “the longest in the U.S. domestic business class market.” At 22.3″ wide, the carrier also contends it’s the widest in that category. The seat is fitted with adjustable air cushions, has a massage function, comes with dual 110 volt power outlets and a pair of USB ports and is fronted by a 15-inch flat screen monitor delivering 100 channels of DirecTV.

Then there’s the food, glorious food. Prep for the airborne repast with a pre-departure drink. If you’re in the mood, follow it up with a cocktail and amuse-bouche once aloft. Then comes the main course, one curated by Saxon + Parole, a popular New York City eatery. No mere chicken, beef or fish triad here. JetBlue wants you to “customize” your meal by choosing from among five “comfort food with a twist” offerings. They’re served tapas-style. Desert follows, along with a cappuccino or espresso.

The most mouth-watering part of the whole equation is the airfare. It starts at $599, one-way. JetBlue’s premium pitch is that your wallet too will arrive on the other end of the continent in comparatively Mint condition.

JetBlue’s betting that rate is going to help it rake in a larger share of the hugely competitive U.S. transcon premium market, a market heretofore in which it’s competed with six-abreast A320s configured, in part, to offer more leg-room. The arrival of Mint to the market signals JetBlue means business. It will be fascinating to see how the move affects the competition.

Shuttle service may have lost some of its luster since the heyday of the fabled Eastern Shuttle, which once linked New York LaGuardia to both Washington National and Boston Logan. Once-upon-a-time, the high and the mighty made the trip, high-profile people from politics, media and the business world. It wasn’t uncommon to find yourself sitting next to a network television anchor absorbed in their script for the evening news.

Nowadays shuttle service is, perhaps, a bit less lustrous, more taken for granted. Still, the convenience of predictable, practical air passage when you want it most hasn’t lost its intrinsic appeal. Far better to be cruising at 30,000 feet as the traffic winds below on Interstate 5 than be down there battling it out with deranged drivers.

Turn-on-a-dime business travelers who demand flexibility should find the flights useful You can check in as late as 30 minutes prior to departure, and do so at dedicated check-in counters. The Shuttle gates are close to security. And there’s in-flight Wi-Fi.

Amenities? How about free copies of The Wall Street Journal, the Financial Times and such.

SkyMiles members will rack up at least 500 miles for the Shuttle sojourn.

How does 1.6 million euros worth of gold bars go missing on a plane?

According to news.com.au, Air France says it has filed a complaint after gold bars worth about 1.6 million euros ($A2.2 million) were stolen from a plane bound for Zurich from Paris.

“We hope the investigations will allow us to quickly determine the sequence of events and identify those responsible,” a spokesman said.

The gold bars, weighing about 50kg, were placed inside the plane at Paris’s Charles-de-Gaulle airport last Thursday by employees of the US security firm Brink’s.

It is as yet unclear how the theft happened, but an airport source said the robbers had ‘probably made use of airport accomplices’.

This kind of shipment takes place every day, and Brink’s employees always stay on the tarmac until the plane takes off.

According to Airbus’ latest Global Market Forecast (GMF), air traffic will grow at 4.7 per cent annually over the next 20 years requiring more than 29,220 new passenger and freighter aircraft.

The total of aircraft will be valued at nearly US$4.4 trillion.

Economic growth, growing middle classes, affordability, ease of travel, urbanisation, tourism, and migration are some factors adding to the required increase to the fleet.

Increasing urbanisation will lead to a doubling of mega cities from 42 today to 89 by 2032, and 99 per cent of the world’s long-haul traffic will be between or through these.

A focus on sustainable growth enabled fuel burn and noise reductions of at least 70 per cent in the last 40 years and this trend continues with innovations like the A320neo, the A320 Sharklet, the A380 and the A350 XWB.

“By 2032, Asia-Pacific will lead the world in traffic overtaking Europe and North America.

Domestic flights are also set to rise strongly with domestic India growing at the fastest rate (nearly 10 per cent), followed by China and Brazil (seven per cent).

Perth to Melbourne Flight Options for the 2013 Grand Final

Flights with Tigerair and Jetstar are basic cost only. Baggage and food will be extra.

Prices correct as on Sunday 22 at noon.

The loss of separation incident involving two Qantas A330s near Adelaide Australia on Friday September 19 serves to highlight the multiple levels of safety built into the airline industry today.

Qantas Flt 576 was heading from Perth to Sydney at 39,000ft when the Airbus A330’s pilots received an alert from the aircarft’s Traffic Collision Avoidance System (TCAS).

It climbed to avoid Qantas Flt 581, which had been given an instruction from air traffic control to climb.

Flight 581, also an A330, was heading from Sydney to Perth at 38,000ft when its pilots asked for permission to climb.

That permission was given by Airservices Melbourne Air Traffic Control centre but was rescinded shortly afterwards when the error was apparently detected, but not before the TCAS alerts were activated.

Airservices ATC system also has an alert system called Short Term Conflict Alert but it is yet known if that activated.

While the aircraft came within 700ft of vertical separation it is yet to be determined what lateral separation they had.

Qantas chief pilot Phil Green said the airline was “full of praise for the pilots involved”.

“These pilots have years of experience and handled the 8situation exactly as they have been trained to,” Capt. Green said.

The Australian Transport Safety Bureau the country’s crash investigator called the near miss “serious” and has started an investigation.

Australia has had 53 serious loss of separation incidents in the past 10 years.

TCAS was developed through the 70s and 80s and became mandated in the 1990s.

All commercial aircraft seating more than 30 passengers (In some countries 19) must have TCAS fitted.

To read how it works see here. 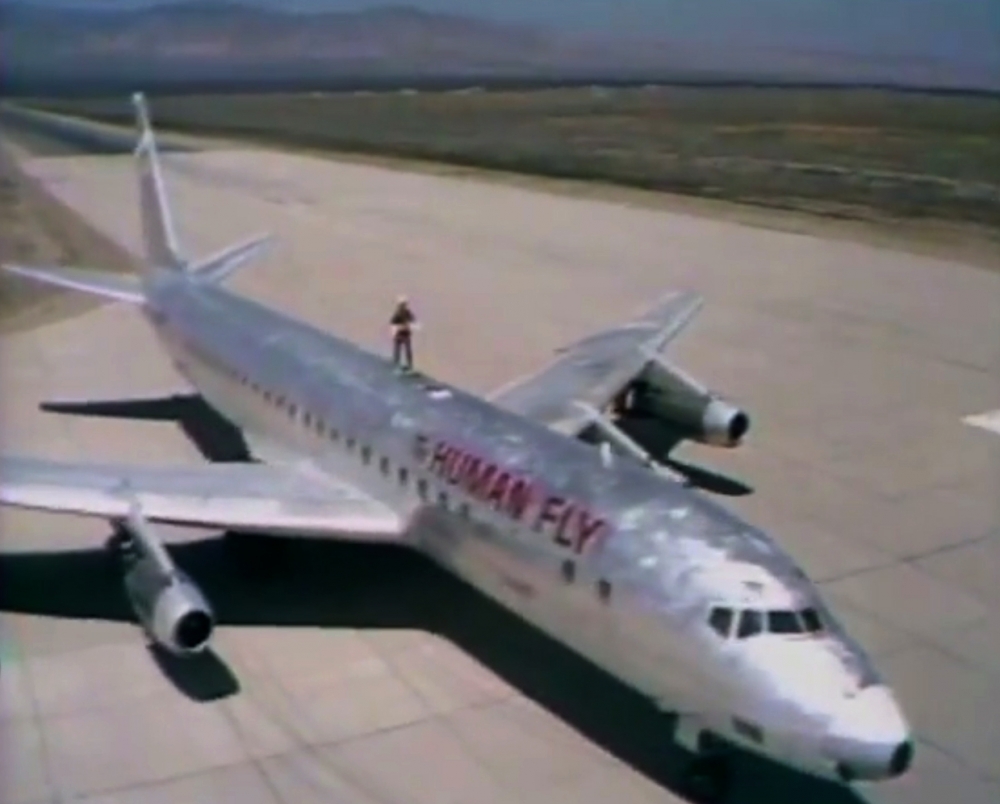 Arguably one of the most spectacular aircraft stunts ever was performed by Canadian Rick Rojatt dressed up as comic book super hero the Human Fly. (See the video clip below)

In the early 1970s Rojatt teamed with famous US pilot Clay Lacy to ride atop a four engine Douglas DC-8.

The stunt was performed several times at speeds of up to 300mph (480km/hour), mainly in California.

Lacy, number one pilot for United Airlines when he retired is one of the most experienced pilots of the modern era and flew the DC-8 as low as 200ft in a high speed pass that thrilled crowds.

Very few pictures exist of the various events and till very recently no video was available.

However Clay Lacy Aviation has recently released a 23 minute video of one of the several stunts which you can see below.

The whole video is well worth watching.

The stunts were not without incident. In one appearance in Dallas Lacy flew through an unexpected rainstorm and the rain left Rojatt badly bruised because of the speed of 200mph plus.

We have edited a short clip of the stunt which is below.

The full 23 minute video can be found here.

Go to www.claylacy.com for more information on Clay Lacy

A350 XWB joins the fleet 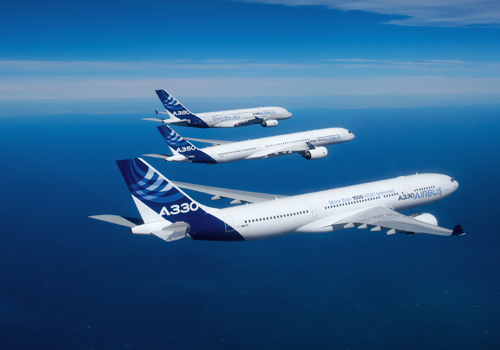 Three widebody Airbus aircraft, the A380, A330 and the new A350 XWB, took off from Toulouse Thursday September 19 flying together for the first time before continuing on separate flights.

The A350 XWB is the latest aircraft from Airbus and is designed to replace the A330 and takeon Boeing’s 787 and 777 families.