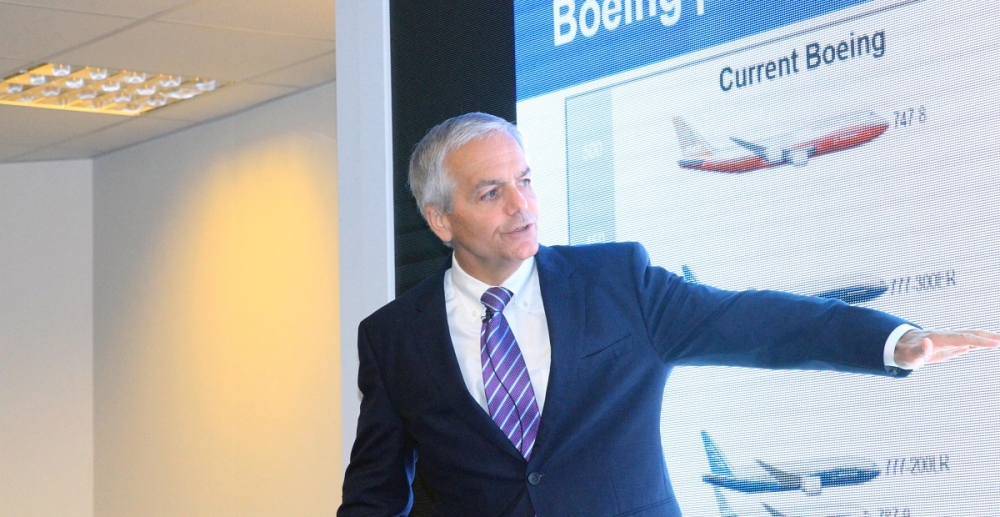 “Our aircraft fly higher, faster and further and more efficiently [than the competition].”

Boeing’s  SVP of Global Sales and Marketing John Wojick opened the 2016 Farnborough Air Show with this bold statement  that Boeing was better equipped than Airbus to supply the world’s airlines to meet the soaring demand.

Mr Wojick answering a question about the success of Airbus’s 230-seat A321 NEO said he was very happy with Boeing’s record backlog of 5740 aircraft worth $424 billion.

Boeing’s VP of Marketing, Randy Tinseth, said that Boeing’s forecast demand for 39,620 new aircraft worth $5.9 trillion over the next 20 years,was an increase of 4.1 percent over last year’s forecast.

“Despite recent events that have impacted the financial markets, the aviation sector will continue to see long-term growth with the commercial fleet doubling in size,” said Mr Tinseth.

“We expect to see passenger traffic grow 4.8 percent a year over the next two decades.”

The single-aisle market will be especially strong with low-cost carriers and emerging markets driving growth. He said that 28,140 new airplanes will be needed in this segment, an increase of more than 5 percent over last year.

“There’s no question the heart of the single-aisle market is around the new  [186-seat] Boeing MAX 8 and the current 737-800NG. Aircraft of that size already account for 76 percent of the global single-aisle backlog, and our products have the clear advantage in that space.”

With cargo traffic forecasted to grow at 4.2 percent per year, Boeing projects the need for 930 new freighters and 1,440 converted freighters.

Airbus the giant European based multi national, also released its forecast for the 20 years to 2035.

It says that passenger traffic will grow at an average 4.5 per cent a year, driving a need for over 33,000 new aircraft above 100 seats worth US$5.2 trillion.

By 2035, Airbus says the world’s aircraft fleet will have doubled from today’s 19,500 aircraft to almost 40,000. Some 13,000 passenger and freighter aircraft will be replaced with more fuel efficient types.

It says that globally, by 2035, 62 percent of world population will be city dwellers and the number of aviation mega cities will rise from 55 to 93 by 2035.

These centres of wealth creation many 47 of which are already schedule constrained airports, will account for 35 percent of world GDP. In 20 years the number of daily long haul passengers travelling to, from, or via aviation mega cities, will more than double to 2.5 million.

Airbus Chief Operating Officer, Customers John Leahy said that “while established European and North American markets continue to grow, Asia-Pacific is the engine powering growth in the next 20 years. China will soon be the world’s biggest aviation market and together with emerging economies, further population concentration, and wealth creation, together these will help to fuel strong air traffic growth.”

“We are ramping up production to meet market demand for our leading aircraft products and we will also ramp up our customer service offerings to meet the increasing demands of air transportation.”

In the wide body market, Airbus forecasts a trend towards higher capacity aircraft and forecasts a requirement for over 9,500 wide body passenger and freighter aircraft over the next 20 years valued at some US$2.8 trillion. This represents 29 per cent of all new aircraft deliveries and 54 per cent by value. Most wide body deliveries (46 per cent) will be in the Asia Pacific region. In this segment says Mr Leahy, Airbus’ A330, A330neo, A350 XWB and the A380 offer the most comprehensive wide body product range between 200 and above 600 seats

In the single aisle market, where the A320 Family and the latest generation A320neo Family are firmly established as the global market leaders, Airbus forecasts a need for over 23,500 new aircraft worth US$2.4 trillion.