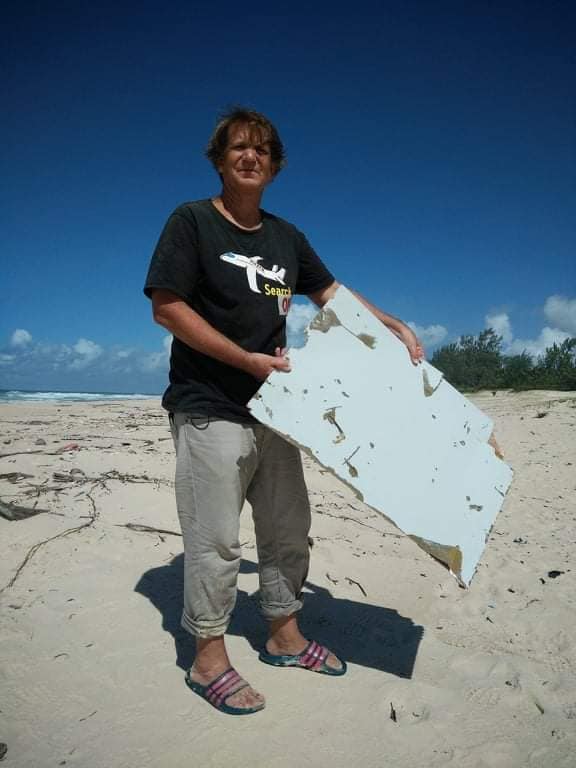 New images of MH370 debris have been released by wreck hunter Blaine Gibson who is responsible for finding or securing the majority of the Boeing 777.

Mr. Gibson says many ask him if he was happy to find No Step, (below) the first piece of 370 debris he discovered.

“No I was not, finding aircraft debris from a crash makes one sad. I felt a sense of accomplishment and responsibility to ensure the debris was handed in and investigated. The families and flying public want and deserve the truth whatever it may be, and I hope I can do a small part to contribute to that. Happy would be if I found 239 people on that sandbank grilling seafood and sipping on coconuts saying “what took you so long ?”

“Of all the 370 debris I have found and held in my hands, this, below, is the one that brought on the most emotion, a lump in my heart and tears to my eyes. Because this is something we can all relate to, the case around the TV screen on the back of the seat in front of you. We all look at it for hours on long flights. And it may be the last thing someone saw.

The floor panel, below, was found by locals in Sandravinany Southern Madagascar says Mr. Gibson.

This debris, below, from Antsiraka, was handed in by a local after hearing the radio appeal by MH370 families.

Below are photos of the consular debris from Antongil Bay Madagascar. Delivery delayed by 2 years due to investigation into 2017 assassination of Honorary Malaysian Consul. Finally delivered to Malaysian authorities in September 2019. Investigation pending still no results released. identified by IG from photos as baseplate of vortex generator on the right engine.

Suspected personal effects were also found and handed over in Kuala Lumpur.

Interior cabin debris, below, held by the little girl Lendra who found it at this location. She was using this debris to fan the fire in the woodstove at her grandmother’s guest bungalows nearby.

Below is part of MH370’s right landing gear door.

Below are three images of debris from Riake Beach Isle Ste Marie, Madagascar in June 2016.

This image is interior cabin debris found at Antsiraka Beach in late June 2016.

This is another shot of “No Step” being handed over in Maputo to Director of Civil Aviation Mozambique Joao Martins de Abreuwhich. No Step was found by Mr. Gibson at Paluma Sandbank, Mozambique on February 27, 2016.