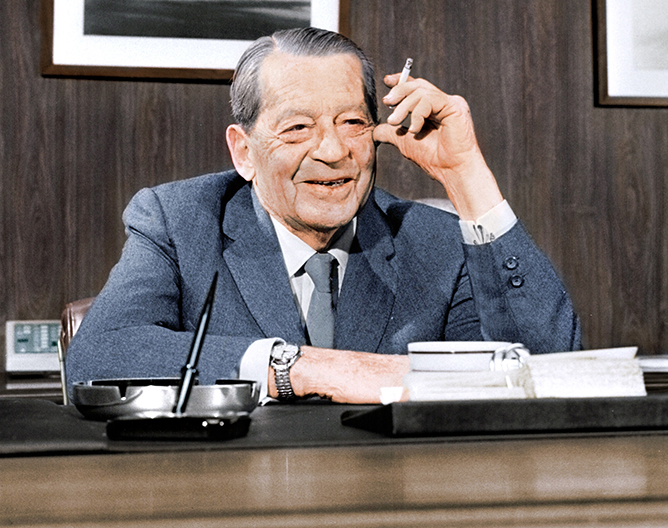 Commissioned by AirlineRatings.com Mr Vienne, a history student, who lives in France, has done a magnificent job bringing to life Boeing Historical Archive images of Mr Douglas as well as other aerospace executives.

The first image in this selection is a picture of US President Franklin D Roosevelt presenting Donald W. Douglas Snr with the Collier Trophy in 1935.

The second image is of Mr Douglas, extreme right, with executives and guests about to board the DC-4E.

These next images are taken from that test flight in 1939.

The next image below in this selection is again a picture of US President Franklin D Roosevelt but this time in the Douglas Aircraft Factory at Long Beach with Donald Douglas and other executives. Mr Douglas was charged by President Roosevelt with organizing US aircraft production during WW11.

This image below is a fine study of Mr Douglas at his desk during the war years.

The next picture taken after WW11 is of the Super DC-3 which Mr Douglas tried unsuccessfully to interest the airlines in.

After the war, Douglas pressed ahead with developments of the DC-4 in the form of the DC-6 and DC-7. This shot is of the Douglas board in Santa Monica with a model of the DC-7 that American Airlines insisted on the company building, which meant it shelved designs for a jet transport.

A delightful picture below captures the humor in the staff canteen with fellow executives.

READ: History of the magnificent DC-8

A great shot of Mr. Douglas with models of all the Douglas Aircraft commercial models.

Celebrities were a big part of aviation in the 1940s and 50s. This shot below captures Mr Douglas with Clark Gable.

Another of my favourite shots is Mr Douglas on his first DC-8 ride in 1959.

Possibly my all-time favourite of Mr Douglas and his son Jnr on the production line of the DC-9, which was, with the Super DC-8s, about to turn the company’s fortunes around.

The next image shows the DC-9 with all the key Douglas executives and engineers responsible for the program.

Unfortunately, the success of the DC-9 and Super DC-8s came at a time of severe parts shortages because of the Vietnam War. The rapid ramp-up in production caused chaos in the plant and forced a merger with McDonnell Aircraft Company. That first aircraft from that merger was the DC-10 and at the rollout Mr Douglas (left) is joined by Mr McDonnell and US VP Spiro Agnew.

At the delivery of the first DC-10s to American and United Mr. Douglas is joined by famous American Airlines President C.R. Smith (Left), Gloria Swanson and then AA President George Spader.