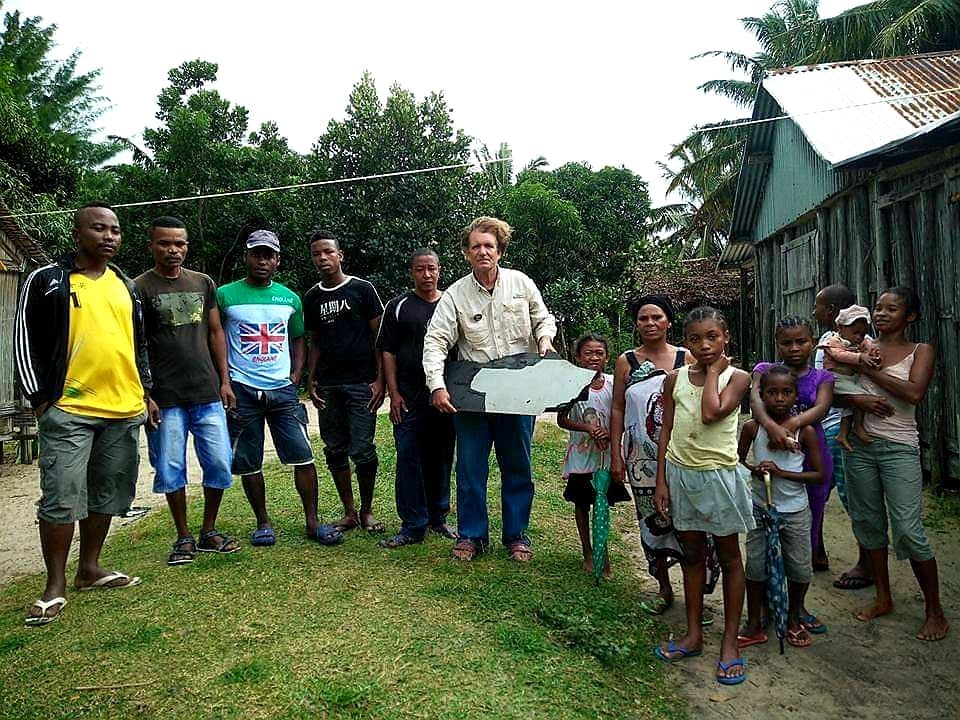 There have been over 30 pieces of debris found from MH370- either confirmed from the actual plane or from a Boeing 777.

The search in the southern Indian Ocean didn’t start until 10 days after the loss of MH370 and that was well to the south of where the 777 is now thought to have crashed.

In that search, debris was spotted from a New Zealand Air Force search plane but it could not be located by search ships and the first physical debris was not found until July 29th 2015.

That was the 777’s right Flaperon found in Reunion by Johnny Begue.

Almost five months later on December 23, 2015, Schalk Luckhoff found an engine cowling nameplate “Roy” in South Africa. He photographed it but did not hand it in because of the smell from all the barnacles attached to it. Three months later Neels Kruger stumbled across it – now minus the barnacles that had died and dropped off – and handed it in.

Into 2016 the debris finds accelerated with famous wreck hunter Blaine Gibson (below) finding a horizontal stabilizer panel “No Step” in Mozambique on February 27.

Mr. Gibson had sought guidance from the highly respected Oceanographer Professor Charitha Pattiaratchi who is based at the University of Western Australia.

“The simulations that Chari ran which predicted where debris would go and when it would arrive were done from about 32.5° S  96.5°E,” Mr Gibson said.

“Chari has always said that the location of MH370 would be found most likely between 32 and 33 degrees south.”

The actual location from the breakthrough tracking done by aerospace engineer Richard Godfrey is 33.192S 95.194E which is around 6nm (11km) to the east of the 7th Arc and extremely close to Prof Pattiaratchi’s drift model.

Mr. Gibson quickly became the focus of the debris hunt with his encouragement to locals to look for debris and hand it in.

“Media publicity from the discovery of No Step resulted in private citizens being on the lookout, recognizing, finding, and reporting more debris,” Mr. Gibson said.

And that attention paid dividends with cabin divider bulkhead debris found in Rodrigues by Jean Dominique and Suzy Vitry on March 30, 2016.

Mr. Gibson then found three items of debris in Madagascar on June 6, 2016 and another 2 pieces on June 12 and three more later that month, many from within the 777’s cabin, including the monitor case from the back of an economy class seat. He later found more small pieces of interior cabin debris.

“These pieces and the cabin divider proved that MH370 shattered on impact and was not gently flown onto the sea,” Mr. Gibson said.

A major find was on June 20, 2016, when an outboard flap – that was originally positioned next to the flaperon – was found in Tanzania by local fishermen (below).

Investigators found that the damage to that flap could only have been done if it was stowed indicating that the final moments of the flight were not controlled.

Then on August 26, 2016, a piece of the right vertical stabilizer was found in Mozambique by Jean Viljoen.