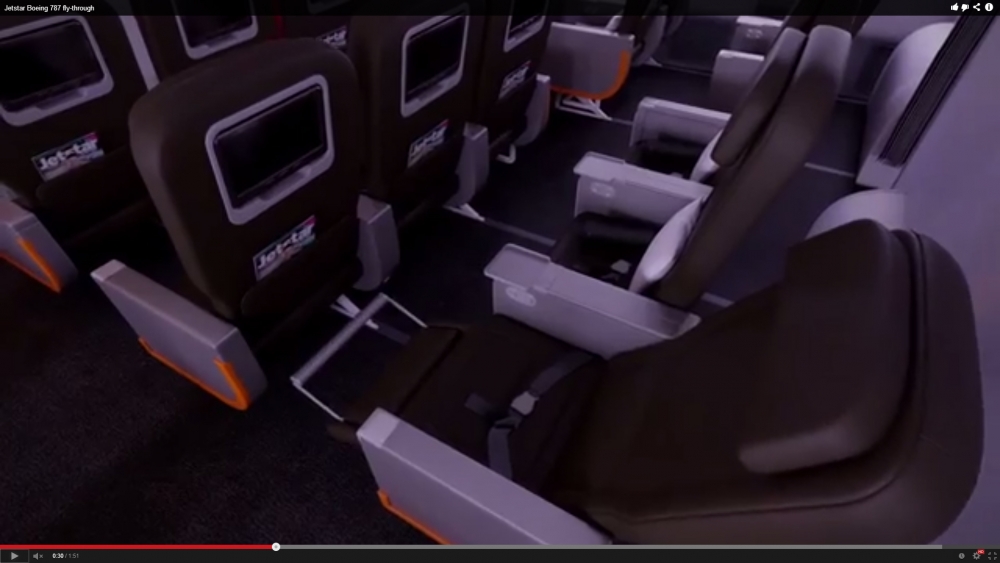 Jetstar has released a video (below) of its new 335-seat Boeing 787, the world’s most technologically advanced commercial plane.

The 787 will have 21 leather business class seats in a 2-3-2 configuration with AC and USB connections and a large seat back video. The seats are made by Recaro and have a seat pitch of 38 inches.

Jetstar has fitted 314 economy seats in a 3-3-3 layout and all have USB connection with the Panasonic eX2 in-flight entertainment system. The seats which also have shared AC power are set at 31-32 inches apart (mostly 31in).

Jetstar’s first 787 will arrive in Melbourne on October 9 and will then conduct test flights around Australia for certification and crew training before operating domestic sectors in November ahead of its international debut in December.

Jetstar is yet to reveal the flying schedule but the airline’s program director Mark Dal Pra said the airline was keen for as many Australians as possible to experience the state-of-the-art plane.

The Boeing 787 is the most technologically advanced commercial aircraft in service with many features not found on any other.

The major key to its quantum leap is the carbon fibre-reinforced polymer composite construction, which is lighter and stronger than traditional aluminum and does not corrode.

This allows higher cabin humidity and less pressurization to eliminate negatives of flying such as dehydration and mild altitude sickness.

Other advances are its big windows which help in reducing claustrophobia and a gust suppression system on the wings to counter turbulence.

This system cuts the impact of turbulence by over 60 per cent.

However all this technology – the greatest advance in aviation since the introduction of jets in the 1950s – has come at a price.

The 787 is up to five years late for some airlines due to production and design issues.

But airlines have stuck by the 787 due to its technology and promised fuel cuts of about 20 per cent over the planes it will replace.

Jetstar will get 14 787s which will replace its A330s while Qantas has commitments for 50 of the larger 787-9 which can seat 40 more passengers and fly further.

The plan is for Jetstar’s A330s to be refitted and used by Qantas on domestic routes until its 787s arrive after 2016.