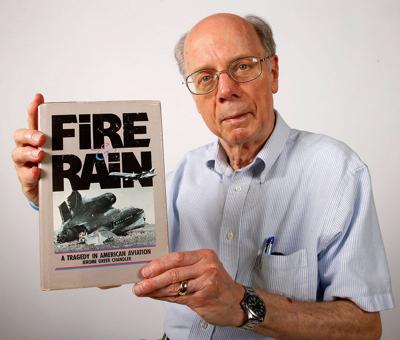 It is with profound sadness that AirlineRatings.com announces the passing of its Technical and Safety Editor Jerome (Jerry) Greer Chandler on Thursday, August 15th.

Jerry (71) succumbed to Parkinson’s disease and passed away quietly with his family around him.

Recently retired after 30 years of teaching writing at Jacksonville State University, Jerry has been a professional aviation journalist for over a quarter of a century.

In 1986 his best-selling book Fire & Rain chronicled the crash of Delta Flight 191 at DFW and its was subsequently made into a TV film on USA Network.

He appeared over the years on CNN, MSNBC, NPR, ABC, Nova and the National Geographic Channel in his capacity as an aviation safety “observer” as he hated the term “expert.”

He authored over 1,500 articles, consulted on three made-for-television films, wrote two books and managed to support a family of seven.

He also helped write two other books Green Wings and Greener Wings which chronicle Aviation’s true impact on the environment.

In early 2013 he joined AirlineRatings.com.

In 2011 he had the privilege of beginning work as a regular contributor on medical matters to VFW magazine, which sprang from his “stint” as an Army combat medic in Vietnam, where he was wounded in July 1970.

Jerry was awarded the Purple Heart in Vietnam.

In 2017 Jerry was awarded the prestigious Lifetime Achievement Award at the 2017 Aerospace Media Awards banquet in Paris, France.

Jerry said of the recognition at the time, “It’s a real honor, one that I will treasure always. Thanks to all who helped along the way — my family, editors, and colleagues. I’m humbled.”

Jerry’s passion for aviation started when his Dad took him to Dallas Love Field to watch DC-6s, DC-7s take off and land.

But that passion took a tragic turn when two relatives died in separate air crashes.

Jerry wanted to know more about why those accidents happened.

“No assignment was too much trouble; Jerry’s depth of aviation knowledge was amazing as was his list of contacts. He knew everyone and what is more, they knew him and respected Jerry and would always help on or off the record.”

“We at AirlineRatings.com will miss his friendship, dedication and humour dearly.”