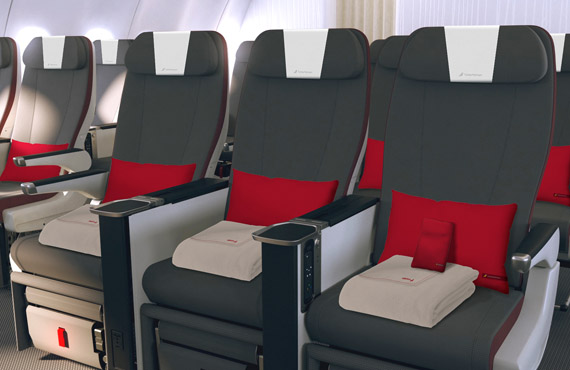 Iberia will offer a premium economy product on its long-haul fleet from next year in a move that brings the Spanish airline’s widebody cabin configuration in line with the other IAG airlines flying long-haul.

The first premium economy-equipped Iberia aircraft will enter service next summer on routes connecting the airline’s Madrid hub to Chicago O’Hare in the U.S. and to Buenos Aires, Bogota and Lima in South America.

Iberia did not specify how many premium economy seats it intends to install on its aircraft but said the seats would be 19 inches wide with a 37-inch seat pitch between rows, compared to 17- or 18.1-inch width and 31 to 32-inch seat pitch on its A330/ A340s in standard economy.  Seat-back entertainment screens will be 13 inches wide, as opposed to the 9-inch screens in standard coach. Iberia says the new seats recline by an additional 40 per cent over those in its standard economy cabin.

Customers flying in premium economy class, or turista premium, will also enjoy adjustable head and foot rests, get noise-cancelling earphones, a blanket and an amenities kit. In addition, premium economy passengers will have priority in boarding and leaving the aircraft, better food options and an increased baggage allowance.

Iberia may be one of the last European legacy carriers to introduce a premium economy, but it will be the only airline with the concept flying between Spain and Latin America, according to its  Chief Commercial Director Marco Sansavini.

“Iberia is the sole airline that will offer this intermediate seating class on direct flights between Spain and Latin America, which should strengthen our leadership of this market,” he said.

Virgin Atlantic was the first airline to come up with the concept of a premium economy class in 1992 as Mid Class, a service aimed at the cost-conscious business traveler who travelled economy but still required extra space in which to work or relax. The product was rebranded as Premium Economy in November, 1994.

Premium economy is well established with full-service international carriers in Europe and Asia, but it is rare in the Middle East and U.S. legacy airlines are only now jumping on the trend.

American Airlines, a partner of Iberia in the oneworld alliance, will introduce premium economy on its new Boeing 787-9 aircraft with cabins featuring 21 leather seats with a 38-inch pitch and an increased width with a 2-3-2 arrangement. Premium economy passengers receive priority check-in and boarding, enhanced meals with complimentary wine, beer and spirits and amenity kits.

The airline’s first 787-9 was delivered Sept. 13 and it will have four by the end of the year, from an order for 22. But it will only start selling a seat in premium economy from early 2017.

Delta Air Lines will introduce premium economy when it takes delivery of its first Airbus A350,  due in Spring next year.