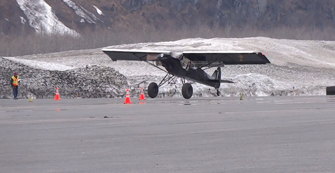 There is no first class on these planes.

Nor movies, nor champagne – not even budget economy class with a glass of water!

For these are the planes that will take you to the wilds of Alaska where jumbos fear to tread and where there are no runways – just the occasional sand bars on the side of a streams or just small patch of grass.

All the pilots of these planes need to land is an 18mtr clearing not the 3000mtrs of concrete that an A380 super jumbo requires.

For that was the winning distance at the 2013 annual fly-in at Valdez Alaska where pilots of these Short take-off and Landing (STOL) planes fight it out to land on a dime.

And not only is there a large crowd watching the dare devils but black bears and Dall sheep watch on the surrounding hills.

The pilots are often veterans of their craft with more than 25,000 hours of flying in remote Alaska.

And the best planes are typically heavily modified.

According to Wired.com there are four categories for competitors at the Valdez fly-in.

While modifications can be made they must be approved for use on production planes.

However on the alternate bush category anything goes but the changes must be built under the US regulator’s experimental category.

Or pilots can build a design from the ground up.