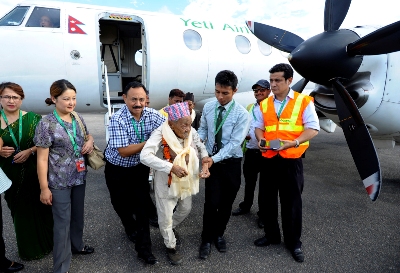 A social organization was visiting Mr Rai recently when Mr Rai asked them to help him get on a flight rather than spend time checking on his health condition during the visit.

In response to his wishes, Yeti Airlines flew 106-year-old Mr Rai to Kathmandu where he stayed overnight at a hotel in Guashala. He was also taken on a tour of Pashupatinath by representatives of the airline before flying back home.

He was accompanied on his unique journey by his 75-year-old nephew Man Bahadur Rai.

On arrival, Mr Rai said that he was very pleased to be on a flight after 106 years. He also said he enjoyed the sweets offered in the aircraft and did not feel like he was flying while in the air.

“My wish has come true, but I did not feel like a bird flying or inside an aero plane. Now I have had enough, I want to go home,” said Mr Rai speaking to the media on arrival at the airport.

Born to an underprivileged family in the hilly district, Mr Rai never thought that one day his lifelong cherished dream of “flying in a plane up in the sky like a bird” would come true.